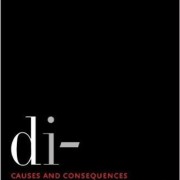 God hates divorce. That doesn’t leave a lot of room for interpretation. The state assumes that stable marriages are in the best interest of the state itself. Despite this the average marriage lasts only seven years and the divorce rate has impacted 40% or more of all marriages since the early 1970s. The blissful union of marriage is often found to have cracks – sometimes severe cracks – that challenges individual marriages and the institution itself. The book Divorce: Causes and Consequences tears apart what divorce is, how prevalent it is, and what the impacts are.

Using the standard of the bible there are three accepted reasons for a divorce. The first one is the “obvious” and most direct answer of adultery. The language in Matthew 19:9 is relatively clear and indicates that if a spouse chooses to have sexual relations with another person outside of the marriage that this is grounds for a divorce.

The second reason is an obvious social reason – abuse. Here the language is a bit less direct but still present (see Malachi 2:16 and Ephesians 5). All too often the victims of abuse are pushed into staying in bad marriages by the fear that in the eyes of the church and the community they won’t have been faithful to the vow they took. However, the reality is that God never intended for anyone to be abused in a marriage relationship. The only challenge here is what constitutes abuse and what is not. Generally, by the time that people are willing to confront this concern the abuse is obvious.

The third reason is abandonment. That is, when a spouse abandons another. This is really a special form of abuse. Here the bible says that a married couple shouldn’t deprive each other except for a short time. (See 1 Corinthians 7) While this is speaking specifically about martial sex – the broader application is that wives and husbands are supposed to be of one body – and you can’t abandon a part of your body.

Despite God hating divorce, there are biblical reasons why divorce is acceptable – and even righteous.

The Lesser of the Evils

God hates divorce is an absolute statement. There’s nothing to compare it to. And it’s in this context that divorce is most often considered. All things being equal who wouldn’t choose a healthy marriage instead of divorce. However, in this is the fallacy that marriages that aren’t divorcing are healthy marriages. It probably won’t take you long to think through your friends, your parent’s friends, and your grandparent’s friends to find a marriage where both parties are engaged in a silent warfare. Instead of protecting each other from the outside world, they’re the ones wielding the knives.

Which is the lesser evil: Divorcing amicably, or continuing to harm each other and any children? From a research point of view the answer is clear. Children are best in health marriage relationships. However, when confronted with unhealthy marriages or divorces, children are more successful after divorce than they are subjected to the unhealthy marriage.

So while divorce shouldn’t be the first option – for the sake of the children it needs to remain an option.

While it’s generally believed that the divorce rate is climbing, it’s actually been recessing slightly since the 1980s. Take a look at this graph from the book:

However, these numbers aren’t unique to the United States. While we have a higher divorce rate than other countries, all countries experienced a rise in divorce rates. See another figure from the book: 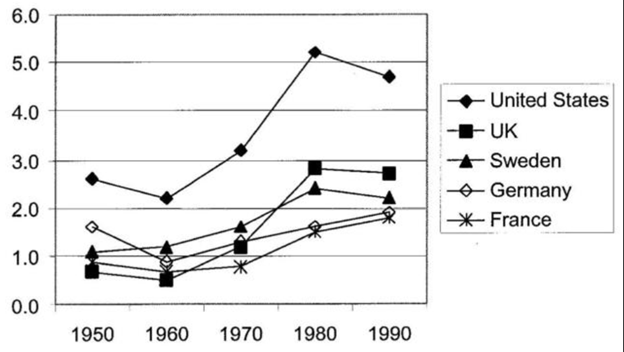 So while the US was experiencing higher divorce rates – so was the rest of the world. The spike in divorce rates immediately after World War II had some concerned that the rise of women participating in the workforce had contributed – and continues to contribute – to the divorce rate. However, the data seems to indicate that some part time work makes women happier and their marriage relationships more durable.

While the numbers from the 1960s to 1980s marked a steep increase that is likely due to changing laws and attitudes that allowed divorce for a broader set of reasons and the abandonment of unhappy and unhealthy marriages.

While divorce is a legal concept, it’s also got different components that evolve over different periods of time. Paul Bohannon’s model of the components of divorce is:

One of the clearest consequence of divorce is downward mobility. That is that having two households rather than one is more expensive and therefore both parties cannot maintain the same standard of living that they might have enjoyed before. So with the host of issues surrounding a divorce, how do you rebound from a divorce?

The answer seems to lie in strong friendships. Whether it’s a new romantic relationship or preferably a strong friend or two to carry you through, those with strong friendships fared better than those who didn’t have strong relationships. (See Change or Die for more on the impact of relationships.) Emotional Intelligence quoted a 1987 Science article as saying that isolation “is as significant to mortality rates as smoking, high blood pressure, high cholesterol, obesity, and lack of physical exercise.” Divorced persons with health problems die earlier than their married counterparts. In other words, relationships are key. With the death of a major relationship it’s important to cultivate others.

That is not to support frantic socializing but rather to encourage healthy dating. The research seems to show that when men are frantically social they tend to be less happy and more distressed. So while some level of socialization is appropriate and healthy, filling every night on your calendar to prevent yourself from processing the loss is not.

Death is a good metaphor for dealing with divorce. (See On Death and Dying for more on how to cope with death.) In reality divorce is the obituary for your marriage. It signals the end of what was – including your dashed hopes and missed opportunities. Grieving for the loss of your marriage is appropriate and healthy.

Wallerstein defined three different profiles of adjustment. There were the survivors who were scarred by the divorce but kept struggling to move on – sometimes unsuccessfully but mostly succeeding. The second profile was the successful adjusters. These people resolved the past issues, accepted their mistakes, changed their behaviors, and functioned more adaptively. The final group were the losers who were unable to escape the pull of the divorce being the central spot in their thoughts and emotions.

The key it seems to healthy living post-divorce is to learn lessons from the divorce but to not ruminate about the divorce or how you are the victim of it. (See Boundaries, Beyond Boundaries, Daring Greatly, and Change or Die for more on victimhood.)

Children are the “collateral damage” in a divorce. That is, they weren’t a part of the cause, but they’re stuck with some of the impacts. One of those impacts is that they’re more anxious and upset. They wonder if they caused the divorce and wonder if both of their parents still love them. They wonder where they’ll live and sometimes if there will be enough to eat.

Children also have the tendency to grow up too quickly. They become the parent’s confidant. Sons become “the man around the house.” This happens in part because of the void left in the parent’s lives and their inability or difficulty in managing their own responses. Mothers were found to be more irritable, unresponsive, erratic, and punitive. They had more trouble controlling their children, especially their sons. Children try to adapt their responses to compensate for their parents but create a gap in their own childhood in the process. They try to reverse roles with the parent and take on responsibility for the emotional needs of the family. This additional pressure can make them feel more depressed.

Years later when they try to form relationships the scars will become apparent for both the rapid growth and their difficulty in seeing what a healthy relationship should look like. It’s hard to have a healthy relationship with another human being if you’ve never seen it yourself. While not strictly speaking an outcome of the divorce itself – instead being a symptom of the dysfunctional relationship that created the divorce – the impact of “normal” being defined as what you grew up with and that “normal” being dysfunctional requires a great deal of work to get around.

The best thing that a parent can do to help their child is to become emotionally healthy themselves. Any divorce is going to leave bruises and scars. It’s incumbent on the parent to do what they need to do to get healthy.

Children still need to remain children. That includes supervision of their habits and their school work. Checking homework to make sure it gets done and monitoring what they’re watching on the TV or on the computer. Simple things like regular mealtimes and regular bedtimes establish a routine that is comforting.

The rules should be clear and discipline should be firm but flexible. The structure reduces the uncertainty and paradoxically the firm discipline reminds the children that they don’t need to be in control. They can depend on their parents to be parents. Discipline and rules aren’t all that’s needed. Nurturance is also needed. That is a loving and responsive posture towards the child which acknowledges that they’ve got their own limitations, faults, and fears.

When parents treat their children like they’re an aunt, uncle, or grandparent and fail to establish and maintain appropriate guidance, children have more difficulty adjusting to the divorce. Being the “fun parent” may seem like you’re loving your children through the process, however, the research says that for both parents – but particularly for the custodial parent – this is dangerous.

In most cases divorced individuals will eventually find themselves married again – or at least in a serious live-in relationship. In an upcoming review I’ll address this in more detail – but for now there are a few key insights to step parenting laid out in Divorce.

First, most second marriages are better than first marriages. Apparently divorcees learn from their mistakes and stop making them.

Second, the best way to step parent is to stay in sync with your spouse. The most successful step parenting relationships are those where the couple focus on maintaining their bond and presenting a unified front to the children.

No one sets out in live to be a divorcee. However, despite this many find that this is the best answer for them. Reluctantly many adults find themselves trying to figure out how to cope with the loss of their marriage. Divorce has clues on how to navigate the waters of divorce and move on.

Book Review-Play: How it Shapes the Brain, Opens the Imagination, and Invigorates...
Scroll to top
%d bloggers like this: