Blog
You are here: Home1 / Blog2 / Personal3 / Thoughts on Optimisim and Pessimism 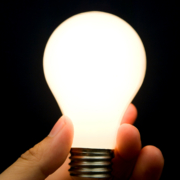 Thomas Edison was once asked about his failures in creating the light bulb and his response is often quoted as “We now know a thousand ways not to build a light bulb.”  That’s a dedication to staying positive that few (if any) of us could muster these days.  It’s a passion for creating the light bulb that would not be discouraged.
Through some of the reading I’ve been doing lately, I’ve been consumed with thoughts about how you perceive the world around you will drive how the world around you becomes.  This probably isn’t true in the literal sense (however, I wouldn’t discount it.)  What is true, however, is that we have two types of people: The optimist, always believing that there is more than their really is – but happy in that thought, and the pessimist, always believing that there is less than there really is – and miserable or fearful in that thought.
The classic is to place a glass with water equal its total capacity and ask if it’s half empty or half full.  The optimist is supposed to answer that the glass is half full while the pessimist answers that it is half empty.  A few severe pessimists, and I know some, would tell me that the glass may only be half empty now but due to evaporation, perhaps a crack in the glass, unidentified forces, etc., they’re sure that the glass will eventually become empty.  (It’s about that time that I reach over and drink it to prove their point.  It’s a fun thing to do.)
So there’s nothing new here.  You already have heard these things.  But what you may not instinctively realize is that optimism is its own reward.  Sure, I have to accept disappointment.  I’ve set the bar higher. I’ve decided to expect that things will go well, that life is ultimately good.  In return, I get to delude myself into a happy state.
And, of course, the “storms” will come, as they always do to try to convince me that the world is an ugly place.  And at those moments, I’m frustrated, disappointed, and worse.  However, that happens so rarely, that I get most of my days filled with happiness.
The mother of one of my friends is a pessimist, the kind that believes in evaporation, she recently shared with her daughter – “See, I was right.” It was in reference to some pessimistic “The sky is falling” prediction.  The answer back was the classic answer from an optimist: “So what, if you always predict something bad will happen – eventually you’ll be right about one of them.”  In other words, the optimist doesn’t have to assume that everything will always go right, they can be realistic about bad things happening, and they just believe that it’s a small proportion of every day life.
Fairly recently we were at a zoo and had our son’s wagon stolen.  We were able to recover it in relatively short order, however, its impact on our son’s small mind was fascinating to watch.  It had never occurred to him that someone would steal.  Why would you take something that wasn’t yours?  This plus trying to figure out both mommy and daddy’s reactions was putting his poor little mind into overdrive.  The end result was we got the wagon back.  He still vividly remembers the incident (perhaps too vividly.)  He has changed his behavior.  He still takes his wagon to the zoo; however, we keep a closer eye on it.  He didn’t give up.  He didn’t refuse to enjoy the zoo just because a bad thing happened – he simply is more aware of the possibility of a bad thing happening and tries to plan for it as best he can.
So my parting thought, a quotable, is simply this:
“Failure is only not trying because there is no hope of success.  Persistence guarantees eventual success through hope.”
Be an optimist, what do you have to lose?

Article: Avoiding Coupling in Your Portal Implementation
Scroll to top