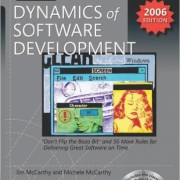 More than 10 years ago Jim McCarthy wrote the first edition of Dynamics of Software Development.  At that time it was a great book.  It helped identify specific behavior patterns that software development teams fall into.  Perhaps the most familiar behavior pattern is flipping the “Bozo bit” – in other words writing someone off as not a valuable member on the team.  Small nuggets of insight like this one are woven together into a tapestry of the behaviors you don’t want to see in your team.

But that’s where the 1995 edition of the book stopped.  You knew what you didn’t want to see and had sign posts to alert you that they were coming.  However, there was very little in the way of support for creating the right kind of behaviors and exterminating those behaviors that you had been warned about.

The 2006 edition in addition to the 1995 content has content designed to support your transition from a team where these behavior patterns are the norm to one where you’re looking for the rare case where there’s some bad patterns emerging.

The “Core System” as Jim and Michele McCarthy describe it is a set of patterns, antipatterns, and “Core Protocols.”  The “Core Protocols” are as set of specific behaviors which support the proper working of a software development team and inhibit the growth of some of the other patterns that are not so favorable.

Dynamics is a book that every development leader should read.  More than that — it is a book that should be used as content for team meetings.  By dissecting one of the 57 rules included in the book you can generate a few minutes worth of discussion on a single, important software development project so that you can move the team forward, one sound byte at a time.