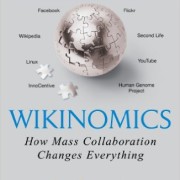 I have to let you in on a secret. I don’t do this blog for you.  Not that anyone could honestly say that they do a blog for one specific person other than themselves.  You see while I’m happy that you (hopefully) find value in this blog.  That isn’t the real reason why I do it.  I do it because I am forgetful.  I need to remember stuff and frankly my memory doesn’t cut it anymore.  So I blog solutions, I collect information, and that way I can find it again – and my friends and clients can find it by searching.  (I’ve told many a client to search my blog for their answers.)

That isn’t to say that some posts aren’t really for you.  There are some that definitely are.  There are posts that exist because there was a client that wanted or needed something documented and they said it was OK to put it on the blog.  There are some intensely altruistic moments when I do truly do things for you – whoever you are – but mostly I don’t.

That’s why Wikinomics is so scary.  What do I mean by scary?  Well, I mean that I still don’t get the social networking animal.  Lawrence Liu has been patiently tutoring me, but still, I’m not 100% in the groove with it.  I still haven’t told you why Wikinomics is so scary … it shows real examples of how the power of social networking has brought about dramatic shifts in the way that we do business.

Everyone reading this blog probably has heard of Linux.  Most folks probably know it is open source.  It’s one of those examples people lay out when they talk about the new way that we’re working.  However, to let you in on a secret, it’s not really all about social networking – Linux is about many things not the least of which is a way for non-Microsoft organizations to make money.

Perhaps the most powerful mass market example – from my perspective – is Wikipedia.  Want to know about something?  Go to Wikipedia.  As long as someone like Stephen Colbert hasn’t been mucking with the pages you can generally get some good information on a variety of topics – for free.  There’s information there that I didn’t even know existed.  For fun, go to Wikipedia and query for your favorite corporation.

After a book full of examples of popular and less than popular examples of how the power of large numbers of people can change the world, I’m wondering what changes are coming that we’re not even seeing yet.  I must admit that I was genuinely concerned when I read the book – but then I became excited.

The real exiting part is what happens when the masses… the millions of productive human beings who work their 9 to 5 shift decide to start interacting with the rest of the world without the barriers of physical space limitations?  What if the tool and die maker comes home and does CAD projects off of a site like Mechanical Turk?  Why?  Not for money, the pay isn’t necessarily all that great but instead for the fun of it.

I know that there are some coding problems that are fun for me to solve, even if the reward isn’t that great.  (Don’t believe me?  How many of you know that I have half a dozen products that I sell – but don’t market?)  What happens when we change our culture from one where we “veg out” into a culture where we “turn on” our brains and start doing productive – or semi-productive work?

If I’ve got you the least bit intrigued, pickup the book Wikinomics: How Mass Collaboration Changes Everything and see what I mean.