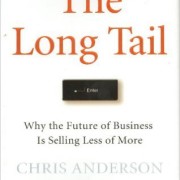 The world is changing.  That’s no news flash.  The real question is how is it changing and what do those changes mean for you?  One of the changes is a gradual migration away from runaway hits, blockbusters, and phenomena.  Instead lower cost to store, lower cost to distribute, and better findability are changing economy so that we can all have the individuality we crave.

A few centuries ago we as humans possessed relatively little.  The tables we owned were crude, the dishes in ornate, and our clothes drab and expressionless when compared to today.  We were in an age of craftsmen.  A craftsmen’s work took time and was therefore expensive.  As a result we couldn’t afford much.

We moved from there to assembly lines and mass production where you could have nicer things – as long as you were willing to have the same nicer things as your neighbor.  As a result of mass production, producers had to find the things that would sell well to a large number of people.  The more people you could convince to buy the product you were making the more money you made.

The problem with mass production is that it required that a few items be produced in large quantities.  We needed to have one kind of car (Ford’s Model T – in any color as long as it’s black).  The costs of producing, inventorying, and distributing variations were too expensive to be cost effective.  The economics of mass variation weren’t cost effective.

However, today we’re living in a different world.  We live in a world of electrons not protons (bits and atoms as the book would describe it.)  Electrons move from one spot to another at lightning speed thus eliminating distribution costs.   Electrons don’t take up nearly as much space as protons … the result is the virtual elimination of storage costs.  Electrons flow through computers in a seemingly infinite number of ways resulting in a lower cost to produce the variation that customers want.

We live in the world of $0.99 music downloads, print-on-demand books, and streaming video.  In short we already experience the ability to purchase bits not protons – or at least the electrons are converted to protons at the last moment.  We don’t buy tapes or CDs as often as we once did.  Instead we purchase the music – and occasionally convert the electrons into protons  when we burn a CD to play in the car.  We order books which exist solely electronically and they are converted into printed form without our even knowing.  Sometimes we don’t even bother to have them converted as we buy eBooks.  Instead of a single one-size-fits-all video from the network affiliate we are increasingly a society that watches our video from the Internet.  We watch 3-5 minute clips of the news stories that we want to watch rather than 30 minute news broadcasts.

The Long Tail explores this idea – the changes that have been happening – and what it means for you and me.  If you’re trying to understand how to make money in an increasingly competitive world, it’s worth a read.