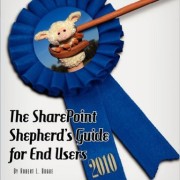 I’ve been honored to receive accolades for the work that I did on the SharePoint Shepherd’s Guide for End Users (2007 Edition) which was written and delivered in 2008. You can take a look at the tracking list – or just look at the Amazon.com listing. The book is 116 tasks that users need to know how to do. The book itself remains a strong seller more than two years after its release. It has outsold almost every other book I’ve written. (The other 17 released books.) I have felt a strong compulsion to ensure that the 2010 version would be better than the 2007 version. That is the reason that I’ve been largely silent on the issue of where the book is or whether I’d be updating the book for SharePoint 2010. However, today I’d like to announce that we’re in the final editing process for the book – this should put the book on the shelves in less than 60 days and means that we can offer corporate licenses immediately.

Let me talk, for a moment about the difference between the 2007 version and the 2010 version. The 2007 version was 377 pages (7.44″x9.68″) and 116 tasks. The 2010 version has over 411 (8.5×11) pages and 175 tasks – and we’re still tweaking the final number as we see things that we missed so it may go up. We’ve not decided on a final trim size for the book –so our page count will definitely increase over this 411 pages. That means we’ve got somewhere between25 and 75% more content. We specifically added tasks around areas where our customers (of both the book and the corporate licenses) told us we were weak. Further, I got one negative comment (ever) about the book not having an index. I’m happy to say that the 2010 edition of the book will have an index. In short, I tried to ensure that we were addressing every comment about the previous version.

In addition, I’m trying to take the same approach to decision making that you’ll find in the Patterns and Practices SharePoint Guidance for describing how decisions can be made between options in SharePoint to the book. So the intent is to provide consumable chunks of content around the decision between creating a list or a library – or choosing to create a choice field versus a lookup. The idea is that these guides will be small enough to be consumed quickly and will be written with the end user (and not the developer or administrator) in mind. This was one of the things that I had hoped we would get to for the 2007 book but we just couldn’t make it happen. In all candor this is the hard stuff to write and it’s the one part of the book that’s not written (thus isn’t in the increase estimates above.)

So why am I announcing the book on my blog? Well, I’m starting to get more specific inquiries about corporate licensing and SharePoint 2010. I felt like it was time to explain where I’m at, what I’m doing, and why it’s taking so long. I don’t expect the explanation above really resolves the final question – but at the very least I expect that you’ll get a glimpse into the fact that I’m putting substantial effort into improving the book.

I’ve kept pricing at the same levels as the 2007 corporate licenses. (Email my sales manager at shepherd@sharepointshepherd.com to get a specific quote) I’m also offering my existing corporate customers a 50% discount on the new materials for the next 60 days. Finally, new customers who order in the next 60 days will receive a 50% discount on the 2007 materials when they order both sets of materials together. The idea of this discount is that organizations can purchase their 2007 needs and 2010 needs at the same time.

We should have the outline and some samples of the content up for review in the next two weeks. In the mean time if you’ve got a short term need please send my sales manager an email and we’ll get you the outline and a few samples.

What is SharePoint?
Scroll to top