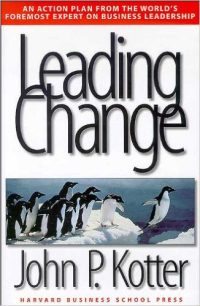 I’ve been working on crystallizing my thoughts on creating adoption and engagement. As a part of that I’ve been looking for frameworks for creating change. One of the models that I was investigating was John Kotter’s 8-step model that’s laid out in his book Leading Change. I decided that it was worth getting the full story so I read the book. The model in summary is:

There are three key things that were important to me in reading the book – in addition to the detailed look at each of the individual bullets so I could fully understand what he meant. First, was that there’s a tendency to skip past the first steps, the preparation, and try to leap directly to the end where they can see the impact of their work. (OK, not to the very end because most folks don’t do the final step to anchor the changes). The problem with this is that it’s the preparation that makes this change work. Skipping right to the end just doesn’t work – unless the problem is small. Despite this I’ve seen folks struggle over and over again to not do the background work necessary to facilitate the change.

Second, there is a difference between management and leadership. It’s not a new idea. However, it struck me that the difference between management and leadership is like I talk about how server adminstrators and developers are different. Server administrators are focused on keeping things running. Developers are focused on improving functionality – which means change and change is not good for keeping things running. Management is about controlling things – orchestrating them to make them work. Leadership is more long term, focused on change, and where the organization should be in the future. Kotter also makes an interesting point that both leadership and management are necessary – and are rarely found in the same individual.

Third, the concept of lifelong learning was essential to leadership. Kotter isn’t the first to have said this. Malcom Gladwell talks about the value of meaningful practice in his book Outliers. One of the statements from Leading Change is “Lifelong learners take risks. Much more than others, these men and women push themselves out of their comfort zones and try new ideas. While most of us become set in our ways, they keep experimenting.” I’d say this is true, however, I’d qualify that most leaders I’ve met don’t classify the things they’re doing as risks in the same way others do. They will say something like “I was just trying new things.” Most folks believe that to be inharently risky but most lifelong learners don’t see it that way. It’s just normal operating procedure.

If you’re struggling with driving change in your organization (like SharePoint Adoption/Engagement) Leading Change is worth a read. It will give you insight into the process.

PrevPreviousI am a Comedian.
NextBook Review-Step by Step to Stand-up ComedyNext