Blog
You are here: Home1 / Blog2 / Professional3 / SharePoint4 / The Making of a SharePoint Shepherd Photo

One of the things I hear from folks from time-to-time is they wonder how we came up with the idea for the cover to The SharePoint Shepherd’s Guide for End Users: 2010. I wanted to explain that – and unwind our latest photo – or Christmas gift of humor to the market. (If you want to get a copy of the full message subscribe to our mailing list and we’ll send you a copy.) 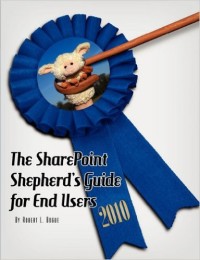 One of the problems that happened when we were creating the 2010 cover was we were trying to find good stock photography featuring sheep. As strange as it is to say, finding good stock photography of sheep is difficult. So we were joking about getting a puppet and using a sheep puppet – like Lamb Chop – to use on the cover. And then we weren’t kidding. It was a way to convey our sense of fun with the SharePoint market. I found a sheep puppet I liked – and named it Lamb Shank – since it was going to have my larger arm in it.

Through the concept development process we decided that it wasn’t the sheep’s guide to SharePoint – it was the Shepherd’s guide. As a result we need to convey the shepherd – but how? Well, enter the Shepherd’s Crook. Of course, Wal-Mart doesn’t sell Shepherd’s Crooks (at least not the Wal-Mart stores near me). That meant a search on the Internet – and I’ll warn you not to do a search for this on your own without the Safe Search filter on. With it in hand we went off to do a photo shoot. You’ll be happy to know it’s my hand in Lamb Shank on the cover of the book with my son supporting the crook.

As we were finalizing the book we decided that Lamb Shank (and the book) were blue ribbon – first class. So we tried to figure out how to convey that. We couldn’t exactly pin a ribbon on such a small lamb. And thus is the story of how the cover was born.

One of my pet peeves was that people started to advertise for Christmas before Thanksgiving. I have already got my inbox full of “Black Friday” and “Cyber Week” deals. The initial concept was that Santa was still on the beach on vacation and that when the advertising started he had to come back. We wanted it to be intentionally fun, corny, and a bit crazy. That’s why we decided to add the blow up palm trees and the blow up pink flamingo. It was sort of my homage to all things corny and overdone. The shot was actually done in my studio. We shot it in front of a white screen and added the image later. The reason for white is because the green screen causes a green halo on the objects being traced when doing photos.

That sort of morphed a bit into Santa being the SharePoint Shepherd. (i.e. it’s me in the Santa suit.) It was really a last minute thing to have Santa capturing the pink flamingo with the shepherd’s crook. The shot was originally planned as Santa with some money – signifying both what we spend on Christmas and the remaining budget that an organization may have in its training budget. However, the crook won out becauase it was funner.

Create Your Own Story

As we’ve got a series of DVDs coming out and of course more marketing campaigns coming out, I’d love to hear what you’re thinking of fun and interesting things that we can do with a sheep puppet, a shepherd’s crook, and a video studio. Coming up with these visual stories is one of the funnest parts of my world.