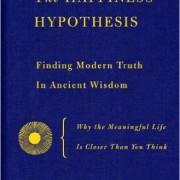 When I was reading Switch I was introduced to the metaphor of the elephant, the rider, and the path for thinking about how to motivate people (including ourselves) but the book referenced The Happiness Hypothesis as the origin of this model. Despite the good coverage of the model in Switch, I wanted to get more details about how the model was formed and some of the concepts that surrounded it.

The Happiness Hypothesis doesn’t disappoint. It reaches across religions and great thinkers, it quotes psychologists, philosophers, and research. It’s an ultimate tour of peoples thoughts. I deeply respect Jonathan Haidt’s considerable effort to seek balanced views. I remember a blog post by Malcolm Gladwell where he was discussing Freakonomics. In his book Tipping Point, Gladwell points to “broken windows” as a theory for why crime fell. Freakonomics proposes that it’s the reduction in unwanted children because of Roe v. Wade (abortion rights). He mentions that he dismisses other ideas in his writing. I’m not saying this is wrong – in fact, The Happiness Hypothesis acknowledges that this is normal human behavior. The fact that Haidt fought so hard to provide a balanced text is important.

There’s one direct quote that I can’t pass up because it’s so perfect:

“The metaphor I use when I lecture on Freud is to think of the mind as a horse and buggy (a Victorian chariot) in which the driver (the ego) struggles frantically to control a hungry, lustful, and disobedient horse (the id) while the driver’s father (the superego) sits in the back seat lecturing the driver on what he is doing wrong.”

I just love that word picture.

There is some good coverage of Buddhist philosophies about detachment and their evolution as well as their usefulness. Ultimately, walking through the consumption and the externalization of a person’s identity into the things that surround them and how this isn’t good – even though it’s less risky now than in the past because we’re relatively speaking more secure in our possessions than any other time in history. Haidt explorers the positive effects of meditation and highlights the benefits of cognitive therapy.

I particularly liked the closing which ties things together by talking about “vital engagement” – which is flow plus meaning.

If you’re interested in a “once around the block” for the religions and great thinkers of the world as to what makes people happy, you should reach for The Happiness Hypothesis.