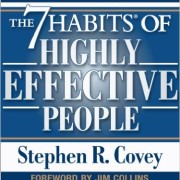 Steven Covey’s book The Seven Habits of Highly Effective People is a classic. I probably read it 20 years ago when I was first entering the workforce and the book was the latest rage. I can probably count on one hand the number of books I’ve read more than once on one hand – actually I can’t recall any other book that I’ve read more than once. However, when Amazon.com featured the book for $0.99 on Kindle I thought it was time for a reread.

The 7 Habits, for a quick reminder are:

These correspond to three “levels” – Independence, Interdependence, and Self-Renewal.

The Seven Habits is different than other books in the sense that it focuses on principles rather than techniques. While the connection is never made to Dale Garnegie’s How to Win Friends and Influence People the difference between the approaches is striking. Where one is teaching you the psychology of how people work – something I deeply enjoy as evidenced by my DVD – the Seven Habits talks about how to develop an inner strength of character. I believe both are needed as I’ve found people who are very character rich who still struggle with how to work with people, how to communicate their concern for others on a daily basis. One of the premises is that principle centered growth leads to more happiness than techniques for connecting with other humans. This is consistent with The Time Paradox and The Happiness Hypothesis. Both of these books speak of the way that character and purpose are more rewarding than the hedonistic pursuit of pleasure.

Much of reading the book was like watching an old home movie of me. Somehow I remember being there but I was seeing things from a new perspective, from a new lens. I was stirred by different words. I caught the difference between principles – natural laws and values – beliefs. I pride myself in having friends with different beliefs. While I personally have a deep faith in God, I have friends who have no such belief. I can have great conversations with them exploring because I know that my perspective on the situation isn’t the only one.

Having been a consultant for most of the last 20 years of my professional career, I consider the information in The Seven Habits foundational for every good consultant. As Covey admits in the book his struggles to always live the seven habits, I too must say that I’m not always on track with the seven habits. I can, however, say that in many cases I know when I get off track with them. It generally means I get a healthy dose of retraining as to why they’re important in the first place.

Even if you’ve read the book before, it’s worth reading again.