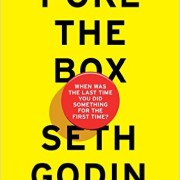 Lately I’ve been getting a distinct message that I need to just do. I just had to get some things out there for the market to test. No small part of that message is from Seth Godin’s Poke the Box. Godin makes a compelling argument that we sometimes fail to start because we fear to fail. We don’t want to put that first, tentative foot into the water for fear that the market might not like it. There are the cliché references to Thomas Edison and the light bulb and the same reminder that most folks don’t know how many time Edison failed to create the light bulb – they only know that he did. His success virtually erased his failures.

However, beyond the same prompting for action that you might find elsewhere, there’s an awareness of pressures that cause initiative. Having been a consultant almost my entire professional career the idea of a project based organization creating the drive for the next thing is familiar. It’s downright eerie when you consider the name of my organization is Thor Projects.

Perhaps another insight is a restatement of Scott McCloud’s argument in Understanding Comics. That is: Life isn’t what’s drawn in the frames, it’s what’s in between the frames that counts. It’s the space that’s left up to you – and you alone – to fill in the blanks.

As a final thought, there’s a discussion about the delicate balance between initiating – getting started – and the need to get finished. In my head I went back to a large snow when I was a child. I can remember designing a snow fort. Or rather I can remember a series of iterations for gathering and piling up snow to create a snow fort. What I realized even then was that I spent so much time changing my approach for gathering snow that I never really finished trying one. I kept changing my approach until I had gathered all the snow. It’s this story that reminds me that sometimes it doesn’t help to keep changing and doing new things.

Poke the Box is an easy read and worth it if you’re trying to help motivate yourself to get started.