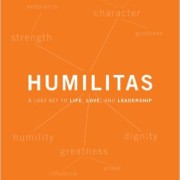 If you’ve been reading my blog – or even just the book reviews for a while you may have realized that I’m on a voyage of self-discovery – and it’s a voyage that isn’t even close to its end. I’m constantly trying to improve my understanding of psychology, sociology, and leadership – among other skills. My backlog of reading on these (and other topics) can feel overwhelming to me at times. I bring this up because I can already hear some of the potential comments about reading the book Humilitas – “So now that you’ve read the book you probably know everything there is to know about humility.” Um, no. The truth is that this the third book that I’ve read about humility. The other two, Humility and Humility: True Greatness, didn’t speak to me greatly enough to write a full book review on them. Not that they’re not good books – they just didn’t speak to me clearly.

I read these books because I realize that a lack of humility has been a barrier in my life. It’s like the pervasive smell that is in your clothes, in your hair, and in your world after going to a bon fire. Every time you believe you’ve rooted out the smell there’s another whiff of it. Humilitas ends with a quote from CS Lewis, ”    If anyone would like to acquire humility, I can, I think, tell him the first step. The first step is to realize that one is proud. And a biggish step, too. At least, nothing whatever can be done before it. If you think you are not conceited, it means you are very conceited indeed.” In short, the moment you believe you’ve obtained humility, you haven’t.

I remember years ago I was playing a game Ultima IV: Quest of the Avatar the goal of which was to accumulate eight virtues (honesty, compassion, valor, justice, honor, sacrifice, spirituality, and humility). I was asked a question in one of the dialogs. “Are thou the most humble person on the planet?” (My apologies if the quote isn’t exact.) I can remember pausing and thinking that this was an awful question (which means it was brilliant). I had already earned the humility portion of the avatar, so I was humble. Being at the time 13 years old or so I answered yes. The game responded with “Thou has lost an eighth” a few times because I lost humility and honesty, which in turn caused me to use several of the other eighths that required the ‘truth’. It was profound because I had been working quite hard to complete the game and in one moment I had lost half of the progress (four eighths). For all the evils that people find in roll playing games – this was a very memorable moment for me about humility (and still not enough to teach it to me.)

Since then I’ve been accused of arrogance more than once by a variety of people – and I’ll accept that it’s a struggle particularly when someone challenges what I know. (Strangely enough, this happens more frequently than one would expect.) That’s why I was surprised to see the book very early on say that contemporary western culture often confuses conviction with arrogance. While by no means an excuse for the lack of caring in my responses at times, it softened the blow for me. If I know that the technology is configured wrong, it won’t work or it won’t work right, it may not be arrogance to share this belief – in a caring way.

One of the really difficult things for me has been trying to rapidly establish my credentials in front of new audiences and clients. Conventional wisdom says that you have to introduce yourself to a client with your certifications, achievements, and accolades in an environment where you’re selling. At a corporate level, look at how nearly every technology company has their “brand name clients” slide that lists who they’ve worked with. On a personal level nearly every conference I’ve spoken at suggests or requires a bio slide. It’s the “about the speaker” slide that is supposed to help the attendees realize why the speaker is someone to listen to – and by extension why the conference organizers did their job correctly by selecting such great speakers to speak to you.

In a lot of ways, I’m a slow learner. It’s been relatively recently – and at the specific suggestion of some friends (thank you) – that I’ve stopped doing the “about me” slide. I sometimes have a slide that shares my background – but it does so for the purposes of establishing how I think about the topic – not for the purposes of sharing my credentials. My audiences deserve to know where I’m coming from – but they don’t need to know about my certifications.

I’ve been “taught” this in many different ways. Back at the NSA Conference (click for my experiences) I attended a session by Connie Podesta where she said something simple and profound “the privilege of the platform.” Her talk was about how she made her business work. She was talking about her openness to learning, and how she was grateful for the privilege of speaking to another group of people. She never used the word humility – that I can remember – but she did demonstrate it.

Humilitas is the root of our word humble and the one word with two meanings “to be humiliated” and “to be humble”. The book makes a point that being humble is not self-effacing. It’s not a solitary virtue. It’s not something that forced on you. Humility is others-serving and a choice. Humility is more than modesty or dignified restraint (modesta is its root word.)

I find it somewhat humorous that John Dickson spends so many words iterating and reiterating that his perspective – that Jesus the Nazarene dramatically changed the course of human events without asserting Christian beliefs. As a student of history he asserts that the change happened whether Jesus was the Christ, a profit, or “just” a carpenter. It’s humorous to me because without any belief there is historical evidence to indicate the impact of Jesus.

It seems like nearly everyone struggles with humility. Thomas Gilovich did a study of 1 million (million!) high school seniors and 70 percent thought they were “above average in leadership ability.” I don’t know these students but I do know that at least 20% of them are wrong. It’s not just students who struggle with humility. Gilovich found that 94 percent of college professors believe they are doing a “better-than-average job”. Hmm, again at least 44% of these processors have to be wrong – statistically speaking.

Dickson makes the point that humility is a useful virtue. That it serves not only the community at large – because humility is defined as using power to help others – but also helps the individual. Humble individuals know that they don’t know everything and so they’re always trying to learn from others, to understand someone else’s expertise.

Sometimes while presenting I have students in the classroom that want to demonstrate their knowledge by the questions that they ask. They ask about some specific situation that they already know the answer to. When I can’t answer their question they provide their own answer. The humble person doesn’t sit quietly and shy away from asking questions, rather they ask questions from the perspective of applying the talk to their situation – and to integrating the presentation into their way of thinking.

One last random thought, which comes by way of Amanda Gore. I was sent a link to one of her YouTube videos by a colleague. She was talking about a concept in Australia called tall poppies. Basically it’s a negative way of talking about those who have high merit. This is connected in that if you hold your head up high – deserved or not – you may have someone come try to cut your head off. Not that you shouldn’t own what you know but just that humility may be the right answer at times.

I invite you to join me on this journey by reading Humilitas.

Performance and Scalability in Today’s Age – Horizontal vs. Vertical Sc...