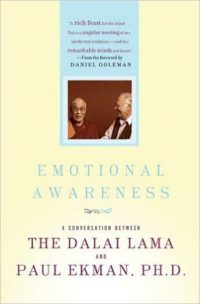 Paul Ekman’s CV spans 14 books and he’s well recognized as the authority on how emotions are shown in a person’s face. When I was writing my review of Emotional Intelligence , I saw this book and realized I had to read it.

A Different Kind of Religion

I’ll expose that I have a great deal of ignorance when it comes to Buddhism. However, one of the things that struck me in Emotional Awareness was the Buddist concept that “If our findings – through investigations, through experimentation – contradict Buddhist ideas, then we have the liberty to reject the old ideas. That is the Buddha’s own words.” Having been raised in Christianity and with good Jewish friends, I am used to the belief that the Bible is the inerrant word of God. Muslims believe that the Qur’an is the unaltered and final revelation of God. In that context, a religion that is based on the continual refinement of understanding is quite different.

The conversations between the Dalai Lama and scientists aren’t a new thing. As mentioned, I heard Destructive Emotions some time ago. The curiosity, openness, and desire to learn in Buddhism are things I find that most branches of Christianity struggle with. Perhaps Christianity’s desire to insist that all we needed to know was written in the Bible is why we struggle with our emotions today.

Clearly we think. We’re constantly processing a stream of information that’s bombarding us (See The Information Diet). However, the question becomes how can we determine what’s a thought and what’s an emotion. A great deal of the book is spent talking about how to differentiate between a thought and an emotion – and how emotions form. Ekman draws our attention to the fact that most emotions have a signal. They let others know what’s happening inside us. Emotions are also not swayed much by our consciousness – at least not initially. Moods are a persistent attitude that the person may not be aware of – in fact, a person may not even be aware of what caused the mood.

As discussed in Thinking: Fast, and Slow, sometimes we aren’t aware of the tricks that our mind pays on itself. This concept is revisited here from the perspective that emotions can block information which would contradict the emotion being felt. During the “refractory period”, we literally cannot take in information which contradicts the emotion. If you’ve ever been speaking with someone who is telling you that they feel unimportant and uncared for – and wanted to smack them because they are important and you are listening and caring for them at the very moment that they’re complaining about it – you know what I mean. There are times that you simply cannot see the trees (what people are doing) for the forest (how you feel.)

The Afflictive Nature of Emotions

Buddhist thinking includes the idea that emotions are either afflictive – negative or bad – or non-afflictive. However, in the conversation between Dr. Ekman and the Dalai Lama, they talk about how emotions are also afflictive or non-afflictive based on their appropriateness for the situation and how they are used. I’ve mentioned in my review of Emotional Intelligence that the one thing that I know I got out of Destructive Emotions was the concept that anger is disappointment directed. Anger is technically categorized as an afflictive emotion. For instance, Anger might be afflictive if you’re disappointed because of unrealistic expectations but non-afflictive if you’re angry at the plight of abused children.

When someone does something truly evil, anger is an appropriate emotion. If you didn’t feel some anger at an injustice it would be difficult to have the energy to do what is necessary to prevent the injustice from happening again. To feel nothing when others are suffering is its own problem.

From my own point of view, emotions are energy. In fact, when I talk about the Rider-Elephant-Path model from The Happiness Hypothesis (and Switch), I talk about the emotional elephant being the powerhouse that gets things done. Emotions drive us. The dimension for measuring the impact of an emotion is what you do with it. If you use a competitive nature with your dad to drive you to excellence in all you do – then it can be a good thing. (This is Dr. Ekman’s story.)

Bonds that Make Us Free, Leadership and Self Deception, and Anatomy of Peace talked about “boxes” that we get in and how those boxes distort our view of reality. Conceptually we’ve all got ways that our perception doesn’t match reality. Beyond Boundaries talks about the distortions of reality that we create to sustain ourselves in unhealthy relationships – and how determining what those distortions are is pretty difficult. It’s not a matter of whether or not we have distorted views. It’s a matter of how many we have, and how much they impact the way that we interact with reality.

One of the touching vignettes in the book is the scenario of Dr. Ekman’s daughter asking the Dalai Lama why it is that the people we love are the ones that hurt us the most. His answer “Because you are not seeing them realistically. Focus on their clay feet. If you will accept their imperfections, then you will not be so disappointed and angry.” In this answer is an awareness of our distorted view of the world – and our desire for those we love to be perfect. However, that’s not realistic for anyone.

One of the distorted views that we all have is of our own self-importance. Humilitas spent a great deal of time on this topic – including talking about what percentage of people felt that they were above average at leadership (70%). Just as Humilitas shifted my view of what pride was, so too did Emotional Awareness. The Buddhist idea of pride as an afflictive emotion is really “deluded pride.” That is to say it’s OK to be proud of what you’ve accomplished – but not to the point where it makes you think too highly of yourself. It’s not pride itself that is the issue, it’s the delusion – or distortion of it – that is the problem.

Consider for a moment, a positive form of pride discussed, that is the pride that you feel when someone else, such as a student, is successful. This is a healthy pride that is non-afflictive (non-damaging) – honestly, it’s a great feeling. It’s the same feeling that some parents feel to see their children succeed. I use caution here because some parents project themselves into their children’s place, thus increasing their own self-pride.

Embedded in this discussion is the concept of attachment. Buddhists are taught that attachment is an afflictive emotion. However, it’s more about the degree to which someone is attached. Attachment in the Buddhist sense is about over-possessiveness or control. Attachment is the basis for compassion – something deeply valued. It’s appropriate to have a level of attachment to your family or even your things. When you’re attached to your things that is good – when you’re attached to other peoples things you’re experiencing covetousness.

Much of emotional awareness is about monitoring the game that’s happening inside of people. Dr. Ekman spent years studying the face so that he could see the emotions that people were experiencing, only to realize that you can become aware of someone’s emotion but not why the emotion is there. B. F. Skinner and the behaviorist psychologists would be disappointed that we’re focusing so much energy on trying to understand and define things which cannot be directly measured. It’s so much easier to measure what someone did – or didn’t do. It’s also much more difficult to figure out why they did – or didn’t do – something. It’s too difficult to separate one set of motivations from another.

However, there’s a certain component of how we respond to our emotions that are influenced by our motivations. It’s based on the person that we want to be. If I simply tell you that I shot someone dead you have no way of making an accurate interpretation of the behavior. If I committed one of the all too common tragedies shooting innocent victims that’s one thing. If I premeditated and then killed a “rival” that’s another. If I killed myself in defense that’s still another. Finally, if I killed to protect someone else that’s another thing. So the motivation of the behavior – which is impossible to verify – is sometimes more important than the behavior itself.

As you might expect from a book with the Dalai Lama, compassion is a big theme. There are conversations about how compassion is neither an emotion nor a mood. Ekman speaks of his fourstep model for compassion:

Dr. Ekman quotes Kristin Monroe about how people who are altruistic have a tendency to not see any other options. That is that they say they “had” to save the child from the burning building or that they “must” help others.

Suggestions for Working with Others

The distinction between the act and the actor, between the problem and the person, is essential to being able to forgive and free yourself from burden. It’s all too easy to get wrapped up into demonizing a person for the things that they’ve done that we don’t like. However, this demonizing is at the heart of every great holocaust. In order to commit such unspeakable acts it was necessary to make the people be non-people in their mind. The more we confuse the act with the actor the more difficult we make the process of forgiveness and the more difficult it is to work with other people.

So separating the act and the actor to facilitate forgiveness is the first suggestion for working with others. The second recommendation, meditation, is more paradoxical. In a sense, we’re saying don’t work with people to learn to work with people – however, there is a purpose. Meditation allows you to become more aware of who you are and your emotions. You learn to recognize your emotions more clearly and more quickly. You also learn how to quiet them more quickly. Through meditation, you can become adept at reducing distortions in conversations because you can collapse the refractory period after an emotion has occurred.

I found the book to be a wonderful journey between a great scientist who has spent his life trying to categorize and define emotion – to define its roots – and a spiritual leader who is concerned with enlightenment. There is so much for me to learn from a spiritual leader like the Dalai Lama and so much to learn from the great research that Dr. Ekman has done. If you’re interested in learning more about how you can improve your Emotional Awareness – you’ll probably find the book interesting – I know I did.

PrevPreviousBook Review-The Me I Want to Be
NextBook Review-Compelled to Control: Recovering Intimacy in Broken RelationshipsNext