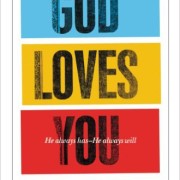 Back in February I ended my marriage of over 15 years. There were good times in the marriage but there were also times which were an absolute struggle. They were consuming me – pushing me to become better but also making me weary in the process. Through the process of the divorce I was forced to redefine who I am. I had a defining boundary that I wouldn’t get divorced. (See Beyond Boundaries for what a defining boundary is.) Despite the boundary, after five years of fighting, I ran out of strength to continue the fight.

I was angry. I was angry at my ex-wife as you might expect, but I was also angry at God. I was angry because I thought that if I were willing to work on the relationship and pray hard enough that he should make it alright. I wondered what was wrong that God didn’t love me. I thought that there must be a reason why what was happening to me seemed to contradict what the Bible said. It didn’t make sense.

My search for believing that God did love me and there was a greater plan led me to David Jeremiah‘s book God Loves You: He Always Has and He Always Will. Unlike some of my other book reviews which are quite intellectually driven, there weren’t many notes for this book. I already knew that God loved me in an intellectual sense, however, I didn’t believe it emotionally and that’s where the book really helped. Somehow through the pages, between the paragraphs and under the words I found the belief that God really did love me – personally.

One of the things that was woven into the book was that we were made for something better – something better than fear and doubt. We were made to be a light showing love and compassion to the world. One of the things that I didn’t realize when I was reading these words was that God wanted to bless the faithful in their greatest needs. For me, I was to be in a wholly intimate relationship with another person. A relationship that simply wasn’t possible with my ex-wife. I’ve been blessed to have a relationship in my life which is intimate and supportive. It’s a relationship that I’ve never seen modeled and I don’t understand. I trust that it’s a gift from God. So while I’m deeply saddened that it’s something that my ex-wife won’t be able to experience, I’m quite grateful that God saw fit to bless me with it.

One of the other things that I picked up elsewhere but ties in is that God takes everyone he loves through the wilderness – through the desert. Every story in the Bible seems to have someone going through a struggle to get them someplace that was better than where they started. My struggle to honor my commitment and keep my marriage going was a struggle that was my wilderness. It was filled with exploring. Exploring who I was, what I believed and how the world worked.

Jeremiah speaks about what we’re meant to have. We’ve all heard about covetousness. Most of us believe that coveting is simply wanting something that someone else has. However, as Jeremiah points out, it is a much stronger statement than that. Coveting is literally to deprive someone else of their property. Jeremiah describes it as a kind of lust in longing for something that we aren’t meant to have – or aren’t meant to have now. Sometimes when we ask God for something and we don’t get it – it means that we’re not supposed to have it. Consider that even Paul had a thorn in the flesh that God wouldn’t take away. This wasn’t because of the sin of pride – but rather than to keep him from becoming proud.

Jeremiah also speaks of the fact that God, like a good parent, is willing to administer discipline to teach a child. The willingness to administer pain to prevent a greater harm is the mark of true love. He speaks about the fact that God loves because that is his essence. I can’t quite put into words how reading a book about something I already “knew” allowed me to feel more at peace with it – but it did.