Book Review-Dialogue: The Art of Thinking Together – Dialogue Together

Home Book Review Professional Book Review-Dialogue: The Art of Thinking Together – Dialogue Together 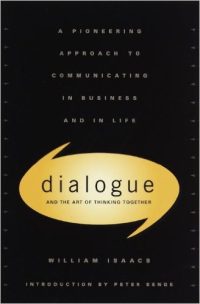 Book Review-Dialogue: The Art of Thinking Together – Dialogue Together

I’ve written about Dialogue before. I initially summarized my thoughts from The Fifth Discipline and Dialogue Mapping in a post called Discussion and Dialogue for Learning. More recently I posted about one aspect of Dialogue in my post on Defensive Routines and a second aspect in The Inner Game of Dialogue If you’ve missed it, I’d suggest you start with that post because it is really the other half of this post which got to be way too long.

Dialogue is much about creating the right environment through preparation of ourselves and creating a place where people can feel safe to express their reality.

If you have heat, oxygen, and fuel you may have a fire but you may not. It depends upon the ratios of the ingredients and whether there’s a spark to kick off the process. Such is the case with dialogue. Just because you have all of the components that lead to dialogue doesn’t create one. Inherent in dialogue is a spark. It’s a spark that ignites the process and makes everyone want to become a part of something more, something greater than themselves. So while you can learn the components and you can identify the players you can’t force it to happen. Dialogue can only happen when the conditions are right and the timing is right. Simple things like trust while not a specific component of the model are a catalyst for the model. Trust drives safety and safety (or the perception of safety) is an important prerequisite to dialogue.

Dialogue calls out four pathologies of thought – four things that lead us down paths which move us further away from Dialogue. They are:

Kantor cautioned about systems where two opposite ways of acting are required inside the same system since humans are particularly bad at learning when they must do something that at the other end of the spectrum they cannot do. Kantor called these structural traps.

We create structural traps when we call for dialogue in one conversation and shut people down for speaking the truth in the next meeting. The greater the different required in the behavior, the more space and the more safety that are required.

This process is both natural and dangerous. The problem is that we will infer things about people which aren’t true. Unfortunately we don’t store the inferences as inferences, we store them in our brains as facts. This causes for us the problem of unconsciously applying disrespectful judgments to people that we don’t necessarily intend.

When encouraging dialogue we must be mindful of the ladder of inference we’re placing above people comments – and specifically test them or dispel them as soon as possible. If we believe that someone is a bum, we might ask what they’ve just been doing. We may find out they’ve been working hard to build some landscaping and haven’t yet had a chance to clean up.

My favorite story here is one where a man was riding home on the subway and there were a set of unruly kids disturbing nearly everyone on the subway. The man finally, in disgust, speaks to the father of the children who had been to this point oblivious to what the kids were doing. The father of the children responds that he’s sorry that they had just left their mom’s funeral and he didn’t know what he was going to do or notice the kid’s behavior. Our ladder of inference quickly jumped that the father was a bad father because his kids are unruly instead of questioning what the factors that led to the behavior were.

Have you ever been in a conversation and you felt like the parties were talking past each other? Each saying that the other was completely missing the point? One person is wondering out loud how everyone would feel after the decision was announced? Another person wonders what it will mean to everyone when the decision is announced. The third person talks about getting the decision done and what are we waiting on.

Kantor spoke of three different languages being feeling, meaning, and power. Two people speaking in the same language will understand each other well and speak effectively, but this isn’t necessarily the case when people aren’t speaking the same language.

The language of feeling is all about the emotional impact that will occur as the result of the decision. Myers-Briggs speaks about folks being more feeling focused or thinking focused. (T(hinking) or F(eeling)). People who are more feeling focused are more likely to communicate in the language of feeling. This includes their feelings about the decision and the feelings of others. These folks demonstrate a high degree of emotional intelligence.

The language of meaning is all about how people will think about the decision. Back to Myers-Briggs these would be those with a high thinking perspective. They’re concerned about the long term impact of a short term decision and are focused on the downstream ripple effects.

Finally, the language of power is focused on getting things done. They’re tired of the analysis paralysis and just want to move forward believing that any action is better than no action.

When someone is in one language – even if they know how to speak multiple languages – they may not be able to hear someone speaking in a different language.

One of the interesting things in having read a few books over the years is how often the ideas that we’re looking at come back from a few individuals. Kurt Lewin is often quoted about his perspectives on people and behavior. This makes sense given his psychologist. However, one of the other commonly referenced visionaries is David Bohm. David was a physicist. He was gifted in his ability to see the natural order and flow of things. He was particularly effective at his expansion of the concepts of what dialogue is. However, this isn’t the extent of his vision. There’s another expanse that Dialogue surfaces. That is, he describes that trees do not come from seeds – that would be silly that a big tree came from such a tiny seed. Instead he encourages us to see a seed as an aperture through which the tree emerges. This is a great way of seeing things connected to the whole. He describes the process of nature unfolding and folding on itself.

Nature combines elements to unfold into a tree. When the tree’s life is done those same elements fold back in to the rest of nature ready to recombine and become another tree or something different entirely. In this way we see that we’re all connected to one another. We’re all a part of the same stuff of nature. We’re not apart from nature, were a part of the nature of all things.

We’re All The Same

The more that I speak with people the more I realize that we all have the same fears and hopes and dreams. I don’t mean that in a precise sense. I don’t have the fear that my daughter has about being liked or fitting in at college but I do want to be a part of the “cool club” at the conferences I attend. I know that others want to receive the Microsoft MVP award to be in the group that I’m in.

In 2013 the SharePoint market convulsed at the announcements made at the Microsoft SharePoint Conference in 2012. The message was that on premises deployments were going to be no more and all hail the cloud. That messaging didn’t sit well with customers and as a result many clients focused their energies outside of SharePoint hoping that the dust would settle. The result in the consulting market was that many organizations eliminated or scaled back their SharePoint practices.

The SharePoint developers started working on .NET projects. The infrastructure consultants went on to work on Azure, migrating users to Office 365, or some other product. Estimates on the change for consulting organizations ranges from 25% to 75% of their business was gone. Consultants that I talk to are scared. If they’re working for themselves they’re struggling to find clients. If they work for an organization they’re not hitting their utilization numbers and they know that this means they are at risk of losing their job. I was speaking with a colleague inside of an organization and she mentioned that she’s concerned about layoffs at her organization. It seems everyone is concerned about where they’re going to continue to be able to make money to feed their families.

At the heart of the book Dialogue – The Art of Thinking Together is the awareness that we are all the same. We’re all human. We have – when viewed broadly – the same desires, concerns and fears. In Emotional Awareness I heard the Dalai Lama speak of compassion for all living things. For cultivating this compassion that connects us to everyone else. Sometimes we slip into a narrow minded view that we have to protect ourselves and what we have. We begin to think win-lose that in order to win someone else must lose. We stop thinking in terms of the Nash equilibrium and instead move to von Neumann-Morgenstern. (See The Science of Trust for Nash and von Neumann-Morgenstern equilibriums.)

Perhaps if we are able to cultivate our compassion for all people and our understanding that we’re all fundamentally the same we’ll be able to finally Dialogue instead of discuss.

Don’t Just Talk About It, Read About It

If you’re interested in how to create more knowledge, more dialogue and better interactions, it might be time to stop talking about it and read about it in Dialogue: The Art of Thinking Together.