Book Review-Multipliers: How the Best Leaders Make Everyone Smarter 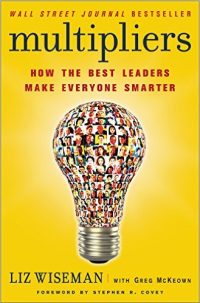 Book Review-Multipliers: How the Best Leaders Make Everyone Smarter

As a consultant for the better part of my career, I have had the opportunity to move between organizations fairly fluidly. I’ll be working with a manager for a few months or a few years and then move to the next project at the next organization. One of the things that has always fascinated me was the different levels of productivity that exist between different teams in different organizations. Some organizations can’t seem to get anything done and other organizations seem to fluidly manage an avalanche of projects and conflicting priorities. Some of how the best leaders I’ve worked with manage to get more out of people than the people believed they were capable of. That’s what the book Multipliers is all about. It’s about the people who are able to extract more from the people they have and make them successful – as opposed to those who crush the souls of those who work for them. I’ve seen both.

Multipliers says that there are five disciplines in which multipliers differentiate themselves from diminishers. They are:

I mentioned in my review of Changes that Heal that a friend of mine had said that I never fail – and after I finished laughing I explained that I fail all the time. The problem is that it isn’t just something that has accidentally happened to me. It’s not like it was a once in a while thing. It’s happening all the time. I recently did a set of interviews with development startups. These were people that were “making it” in their businesses. They aren’t the blockbuster successes that they may be in the future – but they have some measure of success.

However, as I learned more about them I realized that they all had multiple failures in what they were doing. Some started as a product company slipped into doing consulting to pay the bills and started moving back to products – only to fail again at developing a product. Eventually they would get to a point where they didn’t fail with their products, they just broke even. However, the next attempt was more successful – most of the time.

A.G. Lafley, the former CEO of Proctor and Gamble said, “You want your people to fail early, fast, and cheap – and then learn from it.” The expectation is that you’ll fail. Not that it will happen sometimes but that it’s an expected outcome – an expected outcome of trying. This is something that multipliers inherently know. They know that the only way to become a failure is not to try. However, as Lafley said, you have to learn from it. Bill Campbell, the former CEO of Intuit said it directly “You have to be smart enough to learn.”

It’s not enough to fail. It’s not enough to find a thousand ways to not make a light bulb. You have to learn about what you’re doing wrong to change the results. Edison was famously said to realize that air was leaching out of the materials and so his first success occurred because he created a vacuum in the bulb – waited several minutes and then activated the vacuum pump again to remove the air that leached out and he had success. That’s learning what wasn’t working and figuring out what to do about it.

K.R. Sridar the CEO of Bloom Energy said that you have to “separate the experiment from the outcome.” He has zero tolerance for those who don’t try to learn – but grace to accept the experimental failures that are bound to occur.

The first type of multiplier that the book covered is the talent magnet. They’re described as having four key characteristics:

Talent magnets also have little tolerance for prima donnas. We all have egos. However, our egos often get in our way. How to Be an Adult in Relationships talks about how the ego can become too big. The Happiness Hypothesis has my favorite metaphor for the way we think that centers on the Freudian view of the ego, id, and superego. I spoke about the need for an appropriately sized ego in my post for The Wisdom of Not Invented Here. While egos are essential, sometimes it’s necessary to get them under control – or get the person who holds the ego out of the organization. This reminds me of the concept of tall poppies which I discussed in my review of Humilitas. People whose egos cause them to raise their heads too high may need to be cut off.

One trick to leading people is trying to figure out where to put the rails. Rails guide employees. They tell them what is in and out of bounds. For instance, you may be able to authorize a $500 expense but not a $50,000 expense. That’s a rail – a guideline. However, equally challenging is communicating to employees what are rails and what things are just your “off the cuff” thoughts at the moment. As an employer there are some things that I absolutely want done the way that I want them done. There are also things that I don’t care how they get done as long as they do get done.

Multipliers calls this hard and soft opinions. Hard opinions are ones that are well formed and ones that employees are expected to abide by. Soft opinions are the “off the cuff” thoughts that employees can use as a starting point – but that they shouldn’t be compelled to follow. I’ve personally erred on both sides of this equation. Sometimes when I haven’t thought about something well I’ll make a comment and fail to identify it as just a soft opinion. It’s treated as the way things needed to be done. Conversely I sometimes fail to set out the hard opinions to keep folks reigned in. I’ve been known to have projects go “off the rails” because I’ve not communicated well what the rails are.

The second kind of multiplier that is discussed is the liberator. These are multipliers whose magic is created in their ability to create space for employees to be their best. There are three key ways that they create this space:

There are techniques that liberators use to accomplish their goals.

In How Children Succeed there is a conversation about how children need to be challenged to be able to grow properly. Children aren’t the only ones who need challenges to grow. Challengers know how to create an intellectual curiosity that causes people to challenge themselves. Like in Mihaly Csikszentmihalyi explains in Finding Flow, when people have the right balance of capabilities and challenge they do their best work. Challengers create situations by asking questions, putting people in challenging situations, and by taking big steps.

Sometimes we believe that debate isn’t a positive experience. However, Hubert Humphrey, our Vice President under Lyndon Johnson said, “Freedom is hammered out on the anvil of discussion, dissent, and debate.” Alfred Sloan, the former CEO of General Motors said, “Gentlemen, I take it we are all in complete agreement on the decision here.… Then I propose we postpone further discussion of this matter until our next meeting to give ourselves time to develop disagreement and perhaps gain some understanding of what the decision is all about.” (The quote is from Mindset.) In other words, we need debate. Without debate we’re no better than the smartest one among us (or the person in charge.) Debate makers do three key things to make the debate:

Investors build in the people that follow them. They create opportunities for them to grow. Here are four key things that investors do:

Multipliers ends with three recommendations for what to do:

That’s a great way to end – are you willing to become a better leader by working on one weakness for 30 days? Maybe you should pick up Multipliers and see how it can be done.