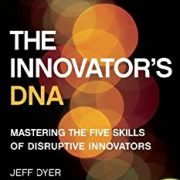 Five Behaviors of the Innovator

There are five key behaviors of the innovator:

You don’t have to be good at all of them to be an innovator – however, you should be strong in at least two and excel at four of the five behaviors – in other words it’s relatively easy to compensate for one innovation behavior difference – but hard to compensate for multiple gaps.

I find the list interesting because I write my book reviews and blog posts around the idea of associating concepts that I see as related though others may not. I often ask questions that were raised in my readings that didn’t come from the book itself but instead came from the ideas that arose in my head as I was reading.

I love people watching. I’ve hinted at it repeatedly in my blog. I love watching things work. I used to love watching John Ratzenberger’s Made in America TV show. It just showed how things were made but it was interesting to me.

Experimenting has always been fun for me as well. I have a solar powered mini-barn. I’ve created a dual-door doggie airlock to reduce heat loss and still have a way for the dogs to get in and out of my office. I created a sled for the top of a RC car so I could take videos of bands marching.

The final behavior is a place where I think I could improve. My LinkedIn profile has nearly 1,800 connections at the time of this writing. So I know people – but I won’t say that I network with them the way that I should to share ideas and grow.

Skills of the Executive

So if there are five skills of the innovator, how do those skills align with the skills of most executives in large organizations? The answer is not well. Executives have gained their position through their ability to execute on the existing was of doing things. In fact, the Innovator’s DNA says that there are four skills that executives are good at:

You may notice that these are not at all the skills that are necessary for innovation. Larger organizations value and reward the skills of delivery – the skills of execution.

Innovation is the Enemy of Operational Efficiency

One of the problems in large organizations is that they’re necessarily focused on operational efficiency. They’re focused on doing the same thing with fewer errors and greater efficiency. The idea is that profit is maximized when you reduce the waste and refine more efficient ways of doing things. This is the heart of lean manufacturing. You remove anything that doesn’t contribute to the consumer’s perception of the result.

As a result organizations often shun the innovative ideas that may be what they need to make radical leaps forward because they’re so focused on making the incremental improvements in their processes.

Innovators simply see everything as slightly broken – or able to be improved upon. Thus one of the key factors for being an innovator is seeing how to make things better.

Michael Dell took apart his computer to see the components and learn how they work. Innovators build models for how systems work (See The Fifth Discipline and Thinking in Systems). Knowing how things work allows them to build mental models and simulate ideas — as Gary Klein discovered with fire commanders and documented in Sources of Power.

It’s these mental models that allow innovators to see if the current status quo is – or isn’t broken. They can test alternatives to see if there are better answers. Much like Einstein is thought to have developed his theories – by running thought experiments in his head.

We know from The Adult Learner that we integrate our learning through our prior experiences and our self-concept. From The Art of Explanation we learned that we build mental models that allow us to communicate and assimilate information. Sources of Power talked about how we build our mental models transparently. We don’t always build them consciously. We just build our knowledge over time.

In The Innovator’s DNA we learn that we synthesize novel inputs by making associations. Innovators are trying to build their mental models of things – and bridge the mental models that they have in different areas together. Innovators are seeking to find a model that explains the inputs that they’re getting. This often causes them to connect ideas from different experiences together so that they form a tapestry of understanding – a tapestry that perhaps they’re the only person who can see in the beginning.

There’s another option for handling novel inputs – that is to discard it. Darwin used to keep a journal of disconfirming data so that his ego defenses couldn’t kick in and get him to discard the information that didn’t match his belief systems. Innovators either use techniques like Darwin to protect this precious disconfirming information – or they naturally gravitate to curiosity towards novel inputs.

One of the quotes from Theory U and Leading from the Emerging Future both by Otto Scharmer is something said to Peter Singe (who wrote The Fifth Discipline) by master Nan “There is only one issue in the word. It’s the reintegration of mind and matter.” That is that everything is one.

The point here is that innovators bring back together what has been separated. They integrate ideas that have become separated.

What do you get when you assemble a set of diverse perspectives and skills of passionate people? Well, in the case of Steve Jobs, you get the Macintosh. More generally by bringing together different experiences and perspectives you create new and unexpected opportunities. This is why in Florence the Medici family were the catalyst to kick start the renaissance. They brought together masters from multiple disciplines together to share. When they did the innovators among them created the renaissance. The best modern day example is the TED conferences which seek to bring together technology, entertainment, and design. The goal is to kick start innovators and bring together new opportunities.

So if you want to think differently, pickup The Innovator’s DNA.