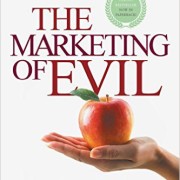 Rarely do I read a book that increases my level of anxiety. Rarely am I so conflicted by a message that I decide to skip the process of writing a blog post for it. You see, writing these blog posts are a part of my process for understanding and incorporating what I read into my consciousness. I purposefully broke that process in early 2013 when I didn’t write my post about The Marketing of Evil. The fundamental premise of the book is that we’re being manipulated as a culture to a different set of values. Two years after having read the book I don’t know that I’ve reached a conclusion as to whether we are or aren’t being manipulated. I also haven’t figured out whether I think those manipulations have an evil purpose as the book implies or if the manipulations are just the natural outcome of learning more about how we think.

The book openly targets the topic of how we feel about homosexuals. They speak of the book After the Ball: How America Will Conquer Its Fear and Hatred of Gays in the ’90s and how this was a roadmap to making homosexual people more socially acceptable in America. The conflict I feel here is that the author, David Kupelian, and many of the evangelical authors of today are somehow missing the obvious point of Christianity. If Jesus said that the greatest commandment is love and America is a so-called Christian nation, why then is it necessary to write a book to conquer hatred of Gays? I have good friends who are openly gay. I have friends who are less-than-open about being Gay and the truth is, I just don’t care. I love them like I love all my brothers and sisters in Christ. We’re all called to love all people – above all of the other perceived commandments.

There’s an undercutting us-vs-them mentality that Christ fought during his life on earth. The idea is that they are trying to pervert us into thinking their ways. However, my homosexual friends don’t judge me for my heterosexual behavior – while that sounds silly consider that many folks do just the opposite to homosexual people.

Economics isn’t the study of money. It’s not the study of economies. It’s the study of people’s behavior when money is involved. If you want to really understand how irrational we are take a look at The Ultimatum game (or look at my review of Drive). When you look deeply into how people think, how they make decisions, and what drives them, you’ll see that our beliefs about how rational we are in our thinking breaks down pretty quickly.

In Demand, there’s the story of ZIP Cars where there’s a discontinuity in subscriptions between a five minute walk to reach a car and a ten minute walk. For those looking for personalized transportation needs inside of densely populated cities a five minute walk to a ten minute walk shouldn’t make much of a difference – but it does. Sources of Power explains that we don’t make rational decisions. We make recognition primed decisions. We recognize something about the environment and pattern our response off of that. We believe our rational rider is in control when instead it’s the unpredictable elephant that our reason is sitting on that is really in control (See Switch and The Happiness Hypothesis for the Rider-Elephant-Path metaphor and Thinking: Fast, and Slow for more about our ability to deceive ourselves.)

Marketing is then our ability to leverage what we know about the human psyche to get people to be more aware of our products and services and to encourage them to purchase. This isn’t inherently a bad thing if you believe that the service that you offer will be of value to the person that you’re marketing to – but let’s break it into the two components. First, there’s the component of making the public aware of your service. The second component is convincing them to buy.

It would seem that making someone aware of what you have to offer would be easy. You put a sign up at the edge of your neighborhood and suddenly everyone in the neighborhood would know that you’re having a garage sale. That works well for small communities (like neighborhoods) where the advertisement is novel but what if you’re trying to sell toothbrushes to a global audience? As it turns out no matter how you reach out to the public they may – or may not choose to pay attention.

The reticular activating system (RAS) is responsible for regulating your sleep and awake cycles and what you pay attention to – and what you don’t. (See Change or Die for more on the RAS). It turns out that marketers have known for some time that getting the RAS to key in on your message is difficult. It’s one of the reasons that we see so many novel – or edgy – ads. The novelty of the ad is what tells the RAS to pay attention – that’s what it’s designed to do. Guerilla Marketing quotes Thomas Smith from London and his instruction to make 20 impressions to get someone to buy – and that was in 1885. You can imagine how many impressions that it takes to get someone’s attention in the information overload age we live in. (See The Information Diet and The Paradox of Choice for more on Information Overload.)

So despite the appearances of being easy – it’s not. However, few people are concerned about the ability to help make people aware of your product – as long as you’re not paying telemarketers to call during the dinner hour (that fewer families get these days.)

Where it gets muddy is when we start speaking of encouraging people to purchase our products. In fact, some techniques for marketing have been outlawed. Subliminal advertising for instance is prohibited because of its effectiveness and the relative difficulty that people have in protecting themselves from it. The basic idea is that a film is played at 24 frames per second. If you put a message or an image on a single frame every few seconds, people won’t be able to consciously register it. They won’t know they’ve seen a message. However, their subconscious will have processed the image and the underlying “instruction” will be processed by the subconscious and it will be leaked up into the consciousness. In the case of our theater example there was a sharp rise in concession sales after inserting frames into the film encouraging folks to consume soda and popcorn. It didn’t take much of a push to get folks to indulge in these concessions.

The tricky part here is that in this case those folks who purchased but wouldn’t normally have purchased from the concession stand are unaware that they’ve been instructed. They believe they really wanted the popcorn – and at some level they did. Consider that the best techniques are those that leave the person being manipulated unaware that they’ve been manipulated. (See Social Engineering for more.)

So at some level we all agree that manipulation of us to the ends of compelling us to purchase something that we don’t want is bad. The tricky part is that done correctly, marketing makes us feel like we wanted to purchase it all along – well, our ego wants to defend itself so it will say that we wanted to buy it anyway. What if the marketing is for something like wearing a seatbelt – where the outcome is that more people are saved because they’re wearing seatbelts? Most folks would say that the ends justify the means. As I said, the waters are murky.

I’ve got my own criticisms of traditional learning. I agree with Glassier that children needs classrooms and Schools Without Failure. (Glassier’s work on Choice Theory is also an interesting read.) I don’t believe that we work high enough on Bloom’s Taxonomy of Educational Objectives. I believe we focus too much on recognition and recall and not enough on problem solving and critical thinking skills. However, I stop short of thinking about education as a conspiracy to turn our children into mindless automatons. There has been a rise in the creative class – people who work heuristically rather than following a fixed set of steps. (See Drive for more on heuristic vs. algorithmic work.) So at the same time when we’re supposedly crushing folk’s ability to think independently we’re asking more and more people to do exactly this. I’m lousy at conspiracy theories in general but here I’m absolutely stumped how this is supposed to work

Paranoia Will Destroy ‘Ya (Or Keep you Alive)

We’ve been wired through natural selection to keep an eye out and look for things that can harm us. It’s better to mistake nothing for a lion in the bushes than the other way around. As a result we’ve got a bit of paranoia that comes to us honestly. However, at some point you have to believe that there are enough honest people that we’ll keep moving our society forward. Perhaps The Marketing of Evil exposes some places that this isn’t true – or maybe it doesn’t. It’s up to you to decide.