Blog
You are here: Home1 / Blog2 / Book Review3 / Book Review-“G” is for Growing: Thirty Years of Research on Children and... 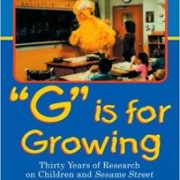 I mentioned in my review of Presentation Zen that I got conflicting input on how to design my slides for my recorded training and that I started doing some research. It makes sense that I’d look at a book like Presentation Zen but in truth it’s this same quest that caused me to read “G” is for Growing: Thirty Years of Research on Children and Sesame Street. To understand why I’d read about Sesame Street you have to understand that they’re the first television program that used formative research to inform how they would develop the program. Of particular interest to me was a vague memory I had about how Sesame Street measured how children’s eyes were – or were not on the screen watching the program. This data was used to demonstrate which segments were engaging and which were not. 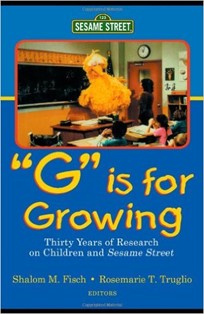 If you want to know what users look at first, for how long, and what they look at next, you need to do eye tracking. The discussion I had with one of the respected designers I consulted with proposed a pattern for scanning the design of the slide which didn’t match my understanding. The concern expressed was that my appearance as a “floating head” on the slide would be too distracting. I maintained – and still maintain – that folks will process the “floating head” last after they’ve processed the static elements on the slide. I had hoped that I’d find research on the topic but alas there doesn’t seem to have been any good research on the topic. I presume this is due to the fact that video presentations are just too new a technology for folks to be able to have tested scenarios like this.

I had hoped that by reading about Sesame Street I could glean come awareness of their techniques that I could apply to my presentation design. Unfortunately, the measurement they were doing was much cruder. They only cared whether the child was watching the screen or not – not necessarily where they were on the screen so this book was of relatively little value in my quest for eye tracking. However, it turns out that there are many other interesting items that came from the book that are useful.

To close the eye tracking discussion, there are now hardware trackers that leverage infrared light to measure where eyes are looking. I’ve ordered a device that is reported to do eye tracking and will report on my results if I get it to work. It turns out that much like micro expressions (See The Titleless Leader, Social Engineering, Trust Me, and Emotional Awareness for more) that eye tracking requires a much higher sampling than the typical 30 times per second that a standard web camera can do. As a result custom hardware is required. It will be very interesting to see how to combine pupil dilation (which was discussed in Trust Me but not in my review.) and eye tracking to provide a picture of how people are looking at material – and how hard they’re thinking when they’re looking at it.

Sesame Street was designed to combat the war on poverty. It is well known that education can account for a large degree of the potential earning of people. It was also known in the 60s that children from lower income families were arriving at school at a disadvantage. Their more wealthy classmates were entering with better basic skills and as a result even walking into kindergarten low income children were already behind. The urgency for Sesame Street was driven by research by Benjamin Bloom that one half of a child’s lifetime intellectual capacity is formed by 5 years of age. The proposal was for the production of a program designed to educate children – particularly those living in poverty. The Children’s Television Workshop – the company that owned the Sesame Street program and brand – was designed to test what worked with children and teach them in the way that worked best.

The program was timed with the formation of the first public television network – which was completed in 1969 — just in time for the premiere broadcast. With the bringing together of funding for an educationally rigorous program and a network to distribute it Sesame Street rose to popularity relatively quickly. (There are some notes about the need to educate parents how Sesame Street was a different kind of educational program but the growth was still meteoric.) The key to the effectiveness was the concept of formative research – which was a term only coined in 1967.

Most research is done in laboratory conditions to solve an academic problem or are conducted after the conclusion of a program to determine its effectiveness. Formative research is different because it’s done during the development process and is designed to help you learn more about how to accomplish the outcome – rather than measuring what you’ve already done. This concept was radically new in 1967 and no one really knew how to apply it to the production of a television program. Ultimately it worked well particularly to test the assumptions that the experts in the industry were saying in the late 60s and early 70s. For instance, originally Muppets were never seen on “the street” with live human actors for fear that the children wouldn’t be able to distinguish fiction from reality but formative research showed that children were much more engaged with the Muppet segments than the “street” segments – until Muppets were added to the “street” segments with the live actors.

Formative research has to be quick so that it can be applied to the problem being researched – but it can’t be sloppy. Formative research doesn’t necessarily have the publications attached to the research that a traditional, evaluative research program may have – but it can certainly have more impact. It’s like the concept in agile of maintaining documentation without ceremony. You still have to do the same things but you do them in the most expedient way possible.

One of the findings of Sesame Street that the key distinguishing factor was love. Though they developed many key phrases – such as “down on the floor moms and dads” – the profound statement about families was that they loved. If there was no love then there was no family. For Children’s Television Workshop their other activities including books and magazines were an extension of their desire to improve education for lower income parents and part of that was supporting these parents in their ability to demonstrate their love for their children and to teach them. As a result CTW created a parent companion magazine which was bound with the child magazine which helped parents connect to the same content that their children were reading in the child magazine.

As How Children Succeed noted, the more safe children feel the more comfortable they are exploring their environments and the more they explore the better off they are. Helping children feel safe is one of the functions of love as was discussed in Spiritual Evolution – we learned moral concepts like love because they were – and are – necessary for human survival.

While my original mission of finding some tips for eye tracking and formative research of my own were thwarted, it was great for me to see how the cultural icon that I grew up with – literally as I was child of the 70s – came to be, what its intent was, and what was learned along the way. Perhaps we’re not done growing as adults of the Sesame Street generation. Check out “G” is for Growing and see if you agree.