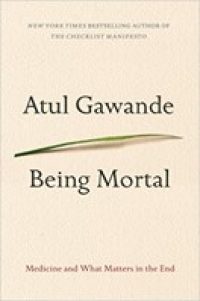 I read Atul Gawande’s last book The Checklist Manifesto and was impressed at the coverage of the importance of checklists in medicine – which had primarily proven their effectiveness in aerospace applications. I was expecting from Being Mortal was a similar treatise on another technique that could be brought to healthcare. I was, however, surprised to read a soulful account of how his family aged and the challenges faced when you have parents that are reaching an age where they’re no longer able to care for themselves.

The Role of Medicine

Medicine fights a losing battle every day. We all know we’re going to die and yet our health care system sets out to fight that very central reality of our existence. While we can ultimately improve the quality of life for many and can forestall the inevitable – we can’t cheat death. Death will win the battle every time. This central reality is at the heart of the struggle. If we know that death is the ultimate victor how long and how hard should we struggle against the inevitable.

I’m no fan of death as I mentioned in my review of On Death and Dying. However, having had several dogs over the years, I’ve had the unenviable task of yielding to it for my friends several times. Each time I knew that I could no longer maintain their quality of life. I knew that the right answer was to help end their suffering. Doing this with a dog is one thing. Doing this for a human is quite another. While few places allow for human suicide, the “right to die” is something that deserves its own consideration. However, this is the end of the story, where the end is obvious. What do you do prior to this point to preserve what matters in life?

What Matters in Life

Over the years I’ve written a few times about the things that seem to matter – things that seem to elevate people from their position. Change or Die notably spoke about the need for relationships and community and how that provided a buffer to life’s challenges. Bowling Alone spoke about the malaise that we face as a society as we become less connected with others through social clubs – including bowling. How Children Succeed talks about the long term impact of relationships and feeling safe.

A funny thing happens when you’re forced to confront your mortality either through a near death experience or because of old age. Your focus, your attention, and your priorities become clearer. When you don’t know when your last day will be you try to do only the things that matter most. As it turns out for the most part what matters most is connecting with the people in your life with which you’ve forged deep relationships. Family and close friends are key when your days are near.

However, we’re working our way back from the very end of life. What matters “long after the threat of living is gone” as the John Melloncamp song asks? The answer may be that being needed is a part of the answer. It became apparent after some experimental living situations in care facilities that assigning a relatively trivial responsibility to elderly patients such as caring for a plant or an animal improved their lifespan – and their happiness.

Happiness is another recurring theme that comes up in our reading. Stumbling on Happiness and The Happiness Hypothesis both clearly seek to illuminate the path to happiness. However, Happiness is woven into the very fabric of our being ever since the framers of the declaration of independence said “We hold these truths to be self-evident, that all men are created equal, that they are endowed by their Creator with certain unalienable Rights, that among these are Life, Liberty, and the pursuit of Happiness” we’ve been seeking out happiness – despite being a relatively new concept when it was first written. There are books like Hardwiring Happiness that seek to teach us how to be happy. With all of the talk of happiness one might conclude that we know what makes us happy.

Unfortunately, we struggle to figure out happiness. Even our wants are fickle. We believe that we should only have certain wants. Thus we have desires about our desires. Despite this as already stated the need for connection is key. We’ve also shared that having responsibilities matter. However, of central concern to Being Mortal are the related topics of freedom and autonomy. We all want to live our lives autonomously. We don’t want to depend on others for transportation or our basic needs.

One of the challenges with the traditional “nursing home” model for warehousing the elderly is that it removes a great deal of freedom and autonomy – more than the limitations placed on the elderly by age itself. Residents are told when to wake and when to sleep. They’re fed meals when it is time to be fed. In truth they retain very little of their freedom – if any at all. If happiness depends even a little on the freedom which so many aged persons seem to agree – then nursing homes must be a miserable place.

A Nice Cage, but a Cage None the Less

Some nursing homes are nice. They have pretty atriums and nice lobbies. Their community rooms are spacious and well decorated. However, the truth is that the residents are not free. As mentioned above, they’re told when to do things and where they can go. If they’re not trapped inside of their own bodies, they’re effectively isolated from society in their nursing home world. Gawande cites several potential residents who say that it’s just not home. It doesn’t have the right feel. So what would it look like to feel like home?

The short answer is that the best substitute for home is a small community of people who live together. The attempts have been done with less than 20 community members with some supporting staff. This arrangement seems to reduce anxiety and stress and lead to happier more connected lives. Community members build the relationships that allow them to care for one another – if not physically at least emotionally. These pods seem to work because there’s someone to share your life with.

While these communities are less common – they’re growing in popularity as fewer people want to be warehoused during their final years and are choosing instead to retain as much of their quality of life as possible.

Ultimately it’s the quality of our lives that is the most important. It’s the ability to live a life worth living. That’s why alternatives to nursing homes are interesting – and the reason why hospice care turns medicine on its ear. Typical medicine makes small sacrifices today for the hope of a better life later. For instance, a surgery to replace a joint introduces pain and risk today for the hope of having more mobility with a replacement joint. However, hospice care sacrifices length of life (quantity) for quality. It’s more important that people be allowed to live with dignity and to be with the people that care for them than for their lives to be artificially extended.

Ultimately for all of us that will face a loved one who is nearing death we need to know what the person’s wishes are. We need to know what they are and are not willing to put up with. Are they interested in resuscitation? Do they want feeding? What are the things in their life that are so important that life without them isn’t acceptable? These are hard questions for sure. It’s hard to accept that there may be a point where the loss of a loved one is the most human thing to allow. Two thirds of patients admitted they’d have a procedure that they didn’t want if their family wanted it. How do we turn this on its ear so that the family does what the patient wants instead?

Gawande doesn’t have answers to every hard question, but there’s certainly wisdom in the conversation about Being Mortal.