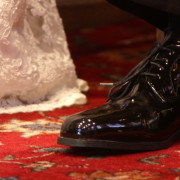 I should first say that wedding photographers are well paid because it’s demanding work. You’ve got to react quickly to capture one of the most important moments in a couple’s life. People are angry when you’re not perfect and they’re frustrated when you ask them for what you need – if it doesn’t fit their plan. So there’s a reason why this isn’t a career I want.

1. Keeping Everyone in Focus is Always First

With today’s high-end digital cameras almost no one shoots on film anymore. Most weddings are shot on Digital SLRs that have a very broad range of sensitivity and a hyper fast shutter speed. They’re capable of stopping the action even in relatively moderate light. However, most photographers are still shooting like they’re shooting film – or like they just don’t understand. Our ultimate goal is to get enough light to the sensor and we have three tools to do this. First, we can change the sensitivity of the sensor. This is typically called the ISO setting but that’s a bit of a misnomer because that was a sensitivity standard for film. The second tool we have is the shutter speed. The longer the shutter is open the more light hits the sensor. This is a great tool except much beyond 1/200th of a second and we have to consider the possibility of blur because of either the camera or the subject moving. The final tool we have is aperture. This is how wide the lens is opened up internally to allow light to pass.

In today’s automatic world where cameras self-adapt to get the right exposure to create the shot, why do we care? In short, because it will lead to better pictures. In wedding situations we’re not focused on action shots so shutter speed isn’t our primary concern. Our primary concern is what is called depth of field. Depth of field is the range of distance from the camera which can be in focus. If we focus on the front of a group of people, will the people in the back row be in focus or not? While it may seem silly the same blurring effect we can use to our advantage to make things pop off the page can make a family seem slightly out of focus. Take a look at this shot which has a very shallow depth of field and thus the background is unintelligible. 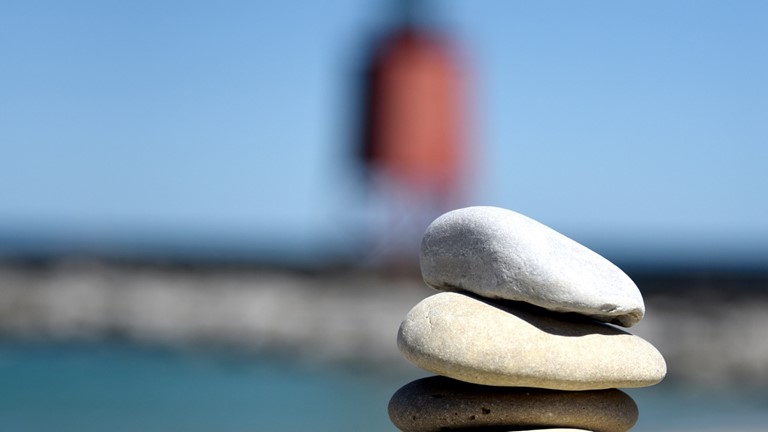 In this case the background is a lighthouse and the aperture that the image was shot at was f5.6. So here’s the tricky set of double inversions that most people struggle to follow. First, the lower the number the lower the depth of field. In other words, the less that will be in focus. However, this is because the aperture is very wide at low f-stop numbers. That means there’s a lot of light coming in the camera. If you raise the f-stop that you take an image at you’re increasing the depth of field and reducing the amount of light coming into the camera.

So what does this have to do with weddings again? Well, in short, most wedding photographers are shooting with wide-open apertures. That’s generally OK when it’s just a shot of the bride and the groom – but what happens when you’re moving to a candle lighting ceremony or the wide shots of the entire family that are often stacked two or three – or four rows deep? In short, the people in the front (typically the bride and groom who are calling the shots) and the people in the back (typically the mom and dad who are paying the bill) are just slightly out of focus. So what can be a stellar shot that becomes the anchor for a wall is ruined for lack of depth of field.

You can’t see the fact that people are out of focus on the back of the camera – it’s just too small to see unless you’re going to really zoom in – which no one has time to do. You just have to know that with large groups you have to sacrifice some light to get to a larger depth of field to keep people in focus.

When we were shooting on film we knew how the film would react every time. There are films that were slightly more sensitive to reds and therefore were good for shooting portraits when you wanted to make people seem more friendly and real. There were other films that shot more neutrally so you could shoot product shots where accurate color reproduction mattered. In our world we’re digital and the sensors have their own biases which the camera manufacturers have worked hard to eliminate. Most of the time this works to our advantage. However, sometimes the adjustments that our eyes and brain make naturally begin to work against us.

If you’re sitting under fluorescent lighting the chances are that your light has a slightly bluish tint to it. That means that when you look at a white object it has slightly more blue than it should have and we should see it as blue – but we don’t. Why don’t we? Well, that’s our eyes and brain working together. We see something as white because we know it should be white. It’s white in our mind because that’s the way it is – not because that’s the way we’re seeing it. (Talk about a scary case of where our perceptions don’t match reality.) Camera manufacturers know this trick that our eyes and brain play and they try to make the camera automatically figure out what white should be in the situation and adjust. The problem is that it’s rarely exactly right and sometimes it can be seriously off. If you’re taking pictures against cream painted walls does the camera treat the walls as white – or the bride’s dress? It’s best not to take the chance. Set the camera’s white balance by shooting a gray or white card. By locking white balance you’ll get accurate whites – and blacks. Here’s a seagull where the gull’s white is really white. It helped that it was a gray day and I could white balance off the water. 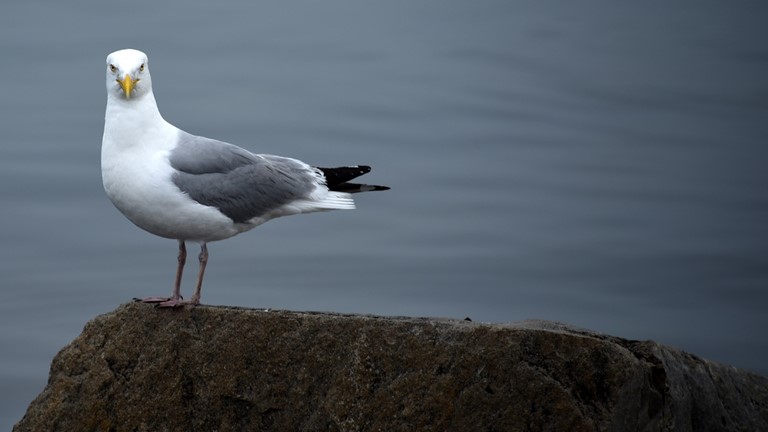 You can correct for poor white balance later if the camera makes reasonable guesses but hand color correcting every image is painstaking and grueling work that it would be better to save if possible. I’d much rather be able to hand off my pictures without special work than to spend more time editing than I spent shooting the wedding.

I’ve been surprised lately with wedding photographers that aren’t clicking away nearly every second during getting ready, the ceremony, and the reception. When you were shooting medium format cameras and film and developing cost more than $1 per shot, you had to be very careful about what you were shooting. However, those days are long gone. We have effectively zero cost for clicking the shutter another time. We don’t even have to print something if it doesn’t come out. We can delete it on the camera or on the computer without wasting anything. Despite the economics of this changing, many photographers haven’t become shutter happy yet. 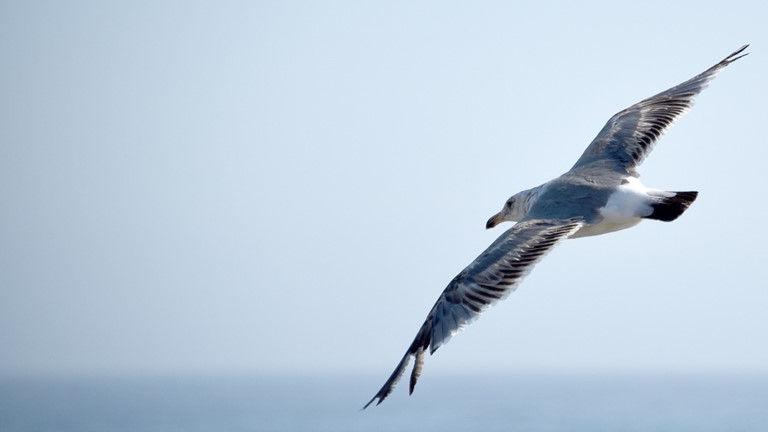 You can’t get shots like the above if you’re not willing to just take shots to see what you get. This is one shot out of probably 20 that I took of that bird flying that day. This one stood out because of the way he fit in the frame and the fact that his face was visible.

So perhaps this tip is more applicable to wedding planners than photographers, however, it’s my experience that many weddings don’t have dedicated wedding planners. There is already so much money being spent that the idea of a wedding planner seems like a luxury that they can’t afford. As a result there are large numbers of largely uninformed and under informed people trying to make it through an emotionally trying day. This is a recipe for disaster. The photographer should be willing to be assertive enough to say how things need to happen – when it’s appropriate. My ex-wife used to be a photographer’s assistant and one of the things that I can remember is that one of the other photographers – whom she didn’t work with often – was known to get the biggest orders and therefore checks. He described in a rather matter-of-fact way that wedding photography was all about crowd control. While his language may be crude, fundamentally he’s got a point. 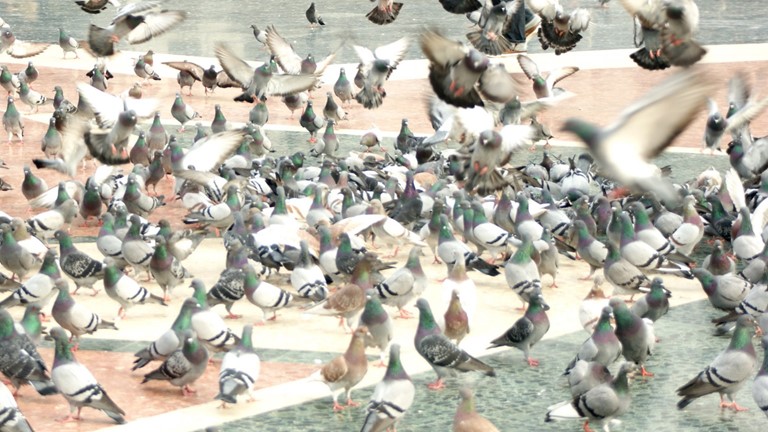 I was in Germany working but had a day to walk around and get to understand the local culture. I came across a plaza with a bunch of pigeons. Obviously there wasn’t anyone directing the crowd of pigeons that had gathered – because they were being fed. I was horrified to see a woman with her small child feeding the birds. They were so close that I was afraid the child was going to be overrun. They weren’t thank goodness, but I would have felt better if the father had been there to limit the number of birds that were gathering around the mother and daughter.

5. Flashes Only Get You So Far

OK, this one is probably for every photographer not just wedding photographers. Have you ever gone to a sports arena or concert and you can watch the flashes going off in the audience? It’s like little sparks of lightning going off all around the venue. The sad part is that none of those flashes were even remotely effective. One important thing to understand is that light “falls off” or decreases in intensity over distance squared. That is twice as much distance requires four times as much power. Yes, there’s the issue of the dispersion angle – or how wide the light is focused – but the key issue is sheer distance. Flashes just aren’t designed to work over distances measured in hundreds of feet. They’re designed to work within a much more narrow range. Though some flashes are useful to 50 feet – very few are. Far too often I see photographers place their flashes more than 20 feet away from the subject and then use an umbrella or something to diffuse the flash (so it doesn’t look so harsh.) The result is that the flashes aren’t even effective at filling in the faces of the people – which is generally what they’re being used for.

As a quick sidebar, the issue with diffusion is less about passing light through a fabric or bouncing it off of a reflective surface. It’s mostly about making the apparent size of the flash larger relative to the subject. Flashes tend to pack a large amount of light into a small package. By reflecting it off of an umbrella the effective size becomes the size of the umbrella.

So where should the flashes be placed? The answer is simple – just outside of the field of view of the camera. The closer they are to the subjects the more effective light they’ll add to the picture.

I’m sure that there are other skills that a professional wedding photographer needs – but these are the top five mistakes I see.

Article: Six Things Every Developer Should Know to Stay Current
Scroll to top