Blog
You are here: Home1 / Blog2 / Professional3 / The Silence of the Fans (not Lambs) – Quiet PCs 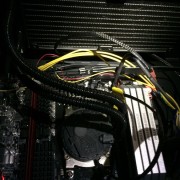 In my work with Lynda I got a chance to connect with some really great audio folks who clean, scrub, and ensure the quality of the audio for Lynda.com. If you’ve read my blog for a while you know that I’ve made a lot of investments on my video studio to get premium quality. (See My Video Studio 2.0). You’ve probably also picked up that I’ve got years of running live audio for churches and productions. So I’m really comfortable with audio – however, I was able to hear a few things when with the folks at Lynda that I’ve never heard before.

My Computer Was the Noisiest Thing in the Room

If you’ve ever been in an anechoic chamber you know how disconcerting it is the first time. Your brain doesn’t know what to do with complete quiet. The fact of the matter is that we’re almost always in the presence of some sort of noise. It can be the wind rustling through the leaves or it can be an airplane taking off. Anywhere between the two we’ve still got noise in the background. The ATS Acoustic Panels that I use seriously dampen the noise but at some point the right answer is to not create the sound in the first place.

When I heard the background noise from my recording machine, I decided that I was going to replace it with something quieter. It was well within range for great audio – but I wanted better. However, that meant I’d have to get past a bunch of marketing hype and get to the real answers about how to create a quiet PC.

I’m going to skip over the fan construction and which kind of bearings are the right kind and the impact of fan blade shape because if you’re looking for quiet machines these things are just going to be right. I didn’t find fans in my search for silence that didn’t have the basic fan blade shape down and that weren’t using at least acceptable bearings.

However, what I do want to talk about are the physics of cooling. In short for convective cooling – air as a transfer medium for heat – we have only the surface area, the amount of air flow and the temperature differential to talk about as ways to control the cooling process. We can’t control the temperature differential between the CPU and case to the ambient air so we’re down to just air flow and surface area.

So how do you generate a large amount of airflow without a lot of noise? It turns out the answer is: go big and go slow. The amount of air being moved breaks down into the size of the blades and the speed at which the blades are turning. If you use larger fans you can turn the blades more slowly to get the same airflow.

It turns out that the noise of a fan is largely driven by the speed at which the blades are turning. If you turn the blades more slowly, you generate less noise. This means in computer cases you want larger and slower fans rather than smaller and faster ones.

If you’re looking for a case you want to find cases that will support 200mm fans – and fans with a high blade count. However, this works for the case, what about the CPU?

The CPU Generates the Heat

The largest heat source in most computers is the CPU. The heat sinks increases the surface area for cooling and then the fan moves air directly across the heat sink surface to cool it quickly. However, the CPU fan has to dissipate a lot of heat and the fan itself is relatively puny. Most CPU fans are 100mm or less. That means that CPU fan must spin at a really high RPM to force enough air to cool the CPU effectively – and this is where most of the noise comes from.

The single hottest component in the computer is the CPU and because of the physics of cooling it – it becomes the source of the largest amount of noise. However, there are ways to address this.

The first way is to use a very large heat sink and a larger – and slower rotation fan. That’s great but there’s only so much space in the inside of the computer. I’ve literally had to cut the side of a PC case to fit one of the larger air based CPU coolers that I’ve installed. There has to be a better way – and there is but it requires the courage to mix water and computers.

At first blush water and computers don’t seem to be a good fit. With sensitive electrical components the introduction of water seems to be a bad idea – and it is. However, if we want to take a lesson from our cars, we can learn a very important lesson.

Our petroleum-based cars are quite literally exploding their way down the road. While the mini-explosions that cars run on generate power, they also generate heat. The solution for dissipating this heat is a radiator. It is water running through the engine with the help of a water pump and out to the radiator where the extra heat is dissipated.

This solves the internal space issue by allowing for the surface area of the radiator to be flat – where a heat sink needs to have a shape that supports the flow of heat from the CPU.

If you want to get your computer quiet you find a way to cool your CPU more quietly and by far a liquid based cooler wins in this space.

What Works for Me

Ultimately I decided on a Cooler Master Seidon 240M – this is a sealed, no-maintenance system which features a radiator that’s 120mm x 240mm. That’s a lot of surface area for cooling. It includes two 120mm fans to blow across the unit. It’s super quiet when the CPU isn’t generating a lot of heat. It’s just very quiet when the CPU is cranking out the cycles and the heat.

In order to accommodate the cooler I had to find a case that it would fit well in. That led me to the Cooler Master HAF X case. It has explicit support for the cooler – and two 200mm low noise fans. It’s cool (literally) and it’s quiet. When you add a quiet power supply like the Cooler Master V1200 you end up with a quiet baseline.

You need a motherboard that has temperature based fan controllers – so it turns the fans on high when the temperature climbs but leaves them running slow when there’s no heat. The motherboard that I chose was an Asus Crosshair V Formula-Z. It supported the AMD 9590 processor I decided on – really for cost/performance reasons. The Intel stuff is faster but at a much higher performance premium. The Asus will vary the fan speeds based on temperature and the tooling is really good to set the temperature to fan speed ratios.

The second largest source of noise in a computer can be the video card. Like the processor when it’s cranking out the cycles, it will generate a lot of heat. That’s why I looked for a video card like the EVGA GTX 970 SC which has onboard fan controllers to only spin the fans when necessary.

In the end the new computer is much quieter than the old one. Just a few small tweaks of finding slower faster fans with more blade surface area, fixing the CPU cooling problem, and finding a silent video card made a big difference.

Book Review-Intimacy Anorexia: The Hidden Addiction in Your Marriage