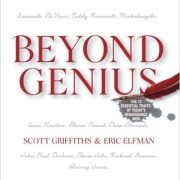 At some level we all would love to be a genius. The drive for mastery that was discussed in Drive is a part of how our new creative class of people operates. While many people are content to focus on a single area of mastery and expertise there are some folks for whom one specialty isn’t sufficient. These are the renaissance men that Beyond Genius: 12 Essential Traits of Today’s Renaissance Men is focused on.

The first time I publicly wrote about renaissance men was in April of 2004. It was an article for Developer.com titled simply “Renaissance Man“. Since then the idea of someone who has unbounded curiosity for multiple topics and areas of interest has some up again and again. In a world where we often focus on specialty in a single area, the Renaissance man is an anomaly. The book Extraordinary Minds examined four different types of greatness through the lens of a few very famous individuals. In fact one of the categories is the maker – someone who creates a new field of study by combining other fields in new and different ways.

Today it’s all too easy to get and remained focused around a single discipline of thought. It’s easy to become pigeon holed into being a doctor or a nurse or a carpenter or an athlete. It’s much harder to become all of these things. It’s harder to have a thirst for learning that is unquenchable – and broadly applicable.

Consider for a moment the book reviews that exist here. In my internal notes I categorize things into buckets of: Personal, Church, Communication & Collaboration, Software Development, Engagement, Information Architecture and Knowledge Management, Leadership, Learning, Management, Marketing & Sales, Psychology, and Miscellaneous. This is a rather diverse set of interests of mine. Things that while I can’t be a master in that I’m enthralled to learn about.

For me the spark that kicked off my learning in multiple areas was settling into a pattern for reading and reviewing content that allowed me to develop a “database” of knowledge as I was doing my reading. The Medici family did the same thing in Florence but without the aid of computers.

The result was the spark that led to the Renaissance period. By gathering together – and in a sense binding together through financial support – a group of masters, they sparked investigation into multiple areas of expertise. The Innovator’s DNA discussed the contributions of the Medici family as did Seeing David in the Stone.

When Thomas Edison created Menlo Park and became famed for his introduction of the incandescent (electric) light bulb he surrounded himself with the experts of the day. He found experts in metallurgy, gas lighting, and other disciplines. While Edison is credited with the inventions he relied on what happens when people who have passion are gathered together. It’s the passions that drive people to become masters in a domain. It’s passion that drives – and passion is infectious. The passion for a topic from one expert infects another. They collectively influence each other to grow. This idea of bringing together people to create innovations was, in part, why Menlo Innovations (the subject of Joy, Inc.) was created.

We value the expertise of Edison but what we fail to realize is that Edison’s contributions were born out of curiosity and a wide ranging set of interests rather than a pure science pursuit of a single topic. It seems that the place for genius isn’t in a single topic. It’s in the space between areas of expertise and more importantly the ability to connect them.

Innovation in the Gaps

There are two radically different approaches to learning. First, become the foremost authority in a single area. Second, to be insanely curious about life and focus on learning whatever it is that interests you. The first has the capacity to lead to being famous within your field and driving forward the entire state of that field. It’s an opportunity to speak at conferences, write books, and be recognized.

By following your interests and developing a level of mastery in multiple sometimes related domains you may not push an individual discipline forward but at the same time you may just make discoveries that make the difference. It’s possible that by bringing together multiple domains of expertise you can make something new – like the incandescent lightbulb.

Before I proceed with the different approaches to learning it’s important to note that the person who chooses to learn multiple things isn’t lazy for not climbing to the pinnacle of the mountain of knowledge in a single area any more than a marathon runner is lazier than a rock climber. They’re different but neither is better than the other. Learning multiple disciplines isn’t a weakness or a cop out – it’s just a different way of expressing greatness.

Consider how Steve Jobs is remembered for the introduction of the Macintosh whose success depended upon things he learned at Xerox’s Palo Alto research center (PARC) and on his love of typography which developed while dropping in on a class on calligraphy and of course computers. Steve Jobs wasn’t a master in a single domain. His curiosity and hunger to “create a ding in the universe” created a different way of learning for him.

The old saying curiosity killed the cat serves to discourage anyone who is curious enough to figure out the world in which they live. Milton wrote “Fools rush in where angels fear to tread” which though is less well known offers the same ominous warning about being curious and exploring. Despite these warnings the Renaissance men will push through with an insatiable hunger for learning – learning whatever they can about what interests them.

Malcolm Knowles and his associates discovered that adults learn based on five components starting with a need to know. (See The Adult Learner for more.) In the Renaissance man the need to know is very strong. It’s an internal motivation to be just a little bit better tomorrow than you are today. It’s the internal drive for knowledge, their curiosity is what makes them great learners.

The twelve traits of the Renaissance Man according to Beyond Genius are:

There are a few of these traits that deserve more discussion.

Some believe that being courageous is to be without fear – however, nothing could be further from the truth. Fear is REQUIRED for courage. Courage isn’t the absence of fear but instead it’s choosing to move forward when you are in fear. To be fearless is crazy and eventually will get you eaten by a lion. Being courageous will help you grow and expand. Fear is a normal, healthy, and often appropriate response to a set of conditions.

Instilling courage into your daily life can be done – perhaps using the recipe in Find Your Courage.

In Creativity, Inc. Ed Catmull describes Pixar’s creativity by saying “… early on, all of our movies suck.” Pixar is recognized as the leader in the development of animated movies with numerous blockbuster successes to their credit and still they’re quite happy to say that they suck when they start. In reality all ideas born of creativity are ugly when they start. It’s only through refinement that the ideas become beautiful, emotional, and powerful.

Most of us, however, lost our creativity. An immature idea was criticized or we were told that we’re not creative people and we shut that part of ourselves down. We leave creativity behind as a childhood idea that shouldn’t be brought into adulthood. However, this is wrong. One of the most widely sought after skills in business today is creativity and yet it’s a skill that we strangle out of people. We have to take back our creativity if we want to live a life Beyond Genius.

The men that Beyond Genius singled out as being Renaissance Men are:

My aspiration isn’t to make this list. My aspiration is to live up to the ideals that men like these lived under. Maybe by doing that, I can move Beyond Genius.