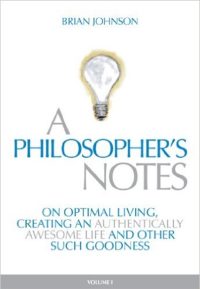 When it comes to reading – and reviewing books – there aren’t many folks I know who read more than I do – at least readers of non-fiction works. However, Brian Johnson has me beat hands down. The list of books that he’s reviewed are impressive to say the least. When I came across his site through a group I’m in I realized I had to read his book and see what he had to say. A Philosopher’s Notes is an interesting book because it’s like cliff notes for a bunch of books all slammed together to make their own book.

Brian is focused on the idea of optimal living. That is: how do you live your life to the fullest? It’s not a get rich program, or how to save the world in 24 hours or anything that promises great rewards without much work. In fact, Brian is careful to say (over and over again) that optimal living takes work. It’s a difficult road to walk. It’s not the easy path.

He ultimately breaks optimal living into these 10 principles (the descriptions are mine):

To live an optimal life you have to live in reality. While most adults spend so much time attempting to avoid reality it’s the source from which all things flow – and therefore something from which happiness comes. We can, if we choose, ignore reality and be delusional but this strategy will ultimately fail. We spend a great deal of energy avoiding reality – energy that could be best spent in making reality better.

Ultimately to live an optimal live, or an abundant life, or a life with purpose – whatever you want to call it – you have to live in reality. That’s why Buddhist monks were instructed “after you find enlightenment, chop wood, drawl water.” Enlightenment is nothing if we’re not able to apply it to the real world. It has to be connected with the world in which we live.

Accepting the real world as it is today is just one perspective on the world. Another perspective is on the world that it can become. In this view we see the greatest possible future (a la optimism) and we seek to create a world that is more in-line with what it can be. That is where our actions and energy come into play as we seek to make the world a better place – one day at a time.

For me the reading I do is seeking to make me a better person – so that as Gandhi said I can “be the change you want to see in the world.” When I write a book review my intent is to share some small nuggets of the wisdom that I gathered up to make a small positive impact on you.

Creating our worlds is about small incremental steps made over a long period of time to shape the world that we’ll have in the future. Whether this is shaping your own schedule to allow for time for meditation or exercise or whether it’s shaping a community through work on a community playhouse, we have the ability to create the world we most desire.

It’s Not Easy Being Green

I do impressions. One of them is Kermit the Frog. One of his classic sayings is that “It’s not easy being green.” Life isn’t easy for any of us. Every one of us has some sort of pain that we’ve encountered. The path to living life to its fullest is paved with hard work day after day. While the results are worth it, the journey to optimal living isn’t easy. However, one potential first step of reading A Philosopher’s Notes isn’t that hard.