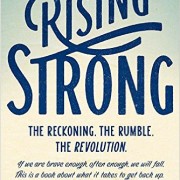 In part 1 of this review of Rising Strong, I focused on the background. The topics of the progression of Brown’s work, learning from failure, the need for an integrated self image, the idea of sanctuary, how we tend to gold plate grit (our struggles), discomfort and our emotions, and fear and courage. In this part of the review we’ll focus on the core – and subtitle – of the book.

Brown says that men and women who want to rise strong are willing to reckon with their emotions. She speaks of the nautical and aeronautical term of dead reckoning – knowing where you are by where you were and the motion that you’ve taken. This is, however, a way of introducing the need to be self-monitoring and self-aware. It’s about learning to understand what happens to us when we’re triggered.

Done at its best I see reckoning like the scene in The Matrix when Neo is being shot at and he sees the bullets, stops them, and ultimately plucks one out of the air inspects it and drops it. I’ve used this analogy with numerous people as they’ve learned to be able to see when situations might normally trigger them. Watching this happen with other people is amazing. You can literally see them stop the hurled bullets, put them down, and respond calmly to the person who is firing at them.

This isn’t the first step in reckoning but the last. It’s not learning to see your emotions but it’s the result you get (most of the time) when you’ve learned what triggers you and why. You begin to see the bullets coming and you can stop them. I say most of the time because everyone who has learned to reckon with themselves is surprised from time-to-time. A bullet is fired from someone you didn’t expect or in a way that you’ve not had happen before and you have to learn how to stop it – and deal with the pain it caused when it hit you.

When our dog Nyx is frustrated, scared, or vaguely of the mind that she thinks that you might hurt her human pack, she emits a low rumble. It’s not a growl as much as it is just her entire body shaking and vibrating. To anyone who has been face-to-face with her when she starts it, it’s a terrifying sound. While I know that she won’t initiate anything, those who are in her gaze don’t. The rumble is a scary place. It’s a place where you might get hurt. However, you can develop a relationship with the rumble where you know you may get hurt but not critically so and on the other side you’ll be a little stronger and a little wiser.

The rumble allows us to reevaluate our perspectives and see if we’re right. It’s a reality check for life. If you don’t believe that your perspective can be warped, take a look at this familiar monument. 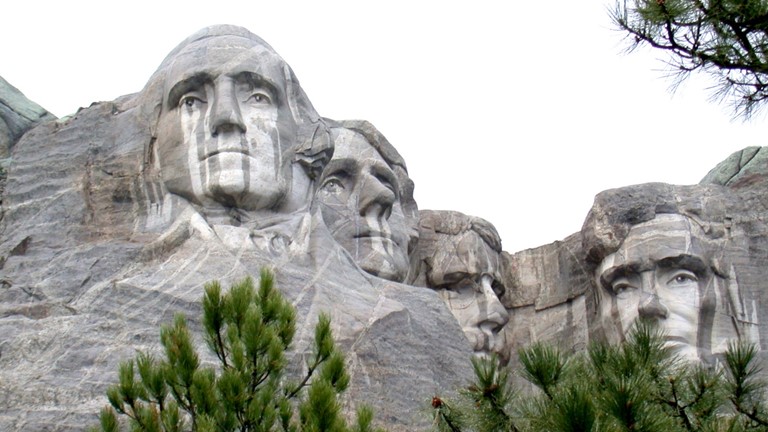 From this perspective (taken from the visitor’s center) the “faces” are huge. In truth their 60 foot height is impressive when considered from a neutral position but when viewed from the ground below them, they take on a massive perspective. Take a look at the same monument a day or two later, but this time from the air. 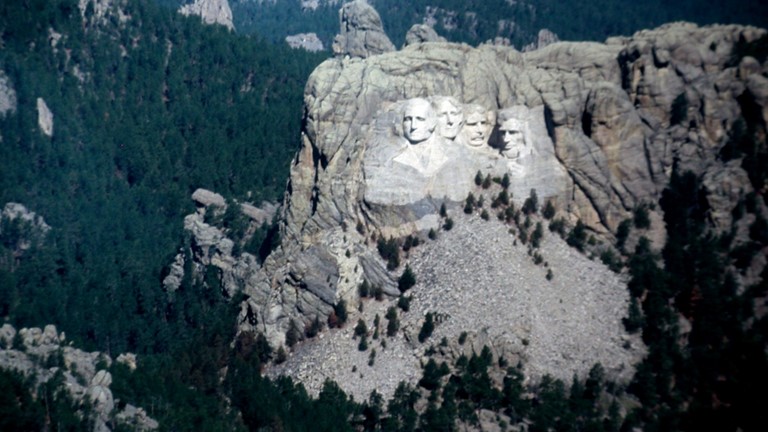 The rumble invites us to challenge our perspectives. Not that there is a right perspective and that the one that we currently hold is wrong but rather that there are other perspectives that can help us to better understand the world that we live in. (See Incognito for how we make a world from our perceptions.) Reckoning is opening up to the ability to see the different perspectives the rumble is reconciling them into a single view.

We rumble with forgiveness. How do we forgive those who have wronged us? How do we prevent them from wronging or harming others. Are we practicing vengeance – or are we truly protecting others?

I used the word repent earlier in this post. It’s a word that has attached to it some negativity. In a literal sense it means to turn away or to change direction. However, we often think about it from the context of a criminal or sinner and their need to repent. This really just means to turn away from – to find a new direction. That is the revolution that Brown speaks of. It’s not an incremental improvement on the way that we are living our lives, it’s a revolutionary change.

Let’s use as an example an alcoholic. They make the decision not to drink. (In twelve step terms they turn over their life to their higher power to relieve their powerlessness to stop drinking.) Most of the “recovering” alcoholics who I’ve met – who have experience in AA – didn’t just stop drinking. They decided to stop drinking and that small change unlocked the opportunity for another small change in the way that they related to others or how they accepted responsibility or how they dealt with stress. It wasn’t that surrendering drinking was the end. It was the beginning.

It’s my belief that there’s no revolutionary war battle that leaves the stars and stripes flying in the end. It’s my belief that there are numerous skirmishes – the rumbles – each which redirect those who are willing to learn. One day after many, many rumbles and a great deal of soul searching you tread back into a place where you haven’t been in a long time and you see the place differently. You realize that your life is no longer ruled by fear and shame. You suddenly see the light through the clouds of the previous way of living.

It’s a strange sense of clarity that things are radically different. They’ve changed – or rather you’ve changed. The circumstances are still the same circumstances. However, you’re different and are more able to respond appropriately to the world around you.

Sometimes the nuggets of gold aren’t in the broad themes of the book but are instead in the undercurrent. They’re in the unstated truths that underlie the surface only appearing for a moment above the water line. Such is the case with the idea that we must surrender to uncertainty. Our egos don’t like uncertainty. They want to believe that we can make it – not that we might make it. When our egos are calling the ball, we’re certain that we’ll win, that we’ll conquer, that we’ll prevail. However, our rational side knows – even if you’ve not had a class on statistics – that there are always probabilities and unconstrained variables.

In my business, I truthfully don’t know where our customers and projects will come from. I get referrals all the time from existing and former customers. However, by the nature of my work customers don’t need my help for years at a time. I don’t know which customers will need to get an upgrade this year or who will deepen their use of the technologies that we provide.

Most of the time, I’m OK with this. It’s a frightening experience to be sure but it’s rare that it keeps me up at night. I’ve surrendered to this uncertainty. I still do marketing and sales. I still respond to inquiries and RFPs. However, I recognize that there are many factors of where the business will come from which are outside of my control – and that I have to surrender the idea that I have control of the situation.

You may be thinking that surrendering to the unknowns of business might be like the uncertainty of losing a job or my job being changed. To an extent this is true but it differs in a few critical ways. First, business can go poorly for a very long time before it will impact my ability to eat or keep the lights on. The actual stakes are relatively low. Second, because it’s a diffuse situation where one big thing isn’t likely to happen to create a real problem, the stakes for each day’s surrender aren’t that large.

In The Paradox of Choice we learned that we can be a maximizer or a satisficer. The satisficer lives with good enough. The maximizer is a perfectionist where only perfect is acceptable. We’re not one or the other but rather we’re on scale between these two points – and we’re on a different scale for each thing. We can be a maximizer on the kind of watch we wear or the type of car we drive and be a satisficer when it comes to buying food.

Surrendering to uncertainty is also at the heart of vulnerability. Being vulnerable (strong vulnerability) is knowing that you may get hurt but choosing to allow it to happen because you are willing to accept that as a possible outcome – because the other positive outcomes are more likely and they outweigh the risk. (See Trust => Vulnerability => Intimacy for more on this.)

Doing the Best They Can

Riding a subway one day a man sits through a stop where a father and his children board the train. It doesn’t take long before the children are loud and begin to annoy and harass the other passengers. After some time and aggravation, the man walks up to the father and asks him “Can’t you see your children are running amuck, can’t you get them under control?” The father looks up and says with a trembling and timid voice “Oh, I’m sorry. I just lost my wife. We’re coming back from the funeral now and I don’t know what I’m going to do.”

This is a variation on a story I heard some time ago. It reminds me that we never know what is going on in someone else’s life. We never know what they’ve been through or how they’re hurting. All we see is their actions and how they’re impacting – and often hurting – us. It’s hard to understand how a father could allow his children to be so wild – until you understand his circumstances at the moment. I think this is at the heart of learning to be compassionate and to love everyone where they are.

You have to accept that you don’t know their circumstances and there are actually many circumstances that can explain (but not justify) their behavior. Kurt Lewin described behavior as a function of both person and environment. That is to say that while our fundamental attribution error (see Crucial Conversations, The Advantage, Switch, and Beyond Boundaries for more on fundamental attribution error.) wants us to believe someone else’s behavior is because of their character it can also be because of their circumstances or environment.

What about the moments when you’re brought to tears? Whether it’s a scathing comment, a moment of intense pain, or simply an emotional flood while watching a movie, we’re startled that we can become overwhelmed with our emotions in a moment. How can this be possible when we’re so sure that “I’ve got this.”

At some level there’s the awareness that our rational selves aren’t really in control, that we’re riding atop of our emotions – which are more than capable and willing to lie to us. (See the Elephant-Rider-Path model in Switch and The Happiness Hypothesis. Also see Thinking, Fast and Slow for how our automatic system can lie to our rational processing.) Paradoxically in order to become more in control of ourselves and our situations we need to become less sure in ourselves. We need to become curious about how we think, where we need to grow, and how we can improve.

Book Review-Mistakes Were Made (But Not by Me): Why We Justify Foolish Beliefs,...
Scroll to top