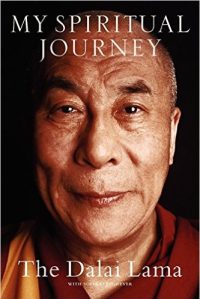 While I’m firm in my faith as a Christian, I’m comfortable with my Buddhist brothers. I’m mindful of my Muslim friends. I say this knowing that in America there is still uneasy tension about the acts of a few Muslim extremists. In truth, I have a deep respect for anyone who has the capacity to live out their faith fully. It’s in this context that I read My Spiritual Journey which is a “self-portrait” of the Dalai Lama.

This isn’t the first time I’ve read about the Dalai Lama’s work. Having read both Emotional Awareness and listened to Destructive Emotions as an audio book, I was familiar with the Dalai Lama’s beliefs but in truth I had very little perspective on how he came to be so wise.

Tibet is an interesting place – at least in my mind. I imagine it as a place of untold beauty at the top of the world, with mountains, animals, and monasteries. It seems like my mental image isn’t too different than what it really is – except that nature may be less forgiving and harsher than the idealized version in my head. The plight of the Tibetan people is also less ideal than I would have imagined.

I can remember incidents where the Chinese government suppressed and put down revolts. Perhaps the most familiar to me was described simply as Tiananmen Square. This is a location where many events have happened over the years where protesters clashed with the Chinese government. While the details are disputed some of the videos that have surfaced from the incidents are hard to ignore.

So when the Dalai Lama describes the forceful nature with which China invaded Tibet and the subsequent massacres of Tibetan people through waves of trying to “gain control.” I have little doubt that the events actually happened. While falling short of saying that every claim that has been made is absolute truth, I’m comfortable in saying that there are clearly ways that China could have behaved better.

I’d love to some day visit Tibet and learn more about the culture and the ecology of the country (or province if you believe China’s claims to authority.)

In Buddhism the belief of reincarnation is core to the beliefs. There are most lineages that can have only one living member at a time – and others like the Dalai Lama’s lineage where it’s possible (but rare) to have two instances of the same spirit living in two bodies at once.

The benefit of this belief system is that in reincarnation there’s an awareness that you need to take care of the Earth so that your next incarnation will be in a better spot – or to have the resources of mother nature. In this way the end goals – of making the world a better place – of Buddhism and Christianity seem aligned – though they approach the journey differently.

We all need to be loved. Humans have the longest child rearing of any animal – that is we’re more fragile for a longer time than any other animal. It’s necessary then for us to be cared for by others for a very long time. From a biological point of view humans need social connections to function. We need the love of our parents as well as the support of our communities. (See Our Kids for more on the impact to our children of parenting.)

The need for love surfaces everywhere in literature from the preoccupation in popular music to the need for healing in books like A Hunger for Healing, God Loves You, How Children Succeed, How to Be An Adult in Relationships, and Love, Acceptance and Forgiveness.

As the Dalai Lama is considered to be a reincarnation of the Bodhisattva of Compassion – so one could easily assume he’s an expert. He’s frequently described as having infinite compassion. However, what is compassion? The Dalai Lama has sometimes referred to compassion as human affection –thus love.

Here I struggle with the Dalai Lama’s perception as he sometimes describes compassion as a mixture of desire and attachment as in a parent’s compassion for a child. Here I believe that the Greek’s separation of philos for this sort of love is a better match. In this way we can separate universal compassion from compassion associated with families – or those whom you decide to treat as family. (See High Orbit – Respecting Grieving for more on how familial relationships differ.)

One of my favorite learnings from Destructive Emotions was that anger is disappointment directed. This is such a simple and profound statement. I use it all the time to stop-time when I’m angry and ask what it is that I’m disappointed in. Is it the circumstances? The other people involved? Or am I disappointed in myself?

I do get angry. As I mentioned in my post The Inner Game of Dialogue it’s not that a master doesn’t get off center. It’s that they discover it sooner and recover faster. I’ve still got much to learn about accepting others as they are and releasing my anger sooner. (See How to Be an Adult in Relationships for more on acceptance.)

Hatred is a stronger and longer emotion. It’s a sustained anger – a sustained desire for vengeance or retribution. (See Who Am I? for more on vengeance as a motivator.) It’s hard to love something that you hate. It’s hard to show compassion when your heart is filled with hatred.

I described love as a decision in my review of Love, Acceptance and Forgiveness. Given my belief that love and compassion are the same thing, it’s no surprise that I believe compassion is a decision – or a commitment as well. The Dalai Lama describes compassion as a firm, thought-out commitment. That is, compassion isn’t a passing fancy or something that you do when the mood strikes but rather is a decision that you implement whether you “feel like it” or not.

It’s in this context that you can begin to see the commitment to compassion. A desire to live the life that you’re called to live.

I’m not a highly competitive person. In general, I prefer to not compete with others. I find my own path to doing things. However, there are times where there is little avoiding being in competition with other people. In these circumstances I find that I’m driven to be better in ways that I wouldn’t normally refine my work. I’m more frequently focused on innovation and individualism than I am on refining my ability.

Enemies – or people with whom you have conflict – can help us to improve even more than competition. Conflict is a step up – or a step above competition. In competition you’re competing but not necessarily conflicting with another person. The Bible says that “iron sharpens iron” (Proverbs 27:17) – it finishes with “so one person sharpens another.” Our best teachers, those who help us to grow and become better are often those enemies who are matched to us and our unique strengths and weaknesses.

One of the basic aspirations of mankind is the pursuit of happiness. Though revolutionary when stated in the declaration of independence, we now accept that happiness is something that everyone strives for. We seek happiness and seek to avoid suffering. In fact, in Thinking, Fast and Slow we learned that we avoid loss (or suffering) more intensely than we seek out happiness.

Once we pass our ability to avoid suffering and move past the stress of everyday life we find that we need to figure out how to be living. That is how we move from striving to thriving. Thriving is happiness. We learned in Change or Die the intense impact our point of view can have on our health. We learned how much of our health care costs are really outcomes of behavioral issues.

Happiness is a frequent theme in reading and writing books as my reviews for Stumbling on Happiness, The Happiness Hypothesis, and Hardwiring Happiness can demonstrate.

In the end, the Dalai Lama’s message is simple. Compassion is a powerful non-violent force that isn’t impotent but rather needs determination and persistence to show its impact. Gandhi had a big impact with his non-violent protests. Hopefully the Tibetans will have the same opportunity for revolution. In the mean time learning a bit more about the Dalai Lama and the life of a simple Tibetan monk may just start you on your own [My] Spiritual Journey.

PrevPreviousBook Review-Science and Pseudoscience in Clinical Psychology
NextBook Review-The Gifts of Imperfection: Let Go of Who You Think You’re Supposed to Be and Embrace Who You AreNext