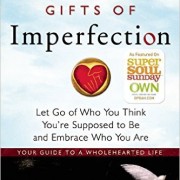 Reading Brown’s work in a non-sequential order makes me think of Star Wars with its episodes and prequels. In some ways it’s more like the movie Premonition which is a magnificent film and also magnificently hard to follow. The premise of the movie is that the star character is experiencing time out of order. Despite this, The Gifts of Imperfection filled in gaps in the story told by Browns subsequent works Daring Greatly and Rising Strong (Part 1 and Part 2 of my review).

The Gifts of Imperfection covers a variety of the same topics in Brown’s other works. I won’t readdress them here. Instead I’ll focus on some of the topics that aren’t in her other works.

One of the challenges that Terri and I’ve seen is that people are literally together but they’re not really connecting. Whether it’s the family out to dinner each with their phone firmly planted at the end of their noses banging out something to someone who is presumably not at the table or it’s the family sitting together in the hospital – it is tragic that we can be together but separate. (We started Kin-to-Kid Connection to help with this challenge.) This is the paradox of the world we live in.

We’re the most technologically connected society. We’ve got WiFi internet in our homes, coffee shops, churches, offices, and nearly everywhere that we might go. We’ve even got WiFi available on airplanes. Our cell phones have data access allowing us to connect with the Internet and the various messaging and social sites. Today we’re able to communicate on live video with our friends half a world away. From a technical aspect of communication perspective, the Pony Express is a distant memory along with any belief that we can’t communicate with anyone at any time.

Hope is Not an Emotion

If you had asked me, I would have said that hope was an emotion – it’s a way that you feel. As I’ve spoken about hope that’s the context that I’ve held. (See Faith, Hope, and Love and The Heart and Soul of Change for two examples.) However, hope isn’t an emotion. It’s a cognitive process. C.R. Snyder a researcher at the University of Kansas believes that hope is: 1) The ability to set realistic goals, 2) ability to meet those goals – including through alternative routes, and 3) belief in ourselves. The good news here is that hope can be learned. (See Mindset for malleability of our mindset.)

I’ve ordered Snyder’s book but I think that he (and Brown) are speaking of a special kind of hope. It’s not hope that the world will be better tomorrow. It’s not hope that someone will get the job. It’s a variant of self-confidence that you can do what you set out to do.

Despite my disagreement with the specifics of Snyder’s work – the idea that you can instill and give rise to hope is important. Hope is sometimes the thing that carries people through serious losses (See On Death and Dying.) Hope may come easier to those who have a future focus (See The Time Paradox for more.)

In The Paradox of Choice we learned of Maximizers, Schwartz’s code word for perfectionists, and their struggle to be happy in life. This intersects with Brown’s world as it relates to shame. Though she says that shame is the birthplace of perfectionism, the opposite is more likely true. Where we feel shame we feel that we are bad – thus that we failed to measure up to a standard. When that standard is perfectionism shame will always exist.

Perfectionism is a liar. Perfectionism says that you can only be accepted when you are perfect. This challenges our fundamental need for connection. The idea that we are unlovable when we’re not perfect isn’t true as we learned in God Loves You.

The idea of the human need for connection is a recurring topic in my research. Numerous articles talk about healthier living for folks in a marriage – and that those who are in relationships in general are happier and healthier. The Science of Trust discussed immigrant groups with better health when they had trusting communities and trusting family ties. It’s not just the quantity of these relationships. It’s the quality – so Facebook friends don’t count.

Spiritual Evolution shared that social bonds in Baboons improved the survival rate of their offspring. So even in our primate cousins we see that connections and relationships matter. If you want to be happy you want relationships. You need connections with other people. Connecting with others means loving them – a special kind of universal love.

The Greek word Agape is one of three Greek words translated to mean love in the English language. In Buddhism the word is compassion. Buried in this is the meaning that we are all connected to one another. Compassion is cultivated because we know that we are all one. We can’t survive without one another. The bubble that we call Earth is a delicate balance of one set of interconnected ecosystems.

This kind of global love is an irreducible need of all humans. We’re wired to need connection with one another because it was necessary for us to band together to form communities and care – so that we could survive.

Brown shares the acronym DIG for considering our condition and living wholeheartedly. The letters stand for:

By taking these steps – by looking into ourselves and digging deep we can become more wholehearted and along the way better understand our defining boundaries.

If you were looking for a marker to find wholehearted people – to find the people who are really experiencing life what would you look for? It turns out looking for someone who is clear about their boundaries might be the best way to find wholehearted people. Though it seems paradoxical that the most open people might be people who are the most boundary conscious – it isn’t when you dig in. (See Boundaries and Beyond Boundaries for more about what boundaries are.)

Knowing these answers frees them up to be who they truly are all the time. They don’t have to lament over each decision. They can just respond as themselves. They’ve gotten out of the boxes that define them and as a result they’re no longer trapped by their boundaries though they may be defined by them. (See The Anatomy of Peace for more on boxes.)

The great irony of our societies is that in science we’ve accepted that there’s a lot that we don’t know. We’ve learned time and time again that we were wrong or at least incomplete in our understanding of something. As a result science has become malleable to the idea of errors of thinking. Faith, on the other hand, insists in one true and correct answer without any acceptance that there might be other answers or that we might be incorrect.

It’s odd that faith has come to mean that we’re certain even when we have no evidence. Shouldn’t faith be bent according to what we learn to be true? The Dalai Lama commented that Buddhism must change to the truths discovered through science – that is what the Buddha said must happen. (See Emotional Awareness for more.)

Shut Up and Dance

One of my favorite songs over the last few months has been Shut Up and Dance by Walk the Moon on their Talking is Hard album. Part of the lyrics are “Oh don’t you dare look back Just keep your eyes on me I said you’re holding back She said shut up and dance with me.” For me the lyrics are a reminder to focus on where you are – not what other folks are thinking. To focus on the present in the moment and to no worry how others think you are. I was reminded of this as Brown speaks of a moment with her daughter where she focused exclusively on her – and not what the others around them might be thinking.

We’re all imperfect creatures. The trick is to recognize The Gift of [Our] Imperfection[s].

Book Review-Alone Together: Why We Expect More from Technology and Less from...
Scroll to top
%d bloggers like this: