Book Review-The Medici Effect: What Elephants and Epidemics Can Teach Us About Innovation 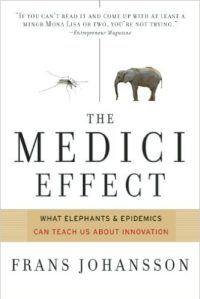 Book Review-The Medici Effect: What Elephants and Epidemics Can Teach Us About Innovation

It’s the Medici family that is responsible – in part – for kicking off the Renaissance. By bringing together masters in multiple disciplines they allowed knowledge to flow across the boundaries of discipline and thereby they created the opportunities for intersection. The Medici Effect is a book about the ideas at the intersection of different disciplines.

Any idiot can have ideas. Having an idea doesn’t mean it’s a good idea. It’s a good idea when others find it relevant, important, and valuable. While we’re all inherently creativity as Creative Confidence, Creativity, Inc., Group Genius, and Play
have discussed. We’re creative until our inner critic – fed by the voices of external critics – squashes our drive to be creative. We begin to believe the lie that we aren’t creative and never will be. (See Mindset for a fixed mindset.)

Creativity is a notably messy process. Whether you’re giving kindergartners finger paints or you’re trying new business solutions there are bound to be messes and failures. As adults we don’t like failures because too many of us were raised with performance based love and we believe that if we fail then we are failures. (See The Road Less Traveled for more on performance-based love.) The true failure however, is to not try. Everyone who seeks creative success has had failure. The trick is that they didn’t let the failure stop them from moving forward.

It’s not enough to have an idea. Nor is it good enough to have a creative idea. For an idea to be innovative it has to be implemented and adopted. (See Diffusion of Innovations and Unleashing Innovation for more.) The impact of the Renaissance was innovation. The ideas were creative – but more importantly they were adopted.

My sister wanted to be a marine biologist as a child and as such she had an interest in marine biology that she carries with her. At some point while visiting her I was asking whether the water we were passing over – the intercoastal – was salt water she responded that the water was brackish water. That is the water was neither salt water like the ocean nor freshwater like a stream or spring.

Medici like innovation is like this. It occurs at the intersection of two seemingly incompatible disciplines. Brackish water occurs when freshwater and salt water mix as often happens at the deltas of rivers as they empty into the sea. It also happens along areas where the tide can come up over freshwater supplies. It lives at the intersection between salt and non-salt water.

Innovators are like this. Because there aren’t many innovators – because most people live in one world or another, those who can live in multiple worlds – or worlds at the intersection of others – can make their own worlds. (See Extraordinary Minds for the maker type of genius – who is the innovator.)

Memes are mental viruses. They replicate through the use of imitation and copying. They leap from brain-to-brain. They travel. Sometimes they’re hard to eradicate when they’re wrongheaded or bad. Consider for a moment how autism has been incorrectly linked to vaccines. A single article published in the Lancet – and since retracted due to ethical issues that cost the lead author his medical license has created a paranoia about vaccines that has yet to be effectively quashed.

It makes sense though. Autism is typically discovered right around the time of vaccinations so vaccinations must be the cause, right? Just because two things are coincident doesn’t mean that one is causal for the other. No one would say that autism causes vaccinations – so why do we so readily accept that the opposite is true even though the evidence is overwhelming at this point that there is no causal relationship between vaccines and autism. (As a sidebar, it appears to be a poorly timed histamine response in the mother during pregnancy may be a contributing factor but more research is needed here.)

Sometimes we become so ingrained in an industry that we can’t see the frameworks of the industry that are holding us back. Once you’ve become a part of the establishment it’s very hard to slay the sacred cows or say that the emperor has no clothes.

You need raw material in order to be innovative. Without any training you don’t have any structure or foundation to think about things. (See Sources of Power for more on mental models.) As a result, the possibility of being innovative climbs as you know more about a subject – up to a point. Once you reach a certain point the probability of innovation plateaus before falling off. Once you become too established in an area of knowledge you stop questioning it. You follow chains of association until they enslave you.

The recipe for becoming an innovator then isn’t to be a learned person in the traditional go to college and study a single topic type of way. Instead, innovators tend to be self-learners. They have a voracious appetite for the things that interest them. Innovators may have little or no schooling but are instead intensely curious and motivated towards the hard work of learning the things that interest them. (See The Adult Learner for more on what motivates people to learn.)

If creativity comes from two components – combination of different concepts and randomness – the ingredient that will bother most folks is the randomness component. However, randomness is at the heart of the world we live in even if we don’t want to admit it.

With the notable exception of Ansel Adams, every great photographer I’ve ever heard about took a lot of photos to get good. They didn’t know how to compose a scene or to execute the technical mechanics of their cameras until they learned. They learned randomly through trial and error. Life is like this. Despite our propensity for trying to find order in the data, there is randomness.

Everyone has a level of risk that they’re comfortable with. We’re willing to drive at a certain speed because we trust our ability to drive a car and the features of the car that support that being an acceptable level of risk. In my sports car I’d drive faster than I will in any other vehicle because I knew the capabilities of the car. In fact, advances like ABS haven’t changed the accident rate of cars. Our relative number of accidents has stayed relatively constant.

The Risk of Inaction

In the end, the worst risk is the risk of doing nothing. The moment you stop trying, you start dying. I mean this from both the figurative point of view and the literal point of view, if you’re not moving forward and everything else including time is – you’re relatively speaking moving backward. On the more practical side as people retire without anything to do, they end up living shorter lives. Those folks who live the longest lives and without the debilitating effects of Alzheimer’s and dementia are those who are the most active. It’s not that being engaged and taking risks immunizes you to the effects of aging or mental disease, but it does increase your resistance to the conditions.

In your heart and in your organizations it’s important to ensure that you are making the process of taking risks easier and the process of inaction gets harder – and that’s hard to do. However, the impact of supporting risk is you make them easier and people take them more often. The impact of more risks is more failures – and more successes. Ultimately more successes means that you may have been able to kick off your own renaissance period in your organization all thanks to your own [The] Medici Effect.

PrevPreviousBook Review-Alone Together: Why We Expect More from Technology and Less from Each Other
NextBook Review-Rest Assured: A Recovery Plan for Weary SoulsNext