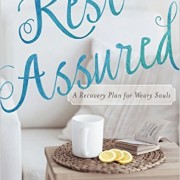 Sometimes my reading list is influenced by my friends and family. I read not so much because they tell me to read something or even that they suggest it. Instead I read things to be more connected with them. It’s true that my wife mentioned that I might like to read Rest Assured but it’s because it was helpful to her and she wanted to be able to have a conversation about it. Of course, it doesn’t hurt that she also has access to my private notes on the book so she doesn’t have to write as much for herself. We can thus lean on each other’s work to allow us to both learn more from it.

In a world where every site, game, and interaction seems to want to give you a gold star or some sort of a badge for doing something, the one that most people seem to covet the most is the busyness badge. When I speak with my fellow speakers at a conference they speak of their burgeoning schedules and platinum status on airlines and with hotels. They seem simultaneously run down by the schedule and proud that they have it.

On a more personal level, if you read Christmas letters you find out all of the things that families of your friends have been doing. Each event which was previously chronicled on Facebook for others to envy is relived and amplified as a way of extracting admiration – or in some cases just to catch you up on what they’re doing. Catching up is certainly the feeling that you can get as you have to figure out where you left the story and what has changed.

In our own lives we want the busyness badge because it means that we’ve arrived. We’re productive. We matter. We make an impact. However, in all of this we fail to ask if what we’re busy with really matters. Does the trip to Africa matter – or does it matter how it’s given you a heart for the struggling people. Certainly we need experiences but at the same time we need the ability to process the results of these events and activities, an opportunity that we don’t often allow for ourselves.

One of the lessons from systems thinking is that efficiency and optimizations necessarily reduce resiliency. (See The Fifth Discipline and especially Thinking in Systems for more.) The extra performance you get comes from somewhere and that place is the set of checks and balances that keep the system running even when the variables change.

I also learned the lesson from flying. Planes are created with what is called dynamic stability. That is like sitting on the bottom of a rod extended from a ball. You’ll always default back to a center position. This is opposed to dynamic instability which is like trying to balance yourself on the top of a long rod attached to the top of a ball. Instead of being able to rest like you can on the bottom, on the top you have to be ever vigilant and constantly making adjustments to stay in balance.

On the bottom there is lots of room for margin. Your mind can wander. You can release control. On the top there’s no margin. You have to remain engaged at all times.

We weren’t designed to live like this. As we learned in How Children Succeed, our fight or flight system was never meant to be left in the on position. It was only supposed to be switched on for a while. Some of us live in a constant fight or flight mode never able to stop and relax.

Ever since sloth made its way to the list of seven deadly sins we’ve been avoiding the perception of being slothful. In the process we’ve confused the natural need for rest with a persistent state of slothfulness. Rest isn’t a reward, it’s a requirement.

When we rest we’re not necessarily lazy. Resting is recharging. It’s rebuilding our strength to face the next battle, to climb the next hill, and to take the next risk. In our culture the idea that you would take a “lazy day” seems sacrilegious – even on a vacation. Most of us take our work with us on vacation. Forty percent of Americans don’t even use all of the vacation time that they are given each year.

In our attempt to avoid being perceived as slothful, we’ve become overworked, overstressed, and overwhelmed.

I believe strongly that you cannot give what you don’t have. Despite this I see many people trying to give healing and support to others when they’re emotionally run down and when they have nothing left to offer. Instead of doing self-care they seek to care for others. My eldest daughter is a nurse and we hear stories all the time of her and her coworkers not taking a lunch break because they’re too busy or they’re too concerned that the other nurses can’t take care of their patients as well as they can.

We’ve come to believe that taking time for ourselves is a sin and that solitude is loneliness. Instead of recognizing the Sabbath we run like we’re fleeing a sabretooth tiger. We’ve learned – incorrectly – that it’s greedy and rude to take care of our own needs. Instead of investing a little time to get centered and ready to share our gifts with the world we try to share what we don’t have.

Consider the Dalai Lama. The gifts of compassion that he offers the world are life giving. However, as a Buddhist monk he makes substantial time each day for meditative prayer so that he has the inner fortitude to share with others. If the Dalai Lama still needs daily meditation and prayer – don’t we?

The Fault of Future Focused

I’m a future focused person (See The Time Paradox for more.) That means that I tend to live in the future. I look forward to a day when the struggle is less and that I’ve achieved my goals – whatever that means. This is good in that it allows me to plan for the future and keep positive that no matter how bad things are at the moment they’ll get better someday.

However, the negative to this perspective is that I’ll sometimes forget to recognize the blessings in my life today. I spend so much time living for tomorrow I forget to live in the here and now. Sometimes stopping to smell the roses is important – even for those trying to grow rose bushes.

It’s not that we get less time than other people. The Earth rotates at the same speed for you and me as those people who are highly productive and those who are recharged by their rest. However, the way that we spend our time is important. We can spend our time lounging in front of the next situation comedy (sitcom) from Hollywood or we can spend it talking with friends. What we spend our time on will depend how rested we feel.

As was mentioned in Alone Together, we’re wired for connection with other humans. When we spend our time connecting with others – when we’re just relaxing and enjoying their company – we become restored. When we spend our leisure time watching TV or playing video games we’re not getting the most benefit from our leisure. Without trying to turn our rest and relaxation into another opportunity for “productivity”, there are things that we can choose to do which will more thoroughly and quickly restore our souls.

While each of us enjoys a different kind of rest, a different kind of leisure, we can accidentally choose leisure time which isn’t rewarding or fulfilling – or we can choose to turn our rest into a competition. Play mentioned a Runner’s World Article which divided runners into four categories: the exerciser, the competitor, the enthusiast, and the socializer. Each one experienced running differently. The exerciser experienced the physical activity. The competitor experienced the power of competition. The enthusiast experiences the moment – the leisure. The socializers experience the connection. (See Who Am I? for 16 different motivational factors.) Experiencing the moment or the leisure and experiencing the connection with others will powerfully restore the runners. Those who are running for physical activity may be restored if their need for physical activity isn’t being met. Those who are, however, competing may not receive any rest from running at all.

I do a talk on converting an email culture into a SharePoint culture. In that talk I assess the level of addiction that we have with email. When I started giving the talk few people – maybe a third of the room – would admit to having an addiction with email and our phones. When I give the talk these days more than 80% of the hands go up when I asked if they’re addicted to email.

We’ve become too tethered to our technology and not tethered enough to each other. (See Alone Together
for more on this central concept.) We’ve become the dog tethered in the back yard to a stake. We never get to experience what it’s like to be inside each other’s houses – or lives. What we need for rest is to spend more time with each other connecting about things that matter and less time trying to follow Facebook. Rest Assured, if we do that we’ll find a way to slow down our crazy pace and feel more peace.

Book Review-The Medici Effect: What Elephants and Epidemics Can Teach Us About...

Book Review-The Fred Factor: How Passion in Your Work and Life Can Turn the...
Scroll to top