Blog
You are here: Home1 / Blog2 / Professional3 / Fractal Along the Edges 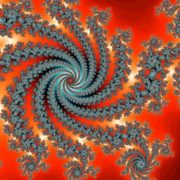 It was years ago when I first was introduced to fractal art. Even today I have a book sitting on my shelf – now over twenty-five years old – about fractal art. It was interesting because at one magnification a line would seem straight and plain. As you would keep zooming in you would see that the line displayed the same pattern of uniqueness as the overall shape. The deeper and the deeper that you went in fractal art the more it became the same. The edge of the lines in fractal art wasn’t as simple as I’d liked to have believed.

The importance of this, as I’ve been reflecting on my recent readings, and life in general, is that the more expertise and mastery we obtain, the better we are able to see the edges with clarity and to know what is inside or outside of the bounds.

A Life of Contradictions

Every life is full of contradictions. Play but study. Consider others with compassion but be true to yourself and take care of yourself. Be present in the moment but consider the consequences. Optimize the meeting but not so much that you take out the relationship development.

The joke is that a consultant will answer every question with “it depends.” Having had experience in multiple situations, the consultant naturally recognizes that it takes different answers for different environments. English Bleeker and Associates used to run a conference titled the Best Practices Conference. In speaking at the event and speaking with the organizers, everyone knew that there was no one set of practices that was best for everyone – only proven practices that worked for others.

My friend Paul Culmsee made light of best practices in The Heretic’s Guide to Best Practices because there are no best practices. There are all these contradictions. We know how to manage projects well because the Project Management Institute publishes the Project Management Body of Knowledge (PMBOK), but rarely do project managers follow it because the process is too heavy and difficult for most projects. A skilled project manager knows how to take what works – and leave the rest.

In this life of contradictions, we’re forced to decide which side to land on. Is something inside or outside of the bounds? It’s these lines in life – it’s the tough decisions which I don’t see straight lines any longer. I see much more intricate patterns and more study needed to understand whether something is a yes or no.

Most folks believe that the industrial revolution was triggered and sustained by the power of steam. The industrial revolution converted folks from largely working in cottage industries defined by hand-crafted goods to folks who operated machinery. Even those who were in their cottage crafting benefited from new machinery that made their work easier and more consistent.

The result was a system that allowed for specialization and interoperability, because the standards were well-known and well-used. The personal computer industry was built on top of this standardization. Power supplies have standard connectors and pin orientations. Hard disk drives have standard interfaces. Add-in cards plug into a standard bus.

The problems that we often face in life are problems which have no standards, ambiguous standards, or incorrect standards. What’s the standard for friendship? How can you define mastery? How do you establish competency? They’re hard questions with no clear answers.

The real world, which you and I live in, is full of what Mandelbrot (the creator of this field of fractal art) would call “roughness”. That is, it’s not as clean as we would like to believe. Everywhere that we look we find simplicity and complexity. We see the smooth edge of a piece of wood until we zoom in and see its roughness. We attempt to predict events but can’t really predict them. We expect there will be a problem but we don’t know for sure. Yellowstone is an area of geological instability, where the heat in the earth’s core is leaking up, creating geysers and hot springs. When will the Yellowstone area experience another seismic event that triggers the rapid release of energy (like an earthquake or volcano)? We don’t know.

At a personal level, we’ve all seen the news stories about the people who suddenly “snapped.” The news crew interviews the neighbors of a suicide bomber or a serial killer or someone who shoots up a public place, and the interviewee talks about “What a nice guy he was. I had no idea.” We can’t predict the behavior of individual people. We don’t know what stressors are functioning on people and how that will play out.

Work like Steven Reiss’ work in Who Am I? and The Normal Personality lead us to the conclusion that we can map the behavior of a person, and if we just know what values they hold then we’ll be able to predict their behavior. However, my experience is that everyone’s hurts are unique, and that if you hit someone where they hurt they’ll behave in unexpected ways. In short, we can’t know how they’ll behave. No matter how much effort we put into predicting the unpredictable – we can’t be successful because it’s unpredictable.

In this fractal world, the lines that we think are clear are just areas where we can discover new nuances to understand. Consider a situation where the rules are well-understood. When should you break them? For instance, when should you run a red light? Well, there are several circumstances where the rule (law) of stopping for a red light can be the wrong answer.

What if there’s a semi-truck come up behind you but not stopping? What if there’s a gunman behind you? What if there’s no one coming and someone you love is with you and needs medical attention? We believe that we know where the lines are drawn but, in reality, the closer we look the more we realize that there is more to the situation than the simple rule.

As a pilot, I make it a rule to not jump out of an airplane. I find that it’s counterproductive to jump out of airplanes if you want to fly them. That is, of course, right up to the point where there’s a problem with the airplane that will cause it to crash. In which case, I’m already out the door with my parachute on wishing you luck.

So what’s the point of this post? The point is that we need to pay more attention to the edges, and be careful about how quickly we judge others who see the “right” answer differently than we see it. It can be that they’re seeing things on the other side of the line than the way we see it. We may need to zoom in to see where the real line is – as long as we accept that we may find what we don’t expect.

Book Review-Peak: Secrets from the New Science of Expertise
Scroll to top