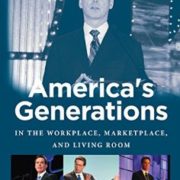 It’s January 28th 1986 and I’ve stayed home from school. I’m sitting in the basement of the tri-level home that my parents owned, when my mom called and told me that the Space Shuttle Challenger had exploded. I turned the TV channel I was watching to a major network and saw a replay of what had happened. I was dumbstruck. I didn’t understand how it could happen. I didn’t understand what to think. Later that evening, Ronald Reagan delivered one of the most historic speeches of our time. (One I studied while reading Great Speeches for Better Speaking.)

That was one of many defining moments in my childhood. The fact that I had stayed home from school by myself was another. As a member of Generation X, I got healthy doses of latchkey kid and divorced parents. I was shaped by these experiences in ways that I am sure I still don’t recognize. So were my friends. We were learning our values and listening to our environment to discover what we believed was true and correct.

This is the heart of generational work – the awareness that children are formed by their upbringing – for better and for worse. They take the values they’ve developed and carry them into the world as they leave high school. That’s where the story starts for America’s Generations: In the Workplace, Marketplace and Living Room.

Throughout America’s Generations, Chuck Underwood describes the different values that each generation has. However, upon reflection I believe that there are three distinct things that Underwood is bucketing into the larger container called “values”.

Underwood seeks to distill an understanding of each generation into a series of pictures. The goal is to create understanding quickly. However, I struggled to put the pictures into frames that I could use to compare one generation to another. I wanted to see how career expectations shifted over the generations, but that wasn’t always the easiest to do based on the structure of the book. As a result, I created the following grid that largely – but not completely – follows Underwood’s observations in the book. So some of these are Underwood’s research and observation, and some of it is my extrapolation.

Not every cell is filled out in the preceding because I didn’t quite know how to express the views. This, for me, is a work in progress. I’ll update it as I learn more. As we look at this grid, how did our values, self-image, and world view change so dramatically from one generation to another? The answer is in a set of defining moments – some personal and some shared.

Each generation is shaped by the environment as the children grow up. Those who grow up in the golden age of automobiles and the development of the Interstate system love cars and travel by car. Those who grow up during the explosion of appliances and convenience devices still look for these devices today. The environment changed from the prominent themes of life of the latchkey kids that make up Generation X to the rise of rock and roll that fueled the hearts and minds of the boomers.

Here’s a collection of potential defining moments for you to consider how they shaped you and the people that you work with:

I certainly could have listed more. And there’s plenty of opportunity to reflect on how things changed as a result of the event. The death of Princess Diana may not have impacted you personally or it might have given you reason to be frustrated with the press and the paparazzi they employ. Perhaps you decided to not purchase tabloid magazines.

Chernobyl might have changed your views on the safety of nuclear power or made you ever more vigilant. It could have made you aware of the larger forces of which you are not in control, or softened your heart for the plight of those in eastern Europe. Whatever the personal shift, it’s a shared and defining moment with millions of others on the planet and in the United States.

Things are different today in ways that previous generations could have never predicted. I realize that millennials view media differently. They didn’t know a world without the Internet. They don’t think about staying home to watch “Must-See TV.” Everything can be DVRed. Movies are available on-demand without the need to even get up off the couch. They barely remember dial tone, and a clutch and manual transmission in a car are anomalies. Their view of the world has to be different than mine because I remember these things, and my ideas of normal were formed with them in them.

One of the most pervasive changes across the generations – in my opinion – is the perspective on sex.

Sex Through the Generations

Sex has been with humans since the beginning of humanity and so has the result — pregnancy. Throughout history, humans have expected that pregnancies follow sex like harvests follow plantings. The introduction of the condom in an attempt to deter the natural consequences of sex is very old. By the 1920s, a relatively effective condom – the latex condom — was developed, improving safety from pregnancies. By the mid-to-late 1960s, the birth control pill began to come into regular use. With two layers of protection against pregnancies, the potentially life-changing consequences of sex could be reasonably avoided. Further accelerating this change was the Roe v. Wade Supreme Court decision legalizing abortion in 1973. Even if contraceptives failed or an accidental pregnancy occurred, the consequences of sex could be legally avoided now – regardless of ethical, moral, or religious views. E (Please don’t attempt to ascertain my view on the complicated topic of abortion from my few words here – my perspective is substantially more nuanced than I have time to go into.)

As Diffusion of Innovations illuminated, you can explain the diffusion of the innovation but not its impact on society. The impact of these innovations on society was to reduce the stigma associated with premarital sex. Instead of it being a risky behavior it became a recreational pastime. The Boomers wanted “free love” and many of them got it for the price of a condom at the local drug store. (And sometimes without that protection.)

Still, societal stereotypes change slowly. Sex may have been happening in the bedroom but it wasn’t being talked about. TV shows still showed married couples sleeping in separate twin beds. Censors were concerned about the changing attitudes in society. Mork and Mindy couldn’t say that Mindy was pregnant because that presumably meant that Mork and Mindy had had sex. However, it’s perfectly OK to say “I’m having a baby”, so that’s what the show used. (Don’t ask me why this was better, because I don’t really know.)

However, with years of erosion of the traditional values that protected society from unwanted pregnancies, is it any wonder that Millennials are “hooking up” and having casual sex in numbers that would concern even their free-wheeling Boomer parents? Sex, for many but not all Millennials, is something that is a recreational activity – not an act of bonding or something shared only in a committed relationship.

My point in highlighting this isn’t to justify the changes or even voice approval for them. My point to raise is that the world is different now. Our generational world view has been shaped by our different environment and experiences, and the result is a different view on many things, including sex.

So how does this help us? Who cares if we know that the views of millennials are different than the views of the Boomers? The answer is because it can change how we market to them, how we lead them, and how we relate to them.

I have a component of my world which is marketing The SharePoint Shepherd’s Guide. Some of my most effective marketing messages have been “retro”. When I ask about “Must See TV” or “Where’s the Beef?” my response rates go up. By recognizing the key perspectives and the key messages, I connect better with the audience and get better responses.

In another corner of my world, I create educational content, and the content providers – the libraries – that I work with are absolutely concerned with the feedback they’re getting about how Millennials are resisting traditional learning management systems. Their organizations are presenting them with the traditional video lecture educational content and they’re not taking it. (The dirty little secret in video training is the engagement rates are very low – few people actually take the courses – but the rates for Millennials are much lower than the norm.) I talk to them about ways to improve this engagement by psychological framing but also how their thinking and information processing styles are different.

I also hear of employers struggling to build generational gearboxes – a set of tools allowing employees of different generations to effectively relate and work together. These employers need the wisdom, knowledge, and know-how of the Silents and boomers and the completely free-wheeling, out-of-the-box, crowd-sourced vitality of the Millennials. And somehow they’ve got to synchronize those employees in ways that allow them to work together.

I don’t know whether by simply reading America’s Generations that you’ll discover answers to marketing, employing, educating, and relating to all five generations – but I’m sure you’ll discover interesting things to ask others about.

Book Review-The Halo Effect: … and the Eight Other Business Delusions That...
Scroll to top