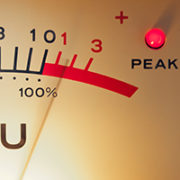 It was immediately after my divorce when I stumbled on a flash of insight. I’d clean out the house each week until I had two trash cans filled. Perhaps it was less insight and more that my trash company would only take two trash cans per week. This created a limit for my cleanup. I ended up setting the goal to do two trash cans a week so that I could make progress each week. This, ultimately, was how I stumbled on the basis for building short-term habits.

My habit of two trash cans per week served me well for several months as I purged the leftovers from my divorce – both physically and mentally. I don’t still clean the house to fill two trash cans, but I do still read a book each week – another different habit I started at the same time. Sometimes the habits that you create aren’t needed forever, they’re just needed for a while. When you need a short-term habit, having both a goal and a limit create a sustainable pace. It’s that sustainable pace that will help you reach your goals.

In the early 1900s, it was heady stuff to be an explorer. The chances of death were high; however, the bragging rights were impressive. To be the first man to set foot on the South Pole was a great spot to be in history. It means that your name would be remembered forever. There were two men who were up for the challenge.

The first was a rugged veteran of the cold climates: Robert Falcon Scott had already explored deeper into Antarctica than anyone had ever done before. He had set new records. However, he had a reputation for the kind of ego and bravado that you’d expect from someone who had done so much. He was more the hare than the tortoise as it came to exploring. (See the fable, The Tortoise and the Hare.)

The second explorer was a Norwegian by the name of Roald Amundsen. His preparations were focused towards reaching the North Pole until he learned that other explorers had already reached it. So, in a relatively last-minute move, he redirected his efforts towards the South Pole instead. Amundsen was more like the tortoise in the story. With no real reputation to protect, he preferred to make careful, consistent progress over short bursts with the necessary recovery times in between.

Amundsen was certainly in it for the glory, but he had an innate sense that even a victory would be hollow if he couldn’t make it back – or if he lost toes or fingers to frostbite. Risk-taking is an essential part of exploration, but the risks that Amundsen took were more measured. On days when he could have made more progress, he chose instead to use that time to renew and refresh the team. They rested so that the next day they could make their goal.

On January 17, 1912 Scott reached the South Pole. Unfortunately, he and his team failed to make it home. They died of starvation and cold on the return journey. They were also 34 days late to be considered the first humans at the South Pole. Amundsen and his team had been there and done that. Obviously, Scott’s party was found and in their journals it was discovered that they had made it – only to fail on their trek back home.

Certainly bad luck plays a part in who succeeded and who failed, but the idea of a sustainable pace has a powerful influence on who will – and who won’t – be successful.

When in junior high (or middle school) I was in physical education. We were supposed to run around the track a few times. I took off in an all-out sprint and maintained that for a few minutes. One of the more conditioned runners told me that I couldn’t sprint the entire race – that I should settle into a sustainable pace so that I’d be able to last the whole race. I didn’t heed the advice and ended up in the “second half” of the pack of runners at the end, but I never forgot the offhand comment.

I realized that most things in life – even those things that don’t require a long-term habit – aren’t something that you can sprint through. You can cram all night before the big test but you can’t cram for life. When you deprive yourself of sleep, you quite literally prevent your brain from converting your memories into long-term storage.

Software development has had a long history of lone heroes who write software over a weekend to meet an impossible deadline. It’s littered with burnt-out developers and frustrated organizations as their projects lurch forward at times and sputter and stop through long troughs of reduced productivity. As agile development approaches started becoming popular, one of the advanced topics for the leaders of the projects was how to develop the sustainable pace and how to keep the engine running relatively consistently.

Obesity has become a national epidemic – or so they say. Dieting has become big business and fad diets come and go. However, if you listen to the experts – who aren’t hawking a miracle pill or exercise video – you’ll hear that they suggest that you change your lifestyle. They recommend eating desserts – in small portions and sparingly – to keep your body from feeling starved, and more importantly to keep you from feeling that you’re depriving yourself.

Good diets are small changes in the way that you eat that, over time, create a large impact. Small changes are sustainable. Big, sweeping changes are like fad diets – just as likely to leave you in a worse spot than when you started.

When it’s something that you don’t want to do, it might seem easy to set the limit for the behavior, but strangely that’s not always the case. If you’ve got something nagging at you – like a cluttered home – there’s a tendency to try to “push through” decluttering. Certainly, there are times when this works. If you can put in an additional 10% or 20% than you’re comfortable with and you’re just done with it, the stretch to do the extra work may work in your favor.

However, what happens if you press on and you don’t get done? You get discouraged. In fact, it’s possible that you’ll even reach burnout. Burnout isn’t about being too busy, doing too much work, or being overwhelmed. Burnout is, at its core, the belief that nothing will ever change. Burnout is a form of learned helplessness. (Find more on learned helplessness in The Paradox of Choice.)

We arrive at burnout when we don’t set limits for ourselves because we have no yardstick to measure our progress; and we arrive at the end of a day, week, or month utterly exhausted because we’ve pushed ourselves as far as we can go. (More on in The Art of Learning.)

Flow is that highly productive state that we can get into where we’re super effective. While we don’t understand everything there is to know about the underpinnings of why flow works or how it works from a neurochemical perspective, we do know that it’s a desirable place to be. The Rise of Superman revealed that the gap between skills and challenge for maintaining flow is about 4%. When you get above 4% challenge, you end up falling out of flow.

Ideally, we want to set our limit high enough to trigger flow by creating that 4% gap between our current skills (or capacity) and what we set our goals to be (the challenge). So when setting our limits, we don’t want them to be so low that they’re boring and easy – nor should they be so ambitious that we exhaust ourselves.

Sometimes too much of a good thing can have its own long-term implications. We’ve all got what biologists call a “glucose imperative”. That is, we get a little shot of dopamine to reward us for things which are high in calories. It’s a holdover from a time when food was scarce and we needed a lot of glucose to feed our power-hungry brains. In today’s world, where we’ve largely solved the scarcity of food, the glucose imperative drives us to consume more calories than we should.

Health experts advise us to set a limit to the number of calories that we take in to prevent excessive weight and obesity. When we don’t set limits to our food intake, our weight typically creeps up over time. The limit, set at the right place, isn’t something that we can’t bend occasionally, like for a celebration where we can consume a few more calories in the form of a cake; but is instead a yardstick for us to ensure that we’re not burning ourselves out and that we’re staying in a highly productive state.

Without goals it is easy to get stuck in a view of the world that doing nothing is the right thing. It’s easy to think that the world is scary or that I might fail. Too often people without goals believe it’s too much work. It’s easy to do nothing, and in the long run get nothing done.

With the guard rails in place, habits can be formed. The goal prevents undershooting and doing nothing, while the limit prevents overshooting, exhaustion and burnout. These guard rails are like the gutter guards that they deploy for kids to learn bowling. In adult bowling, gutters on the sides of the lanes “eat” the ball if you get out of bounds. Kids with relatively poor aim would always end up in the gutter and have no fun. By deploying gutter guards, kids can just roll the ball down the alley and see what they get.

Forming a habit – whether short-term or long-term – is easier when you know what the boundaries are. If the habit is well-defined – through those boundaries – it becomes possible to form and maintain it for the time that’s necessary.

In my own world, my objective is to spend roughly an hour per day reading and writing. While this doesn’t always happen, it is a center point around which I try to base my day. I get up in the morning and write or read until 8AM, when I transition to my other work duties. When I get up early at 5 or 6 AM I can get more time in for writing. When I get up later I get less time. The goal I set of no less than 2 hours per week and no more than 10 hours per week have kept me able to enjoy reading and writing – and also to be productive.