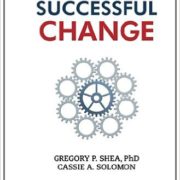 If somewhere between half and three quarters of all organizational change initiatives fail, why do we keep trying to do them? We do them because in today’s ever-changing world, we know that we don’t have any choice but to try to evolve our organizations. Sometimes those changes can be slow, evolutionary changes, and other times it’s necessary to do much faster, revolutionary changes.

If we have to do change, then how do we become more successful at it? This is the fundamental question that Leading Successful Change: 8 Keys to Making Change Work seeks to answer.

The fundamental premise of Leading Successful Change is that there are eight key “levers” that you can use to drive organizational change. Pulling one isn’t likely to cause change but changing four or more can increase your chances of success. Here are the eight levers:

In most organizations, there’s one or two levers that someone is comfortable with that they try to hang the entire cultural change process off of. Generally speaking, this isn’t enough to make the change work.

John Kotter may be the most recognized name in organizational change. His books Leading Change and The Heart of Change lay out his 8-step process for creating change in an organization. They revolve around urgency, coallation, communication, and execution. From my point of view, these revolve around the process component of leading change. It’s the structure about the steps that you go through. Leading Successful Change isn’t about the steps and structure as much as it’s about how you motivate people towards the change. While Kotter starts with the need for urgency and emphasizes the need for excellent communication, he deals very little with motivating individual employees.

I don’t view Leading Successful Change as a competitive model as much as I view it as a complementary one. It’s a model that takes a different perspective of the problem and tries to move things forward from a different lens.

Most folks view culture as something that has its own ethos – it is in and of itself something. However, culture is built on the foundation of the people and the environment, including the policies and the procedures that have been instituted in the organization and the “norms” that have developed. (See my post on Organizational Chemistry for more on this topic.)

Behavior is the connection between strategy and action. To change a culture, we have to change the behavior of individuals. To change the behavior of people, we have to either change them or their environment. The person’s behavior in turn influences the environment and creates a cyclical system of interaction – a recursive function. (See Fractal Along the Edges for a bit about recursive functions and Thinking in Systems for more on systems theory.)

Where Are We Going

There’s an interesting tension in leadership about defining the vision and strategy well enough that the organization can follow, and not so tightly that it makes it impossible for the people in the organization to buy into it as their own and adapt it to fit reality. This is the same tension I’ve encountered as a software development architect. You have to communicate the big picture and how things fit together – without all the detailed knowledge of how everything exactly works. You’re balancing the completeness of the vision (and the details provided) against the recognition that you don’t know everything.

On the one hand, given an infinite amount of time and resources, the leadership could fully articulate the change, complete with posters, diagrams, and beautifully written prose. On the other hand, that articulation probably wouldn’t work well with the organization as they would have felt that it was being forced on them from “on high.”

At the other end of the spectrum is the leadership team that says the flowery equivalent of “do more faster and better with less.” This isn’t a strategy. This isn’t leading change. This is simply stating operational excellence or continuous improvement. Without any form, the organization doesn’t know which direction to head, or can’t get a clear enough picture for people to identify with.

The trick about creating a vision for the change is to spell out some of the key behaviors and attitudes that the organization would like to see; and at the same time, leave some gaps into which the rest of the organization can breathe in the details – and be clear that they’re expected to add these details and not wait for someone else to figure them out.

Kurt Lewin described behavior as a function of both person and environment. It’s a recursive function, as people influence the environment. As a result, the behaviors of each party influences the environment, which influences their behavior. One way to think about this is that air pressure in a balloon makes it expand. It’s not the behavior of a single molecule of air that is causing the balloon to expand, but the sum total of all of the molecules bouncing around that keeps the balloon large.

All organizations are collections of people and are therefore sociotechnical systems. That is, organizations are systems which include people. There are policies and procedures which create structure and flow for the system. There are also the personal whims and concerns of the parties which makes the systems sometimes behave in some erratic or seemingly erratic ways.

The levers for leading successful change are not focused exclusively on either the systematic or personal components, but are instead diffused across the aspects of the sociotechnical system in an attempt to drive the change. I do strongly recommend Thinking in Systems for how best to move the systematic levers that Leading Successful Change recommends, because it has great coverage of how to make changes in a system.

Behaviors are the connection between strategy and action. One of the largest barriers for me in life is this character, “Do Nothing”. I can’t tell you know many times he’s gotten in the way of the things I want to do. He’s my chief competitor in business. My services are optional. If you want to improve your success you can hire me to help, but if you’re comfortable or complacent you certainly don’t have to.

One of the challenges of leading a change initiative is the possibility of Do Nothing creeping in and fouling things up. That’s why Kotter emphasized creating a sense of urgency. Strategies that are converted into tactics and even actions die because they’re not done. People are too busy doing real work or listening to Do Nothing to actually getting around to those things that lead to behaviors that drive action.

Organizations of all sizes are in a period of turmoil and transition, making effective change management more important than ever. With all the conflicting advice and change models out there, it can sometimes be hard[...]
Aug
10
Tue
8:00 am Extinguish Burnout: Practical Gu... @ IHCA/INCAL 2021
Extinguish Burnout: Practical Gu... @ IHCA/INCAL 2021
Aug 10 @ 8:00 am – 9:00 am

You’re constantly reminding, nudging, and nagging employees to do the things that you need them to do or stop doing things you need them to stop. You’re exhausted from the questions you’ve explained in your[...]
Sep
11
Sat
11:30 am Confident Change Management @ SHRM 2021 Annual Conference
Confident Change Management @ SHRM 2021 Annual Conference
Sep 11 @ 11:30 am – 12:30 pm