Book Review-Pitch Anything: An Innovative Method for Presenting, Persuading, and Winning the Deal 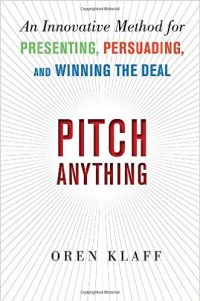 Book Review-Pitch Anything: An Innovative Method for Presenting, Persuading, and Winning the Deal

I’m not a fan of competition. Some folks are energized by it. Some folks live for that particular challenge. Not me. I want to go do something new. I want to climb a new hill. I don’t want to see if I can climb this particular hill faster than someone else. When a friend recommended that I read Pitch Anything: An Innovative Method for Presenting, Persuading, and Winning the Deal, I didn’t realize how much I was going to be confronted by my desire to not be in competition with others. (You can see Who Am I? for more on different value systems that people hold.)

Whether I’m a fan of competition or not, it comes at me from time to time. I wouldn’t say that I avoid it. It’s more accurate to say that I don’t pursue it. Because I’m not avoiding it: I do find that there are times when I’m face-to-face with a competitive situation, where I need to prepare a pitch that presents the things that I’ve done in a way that makes sense to the prospect. Ultimately, that’s what pitching is all about.

Did you know that economics isn’t the study of money? It’s the study of how people react to money. (I first talked about this in my review of Drive.) Oren Klaff describes his perspective in Pitch Anything as Neuro-finance. That is, it’s highly influenced by the way that people think – and how they think about money.

He speaks of the “croc” brain and the amygdala, and how it filters what we get to evaluate through our “primate” brain. Khaneman called these System 1 and System 2 in Thinking, Fast and Slow. The key point of Klaff’s discussion is that everything that we process in our executive function, primate, system 2 brain is filtered – and altered – by our amygdala, croc, System 1 brain. (You may want to see The Heretic’s Guide to Management for more detail on these concepts and further refinement of system 2.)

The idea is that we often deliver pitches that never make it past the croc brain. Said differently, our reticular activating system (RAS) regulates our level of attention and our sleep-awake cycle. (See Change or Die for more about RAS.) Basically, the croc brain gets the opportunity to decide how much attention we pay. I often tell folks that they probably don’t remember which lights were red when they drove home last – but they probably do remember the last time they saw the red flashing lights of a fire truck. This is due in part to the novelty that triggers the RAS to signal that greater “awakeness” is required.

Because of some neurological shortcuts, the amygdala gets signals before the rest of the consciousness, so it quite literally gets to make decisions about what to do with information prior to executive function involvement. (See The Inner Game of Dialogue post spawned by my reading of Dialogue.) Add to that the lies that our croc brain feeds our primate brain, and you’ve got behaviors which are driven by delusions. (See Incognito for more about how our brains fool us.)

We’ll look at these in detail in a moment. However, he then lays out a proposed template for how a pitch should go – which he believes should be no more than 20 minutes due to attention span issues. The template he suggests is:

A frame is a point of view or a structure for an interaction. It’s all our perspective. Our frame structures the way that we think. Klaff is, however, most frequently speaking of psychological triggers. (See Fascinate for more on psychological triggers.) While I agree that these triggers are powerful, I don’t know that I’d label them as “frames” since, with the exception of the first two examples, they aren’t really structural in nature.

Klaff makes the point that frames don’t merge or coexist. They conflict and one overtakes another. That is, one frame will overpower a weaker frame. Obviously, the ability to create a solid frame gives the frame power – but you can also break a frame by disrupting it.

Nancy Dwarte made a passionate argument for storytelling in Slide:ology – and in her book Resonate, which I’ve not yet reviewed. Klaff sees the power of storytelling as well, and recommends that folks consider how they tell the story of what they’re pitching more than just focusing on the numbers and details of the deal. It turns out that we’ve evolved to learn from and feel emotionally connected to stories. So while data is nice, it doesn’t have an emotional component to it – and may not engage the targeted person because it’s not sufficiently interesting. (See The Happiness Hypothesis for the Rider-Elephant-Path model and the implications for the need to engage people emotionally.)

We want to know the ending of the stories that we listen to. The most annoying movies that you’ve watched have left loose ends that they didn’t tie up. You didn’t get the end of the story – and because the movie ended, you know you won’t get the answer unless you’re willing to watch the sequel. The trick in intrigue is to explain the story only up to a point. Get the person to the edge of the jungle, but not out of it.

Comedy taught me the beautiful art of misdirection. The trick is to allow someone to form their own bad conclusion – or leap to conclusions – without them feeling like they have been intentionally misled. Done correctly, it inspires humor. (See Inside Jokes for more.)

Obviously at some point you have to get to the meat of the deal and present the “give-get” in the situation. What is it you’re looking for out of the buyer, and what will they get in return? Klaff recommends that you follow this with emotional stacking – placing frames one after the other on the emotions of the buyer – to move them towards a decision.

One of the challenges with Pitch Anything for a guy that’s not pitching million dollar deals is how the approach applies to me and what I’m doing. My perspective is that it both does and doesn’t apply. In most cases, I don’t have to pitch hard. I’m there to help the customer if they want it. I’m also fine walking away from the deal if the buyer doesn’t need – or doesn’t value – the service that I provide.

I rarely pitch against other folks. When I do, the outcomes are typically pre-decided. Either they’ve already bought into the experience and insight I bring, or they’re asking me to pitch because they’ve already made up their mind and are fulfilling a set of requirements to get other bids. So in most cases, when I’m pitching I’m not competing with anyone. I’m competing against “Do Nothing”.

However, the core of the approach is knowing how people respond when you present them with any information, and that I have to do all the time. So while I can’t directly use the advice to pitch, I’ve learned how to Pitch Anything – even when it’s not a pitch.