Blog
You are here: Home1 / Blog2 / Professional3 / Video4 / After Effects: Clocks and Countdown

I’ve had Adobe Creative Suite for a long time now. Though my primary video editor is Sony Vegas (now MAGIX Vegas Pro) I’ve had Premiere and I’ve used it in the past. I’ve just found that the workflow wasn’t as fast as in Vegas. Because I use Vegas Pro as my primary editor, I hadn’t spent much time with After Effects. For most things, I didn’t need to use After Effects so I didn’t need to learn it. However, After Effects does two things. First, it allows you to animate scenes. Second, through expressions, it allows you to programmatically control the animation.

This allowed me to address two needs that I had in very rapid succession: a stopwatch, and a countdown timer.

A watch or stopwatch has a very consistent motion. The second-hand sweeps around with a predictable rotation. You can create an animated stopwatch by taking a second hand and manipulating its rotation over time. Putting this together in After Effects wasn’t particularly hard, as there are several demonstrations on the Internet. However, there are a few challenges with the demos – not the least of which is that many of them are clocks and not stopwatches. Given I wanted to show 30 seconds elapsing, I needed a stopwatch.

Most of the stock photography and illustrations I buy I get from BigStockPhoto.com because it’s relatively inexpensive and they’ve got good content. I found a good-looking stopwatch and purchased a vector version of it. There are two reasons for the vector version. First, it’s scalable so I can get to whatever resolution I’d like. Second, it made it easy to break apart for my video.

The watch is great but there were a few things about it that needed tweaking. There were glass effects that look great for a static image, but could be distracting when I scaled it down and placed it in motion. So, I took the scalable EPS and opened it in Illustrator. I removed the layers of effects I didn’t need and saved a new file.

I also needed to separate out the second hand and minute hand from the stopwatch so I could animate them individually. So, I ultimately ended up with three EPS files: one for the second hand, one for the minute hand, and one for the rest of the stopwatch. I could have saved them into a raster format instead of a vector format, but keeping them as vectors meant that After Effects could render them instead of interpolate them – making for a better final product.

I brought in each of the image pieces and converted them to outlines in After Effects then deleted the original EPS files. This gave me versions without a background and something native to After Effects.

I scaled the stopwatch face to full size. I then used expressions to set the scale of the second and minute hands to the same as the face. That way, if I went in later to adjust sizes, the hands would adjust proportionally. This was as simple as pressing Alt while clicking the stopwatch next to scale and then dragging the expression pick whip (little spiral) to the scale of the watch face.

The hardest part of the work was centering the hands and then setting the anchor point – which is the center around which the item rotates. This isn’t as simple as it seems, because the second hand and the minute hand don’t rotate around an edge. After a bit of trial and error, I found good anchor points on both. 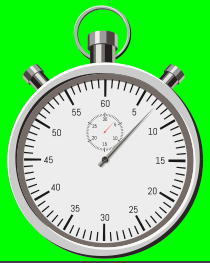 Rendering the minute hand used a similar process, except the minute hand was smaller and was rendered in black in the original photo. Because I had converted it to outlines, I was able to change the color to red so that, even though it was smaller, it would stand out a bit against the rest of the illustration. That was just a matter of adjusting color on each of the contents of the outline. Then I added an expression to the minute hand which read:

What is happening is it’s taking the second hand rotation and dividing by 30. This is because the minute hand clock only goes to 30, not 60 – so twice the rotation per increment as the second hand and 1/60th because it’s one tick per minute. Thus /60*2 – or /30. The + value allows me to set the initial rotation of the minute hand to rotate it into the zero position.

With the stopwatch animating correctly, I needed to take care of a few things. Since I wasn’t going to use the video individually, I needed to get to a transparent background. Technically, it’s possible to render transparency, but the file formats for this are ugly. I elected to set my background color for the composition to pure green – since there’s no green in the stopwatch – and use chromakeying on the Vegas side to drop out the background. This meant I could use a .MP4 format and keep things small and simple. The resulting watch is very smooth and super clean.

The approach used for the stopwatch is fine – except it doesn’t lend itself to a countdown very well. Even with the minute hand rendered in red, it’s easy to miss. What I wanted was a countdown that would change text so that it shows the remaining minutes and seconds. Finding a demonstration that showed how to do this was impossible. I assume this is because designers don’t want to learn development and very few developers are interested in doing graphics or video. So, while the solution turns out to be very simple and elegant, it required a bit of thinking from both camps.

The starting point for this project was to place a text element on the page and expand the source text including expressions. This allowed me to write a bit of code to output the countdown I wanted. To do this, I knew I needed two input variables. First, I needed to know how long the composition is – so I could know where I needed to be at zero. Second, I needed to know where we were in the rendering process. Luckily, these variables are available to us. We can get the total duration of the composition with thisComp.duration. We can get where we are in the composition with time. I could, from that, calculate the time remaining.

The next challenge is getting the output to look right. The time remaining was floating point because both source values are floating point and I needed integers. So I used Math.floor() to get integers of the minutes and seconds remaining.

The next bit is building this into a string. I started by adding the minutes to the string, a colon and then, if the seconds were less than 10, adding a leading zero, and finally the number of seconds.

To call this from After Effects I had to put the bulk of the code in a function and then call that function. The result is this code (which you can use):

With that out of the way I could position the text, set the font, color, etc. Wherever I went in the timeline, I’d get the right remaining values. The one key to the text was to select a monospace font. Without this, the text moved on the screen when the width of the numbers changed. This was distracting. I elected to use the free font Digital-7 in my composition so I could make it look like an old digital clock.

I could have caused this to render on a background scene of a bedroom where there was a digital clock, but for my purposes, I needed to have a different look, so I just overlaid the font on my background image.

This project – because it doesn’t contain any licensed images – I can provide. You’ll find it in a ZIP file here. By changing the composition length, you can change the length of the countdown, so this should be suitable whether you need a 1-minute countdown or a 20-minute countdown. I do ask that if you find this valuable, you drop me an email and let me know.

Book Review-The Excellence Habit: How Small Changes in Our Mindset Can Make...