Blog
You are here: Home1 / Blog2 / Professional3 / Psychology4 / The Largest Gap in the World – Between Saying and Doing 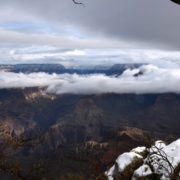 The largest gap on the planet Earth isn’t the Mariana Trench or the Grand Canyon. The largest gap is between saying and doing. The largest gap exists between what people say they do and what they actually do. They say that the road to hell is paved with good intentions. We intend to do what we say, but sometimes we don’t. Some of us more than others tolerate the gap between doing what we say we will do – and actually doing it. If you want to close the gap, or at least understand it better, you have to understand why saying is easy and doing is hard.

Despite the substantial effort that goes into the art of speaking with others, it’s relatively easy. Within our first few years of life, most of us have a reasonable command of the language that our parents speak. (For me, this was English.) While English classes continued through high school, these were really not English classes as much as they were teaching me the appreciation of literature and improving my ability to express myself.

School and life prepare us for verbally communicating our beliefs and desires. We learn how to speak, and eventually we find the process relatively easy. With work, we can even have Crucial Conversations with relative ease.

There’s a saying that people might “talk the talk, but can they walk the walk?” Why is that? The answer is that it’s easy to say that you’re going to skip dessert but harder to do it. After all, we are driven by the glucose imperative. (See Habits – Goals and Limits for more on the glucose imperative.) What can be said in a few words may be very difficult to do. Consider President Kennedy’s address to Congress, where he outlined the objective of transporting man to the moon and returning him safely home. He literally said, “I believe that this nation should commit itself to achieving the goal, before this decade is out, of landing a man on the moon and returning him safely to earth.” The cost was $25.4 billion in the dozen years that followed his speech. The words took Kennedy approximately 11 seconds to say.

It’s nothing to say that one will get a college degree but, as many students will attest while studying and trudging through the cold weather, it’s easier said than done. It’s not the big things that are harder to do than they are to say. Everything, from the simple “I’ll make dinner” to “I’ll take out the trash,” is easier to say than to do.

Should Say, Can’t Do

Many times our prognostications about what we will do in the future aren’t based on what we want or believe but instead on what we believe we “should” do. Whether this is based on societal expectations or expectations of our friends and family, these “shoulds” separate us from what we genuinely want to do. Instead, they cause us to make commitments that aren’t aligned with our true desires.

The problem is that when the time comes to actually do the “should” instead of just say it, our inner conflict kicks in and there are always other more pressing things that need to happen instead of the “should.”

Many of us have a need to portray ourselves as someone other than who we really are. Somewhere along the line, right or wrong, we’ve discovered that we should be someone else, because people don’t like the person that we are. We’ve heard that we’re not good enough. (See Daring Greatly for more on being enough.) We’ve heard criticism about one of the characteristics of our personality that defines us and gives us strength but is also at the heart of our weakness – and we decided to change.

This attempt to be someone else – someone more likable or prettier or more sensitive or whatever – causes us to deny our true selves and hold ourselves out to be someone else. We are the shiny, stained glass people that show no blemishes; but in doing this, we’ve made it harder to connect what we say and what we do. (See How to Be Yourself for more about being someone else.)

You know those times when you know you really need to do something. Maybe it’s your taxes. There’s no escaping the task needing to be done, and yet you take the day that you were going to work on taxes and suddenly decide to reorganize your collection of belly button lint? Out of the blue, the tasks that you least like – besides taxes – seem to be the ones that you want to get done.

You’re experiencing the inner conflict of cognitive dissonance. You know what you need to do, but dislike it enough that you’re electing to do other painful – but still less painful – tasks in order to avoid the thing you don’t want to do. That’s cognitive dissonance. That’s you trying to avoid doing what you know needs to be done. I once organized my collection of CDs – a somewhat extensive collection – to avoid doing another task – one that I don’t even remember at this point.

With cognitive dissonance, we recognize that we’re not of one mind but of two. Whether you like the System 1/System 2 perspective of Thinking, Fast and Slow, or you’re partial to Johnathan Haidt’s model of the rider, elephant, and path, we are not of a single mind. (See The Happiness Hypothesis for more on the rider, elephant, path model.) The difference between the rational rider’s (System 2) perspective on the “should” and the elephant’s (System 1) experience creates some of the gap between saying and doing.

The elephant, with trumpets blaring, may declare what you’re going to do – what you’re going to make happen. Later, when the elephant is calm and the rider is trying to save face, the weight of the statement that was made emotionally may come to full awareness. The internal voice asks, “Why did I say I would do that?”

On a few occasions I’ve written about the curse of “commitment cancer”. This is the downward spiral where people make but fail to meet their commitments to one another (see Running Users Groups and The Heretic’s Guide to Best Practices). The problem with missing a
commitment isn’t the single commitment that’s missed, it’s the chain reaction of missed commitments that creates the challenge.

The end game of the kind of commitment cancer that spreads and infects the organization is no organization at all.

I’ve listed just some of the many reasons why people make commitments that they don’t keep and have highlighted the end result of too many missed commitments. But I’ve not really directly addressed what to do to change the importance of meeting commitments and the ease at which that is done.

A good start is accepting Pacta sunt servanda (Latin for “agreements must be kept”) as a fundamental truth. If you don’t believe that it’s important for agreements to be kept – for commitments to be kept – then there’s little hope in change. If, in the back of your head, there’s the nagging voice, or there’s the devil on your shoulder saying, “but there are exceptions”, you may not fully appreciate the need to keep your agreements/commitments. I’m not saying there aren’t exceptions and barriers and difficulties. I’m saying that your first position should be that part of making the commitment is recognizing that the exceptions exist, and it’s up to you to figure out how to deal with them.

Next, remember the words of Shakespeare “to thine own self be true.” If you’re struggling to be your true authentic person, you’ll never have the willpower (see Willpower) to keep your commitments. Likewise, if you’re failing to accept others for who they are, you make it difficult for them to be themselves and therefore keep their commitments. (See How to Be an Adult in Relationships for more on accepting and allowing others to be who they need to be.)