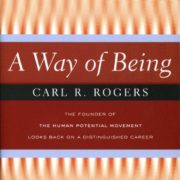 I started 2017 off with my review of Motivational Interviewing, which serves as a structure for how to communicate with those who are struggling to help them be more successful. It’s foundationally based on active listening, which is attributed to Thomas Gordon in Parent Effectiveness Training. The other foundation of motivational interviewing is the work of Carl Rogers, so I decided to look into A Way of Being, one of his final works. It wasn’t a single-threaded thought expressed across the pages of a book. Instead it was a collection of essays, presentations, and papers that together form a sense for this great psychologist who urged us to listen and truly hear people as they speak.

I have both a deep respect for psychology and an uneasiness about how it’s been used over the years. I’ve seen, through the works of others and personally, how it can be misused. (See House of Cards, The Cult of Psychology Testing, and Science and Pseudoscience in Clinical Psychology for some of the underbelly of this profession.) Rogers was present at the formation of psychology as a profession. He was the president of the American Psychological Association in 1947 and was also aware of the problems with creating any profession.

Rogers acknowledged that credentials didn’t completely separate the good psychologists from the bad ones – or those who shouldn’t be licensed. He recognized that non-credentialed laypersons were doing more good than some of the credentialed psychologists of his day. He also acknowledged that the key challenge with codifying something into a profession is the fact that in doing so you necessarily retard the growth of the practice of the profession. Credentialing relies upon agreement on the skills and beliefs that a credentialed person should have, and that necessarily must lag the exploration at the edges of the profession.

However, the perspective is one of awareness, as he could see the mind-expanding properties of education and the mind-shrinking properties of traditional therapy. Education expanded the boundaries of the mind, where therapy typically shrank the number of options.

It was in the 1970s when Gordon wrote Parent Effectiveness Training and spoke of active listening. As radical as this was for its time, Rogers had been gradually refining an approach of person-centered therapy, where listening to what the client was really saying was core. He had realized that when someone was in a crisis what they often needed most was for someone to understand them. They needed someone to connect with them through language and words. They needed to be heard.

In person-centered therapy, you intentionally connect with someone to understand their world without accepting it as your own. By allowing the other person to have their opinions without trying to persuade them of something different, you both recognize where they are as well as accept that their answer is not the only answer. (See How to Be an Adult in Relationships for more on allowing.) There is both acceptance of the other person and boundaries between their reality and your reality. (See Boundaries for more on boundaries, and Choice Theory for more on inner world realities.) Rogers deeply believed in the right for others to have their views – even if they contradicted his own.

One of the comments that caught my attention was, “In my younger years, although I was not a hero-worshiper, I definitely looked up to a number of men whom I felt were ‘real psychologists,’ whereas I existed on a poorly accepted fringe.” I think the reason this comment was so interesting was because I believe that we all have experienced this belief that we’re on the outside, or that we’re not doing the “real work” of the profession. It’s refreshing to know that some of the men who defined their professions have felt like they too were on the outside once.

It’s comforting that everyone feels like they’re on the outside looking in at what others are doing, which seems to be more impactful or more relevant to the profession. For me, it was learning to do software development and considering those professionals creating compilers and new languages. I felt like I didn’t understand. Later in my career, it was those folks who were doing agile development or learning patterns before I had time to learn and use these techniques.

As I spent more time in the industry, I realized that there is an ugliness that doesn’t show from the outside. I’ve seen how projects that were trumpeted as winners never accomplished their goals. However, the press coverage was good.

Wanting but Not Expecting

Rogers continues later: “Writing is my way of communicating with a world to which, in a very real sense, I feel I do not quite belong. I wish very much to be understood, but I don’t expect to be,” after relating that psychologists aren’t interested in new ideas – in ideas that challenge the status quo. It’s easier to accept that we have the answers rather than question whether we do or don’t.

Inherent in people – including Rogers, you, and I – is that we want to be understood. As the father of person-centered therapy, he knew this completely. He desired to be fully understood and at some level knew, because of his intelligence and his different view of the world, that he wouldn’t be. He chose to write his ideas, to give him time to optimize their clarity and to articulate the dimensions of his thoughts.

However, no matter how much he crafted his prose, he never expected to be fully understood. He longed for people of his era to understand his message and simultaneously didn’t expect that this was possible. At some level, this feels like a lonely place. He’s the misunderstood artist. He’s the genius that no one gets.

The people that I respect the most are people who feel a bit like misfits. They have a message burning inside of them, but they feel as if they may not be able to get the message through to a world that needs it. I feel this way at times. I identify with the thought that there are parts of my experience that are difficult, if not impossible, to relate to others.

We Have a Choice

The debates of Roger’s day reverberated through social consciousness and are still felt today. Skinner and some of his colleagues believed that man has no choices, that humans are a result of their genetics and environments, and therefore don’t have the choice in how they act. Everything is preprogrammed and running like a large clock down until the end. This, however, denies free will and the ability for us to make our own choices and alter the course of our lives. If you’re driven by the desire to help people, thinking that you’re helpless to influence your goal isn’t motivating.

The repercussions of the disagreement between Skinner and Rogers can be felt today. Dweck had to study and write about the idea of a fixed vs. a growth mindset. (See Mindset for more.) We read of the different ways that people see time in The Time Paradox. Depending upon your frame of reference, we’re either prisoners traveling in the train of time, or we’re conductors of the train guiding our own destinies. Glasser struggles for acceptance of his Choice Theory because we’re so caught up in controlling others by controlling their experiences.

Ultimately, the growth of Motivational Interviewing and other techniques that can be helpful to others are proof that we do have a choice in how we act and react. I suppose the counter-argument is that it’s hard, as evidenced by John Kotter’s often-quoted responses about most organizational change initiatives failing.

Maslow wasn’t wrong when he expressed his hierarchy of needs, but he wasn’t entirely right either. We all have basic needs that we need met. We start with physiological needs like air, water, and food, and move up the hierarchy to self-actualization. Where he wasn’t quite right is that we don’t work on the lower level to the exclusion of the higher level. He said that we work on it to sufficiency before proceeding, but that misses the fundamental element of time. We satiate or quench our desires, but we never fully put them out.

When hunger rears its head, it can block or delay higher pursuits; but sometimes we can delay our hunger to obtain our higher-level goals. We quench our thirst for water for a while. It takes mental energy to pursue higher goals while our lower needs are not fully met, while at the same time we know that our lower-level needs may never be completely met.

Entropy says that the universe is a clock that is slowly winding down. The complex order of things is being disrupted by the continual decline and deterioration of things. However, on the opposite side of the fence, we know that stars convert less complex atoms into more complex – or at least heavier – atoms. We know that there are forces that are converting single-celled organisms into multi-celled organisms. There is generation as well as degeneration happening at the same time.

Bohm (see On Dialogue) described the growth of a tree from an acorn as the emergence of the tree through the aperture of the acorn. It would be silly to say that the tree was inside the acorn. The tree is much more voluminous and has a much higher mass. However, when considered as the opening through which the tree emerges, one can see that the tree isn’t inside the acorn – but the acorn is the way the tree comes into being.

The constant ebb and flow of generation and deterioration means that there is change. People can and do change. They have the capacity to tear down old patterns of behavior and create new ones where the old ones were, like a forest that sprouts up new life where a fire has occurred.

The Demands on the Therapist

Another one of Roger’s quotes that is intriguing is, “As I have considered this evidence and also my own experience in the training of therapists, I come to the somewhat uncomfortable conclusion that the more psychologically mature and integrated the therapist is, the more helpful is the relationship that he or she provides. This puts a heavy demand on the therapist as a person.” In other words, one has to be very centered and mentally healthy themselves to withstand the buffeting by those that they seek to support. They must be open to the inner turmoil that exists in the worlds of their patients while not losing themselves.

I often think about the scene from The Matrix where Nero no longer dodges the bullets. He stops them, investigates one, then drops it. This is powerful. The ability to see the “slings and arrows” fired your way while not reacting to them is something Buddhists train extensively for.

While neither you nor I are likely to be therapists, A Way of Being can help us understand what it is like to be a fellow, supportive human being.