The Making of The SharePoint Shepherd’s Guide for End Users: 2016 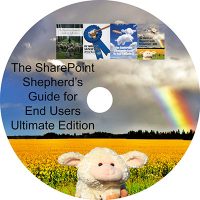 The Making of The SharePoint Shepherd’s Guide for End Users: 2016

A few weeks ago, we launched the 2016 version of the SharePoint Shepherd’s Guide for End Users. This is our fourth build of the productivity aid and book since its 2007 release. Updating and delivering the content is something we know how to do. Our big achievement for this release wasn’t in the content – though it continues to get better – the big advancements this time was transforming the way the content looked when it was deployed to SharePoint.

We often spoke of the corporate edition by calling it the “wiki” edition. That was because the corporate edition deployed as a wiki library in the client’s SharePoint. This was convenient, because it allowed users to be able to modify the pages on their own. It also meant that we could sell the Shepherd’s Guide to users with Windows SharePoint Services or SharePoint Foundation and they would be able to use it because wiki libraries were available in every version of SharePoint.

However, times have changed. Microsoft is no longer offering a SharePoint Foundation version, and therefore every customer for SharePoint 2016 will have at least SharePoint Server Standard, which includes publishing pages. For us, this was great, primarily because it allowed us to solve some formatting problems that had plagued the content due to the nature of the wiki’s HTML processing (or mangling) engine.

If you read the book you saw that we had full-color highlights in the text to indicate which things you were supposed to click on. When we generated the HTML for the wiki, these were stripped by the HTML engine. We lived without these highlights that we had painstakingly put into the content because there wasn’t a solution. However, with the 2016 version and the migration to publishing pages, we could get them back in the corporate edition.

The use of the publishing feature allows us to structure the content better and improves some other handling, but the big value of this move is in how we allow you to customize your content.

One of the hallmarks of the SharePoint Shepherd solution since its initial release has been the ability to customize the content. You can customize what we provide as well as adding new content of your own. None of the other help solutions for SharePoint allow you to do this. It’s been one of the things that customers have repeatedly told us was essential to their needs. They were using the Shepherd’s Guide to get a head start on their support for their users, and customizing was a big deal.

Historically, we’ve not needed to do many updates to the content once it was released. Microsoft started changing this in SharePoint 2013 when they changed SkyDrive to OneDrive post-release. The changes for SharePoint 2016 are anticipated to include the new modern UI. That meant we had to plan for situations where we were updating content and users were updating the same content. We needed an elegant way to manage updates in a more fluid way.

The switch to publishing allows us to do this. We track the version of the content we deploy. If the user changes the content, we detect this and we don’t overwrite their content. Instead, we post a non-major version of the content into the library. The impact of this is that editors can look for items which aren’t published as major versions to evaluate the content that we have updates for and decide whether to keep their changes our ours. It also means that the standard tools in SharePoint work to help you identify changes in the content.

In doing this we’ve delivered a way for you to both receive updates and to customize your content at the same time.

While listening to customers, we began to hear about organizations that were struggling with multiple versions of SharePoint. They had everything from SharePoint 2007 through Office 365 and the support staff was struggling to provide answers on how to do things no matter what the version of SharePoint. So, we added support for multiple versions of the Shepherd’s Guide content – including the ability to instantly shift from one version of the content to another – from every page.

While we still sell the Shepherd’s Guide by version as a one-time purchase, we’ve added a new way to get the guide. The Ultimate Guide includes every version of the guide we’ve published, including updates. As Office 365 continues to evolve, we’ll publish updates and provide them as a part of The SharePoint Shepherd’s Ultimate Guide for End Users. This subscription-based offering will allow you to have all the end user support content you need for your users no matter what version they’ve been on – or will be on.

The ultimate solution allows you to create your own content, edit ours, and stay up to date all at the same time. There’s no reason to build your own support content for SharePoint. We’ve got that covered.

Look at what we’re doing with the ultimate guide on the SharePoint Shepherd site at www.SharePointShepherd.com/Ultimate.

PrevPreviousOneDrive Sync to a SharePoint Library with a Required Field
NextBook Review-Coachbook: A Guide to Organizational Coaching Strategies and PracticesNext