Blog
You are here: Home1 / Blog2 / Personal3 / Parenting4 / Book Review-The Gift of Failure: How the Best Parents Learn to Let Go So... 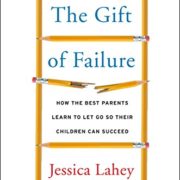 We believe we understand motivation. We’ve seen Maslow’s hierarchy of needs. We’ve learned about carrots and sticks – or rewards and punishments. We’ve heard about how huge bonuses have motivated people to work under insane conditions to crush a goal and win the day. The problem is that much of what we know about motivation is just wrong. It does work – to a point – for those people whose lives are filled with meaningless repetitive tasks. It doesn’t work with what Richard Florida calls “the creative class” of workers. These are workers whose jobs are non-routine. They require heuristics and creativity to work. (Richard Florida is quoted in Theory U.)

Much of this awareness of how motivation does and doesn’t work was covered in Drive, which The Gift of Failure references. The more that we provide external motivators, the more that we destroy any internal, intrinsic drive that was in the person. It’s not that external motivation doesn’t work long-term, it’s that it breaks the engine for long-term motivation for the kinds of situations that we are facing in the world today.

Ericsson explained in Peak that it takes purposeful practice to become the top of our game in any chosen arena. Flow is the vehicle through which we can achieve peak performance and that comes through the balance of our skills and the challenges at hand. (See The Rise of Superman, Flow, and Finding Flow for more.) If we’re not willing to stretch a little (4%) to become a bit better, we never will. The major roadblock on the road to success in life is the fear of failure.

The real reason that we fear failure is because we confuse failing at something and failure as a person. We have somehow attached a performance-based view of love and our value to our lives and can’t afford to take the risk of failing at something because we might be labeled a failure. (See The Road Less Traveled for more on performance-based love.) So pervasive is this illusion that the book we’re discussing is titled The Gift of Failure – not The Gift of “Failing”.

This is not to say that we should praise them even when they don’t do anything valuable. Rather, it’s saying that love is unconditional. They’ll be supported. As Dweck points out in Mindset we shouldn’t be constantly praising them – particularly for innate abilities. We should praise them for their hard work and celebrate their failures as much as their successes.

A Brief History of Childhood

It’s impossible for us to fully understand childhood and parenting as it was a hundred years or more ago. We, incorrectly, assume that the views on children and parenting have been stable; however, nothing could be further from the truth. Even with echoes of sayings like, “children should be seen and not heard,” we can’t quite believe that the way we’re trying to raise our children today isn’t the same as it used to be. Even with our parents quietly voicing their concerns with the hectic schedules that we keep for our kids, including their extracurricular activities and all the work towards college preparation, we somehow don’t believe that childhood and parenting were different.

It’s hard to remember that, in early colonial times, parents could expect to lose one of ten children, and that in many places the mortality rate was many times that. It’s hard to imagine that outbreaks of smallpox could wipe out 20% of the population in a few short years. The focus wasn’t on emotional well-being, competing for the top rung schools or jobs. This was a fight for literal survival.

As things progressed, the need for focus on survival faded, and names of children began to diverge from being names from their family, including aunts and uncles but mostly moms and dads and grandparents. Parent mortality was still high and one of your two parents – perhaps the one you were named after – would be gone by the time a child was of marriable age.

Children were working, too. One-sixth of the children between ten and fifteen were employed. Children were useful because they could squeeze into tight places that adults could not. Gradually, we shifted the laws to prevent child labor and created laws to require childhood education. We swung from expendable tools to help the family survive to children who could lift themselves up and perhaps reach back to help their family if they made it.

As we moved into the 1940s, the change in parenting “rules” prompted several books on how to parent. Instead of parenting being a thing that just happened, it became something that you needed coaching and professionals to help you with. Dr. Benjamin Spock’s book, Baby and Child Care, became a roaring success, and everyone wanted to follow his leadership on how to raise safe, well-adjusted children. He stated, “We need idealistic children.” His style was very permissive. The style was sometimes labeled as neglectful.

His advice spawned a whole generation of individualistic children who didn’t learn the same lessons of working for the common good that their parents had learned. (See America’s Generations for generational differences.) Later in his life he expressed some regret for not providing more guidance towards working together for the common good. (This is recorded in Finding Flow.)

Through Spock’s advice, the balance of power changed. Instead of the parents being the authority to be respected, they became the servants for their children. Instead of children recognizing that they are alive only because their parents decided to create them – and therefore there should be some reverence – they became ways for parents to relive their lives and potentially relive it in a different way. If only they could get their children to accept that the parents’ view of life was the right one.

The psychological condition of enmeshment is when a person can’t see where they end and another person begins. This is particularly common with parents who struggle to maintain appropriate boundaries between themselves and their children. With parents restructuring their lives in the service of their children, it’s little wonder why they might need to feel some greater sense of ownership – not just responsibility – for the outcomes that the children are achieving.

When Johnny wins the 400-meter dash, Dad can feel proud not just of Johnny but of himself. When Suzi becomes the county fair pageant queen, mom can finally feel vindicated at her loss from twenty-some years prior, when she lost to someone who has become an archrival (at least in her head). Instead of the sense of pride that their children are succeeding, they personally feel like they’re succeeding.

In Emotional Awareness, the Dalai Lama speaks of how Buddhists regard pride as a negative (or afflictive) emotion, but makes a distinction that there is a pride in others that is non-afflictive. He makes mention that Yiddish is the only language he is aware of that has a word – naches – that distinguishes the feeling of pride for someone else without personal attachment. This is, per the Dalai Lama, a good thing. Of course, the Christian tradition regards pride as the original and most serious of the seven deadly sins.

The problem is that when you’re living your life partially or totally enmeshed the boundaries between you and your children don’t exist. You look at each thing that the child does as something that you’ve done, and instead of being proud of what someone else has accomplished, you are proud of yourself. Instead of feeling warm-heartedness for them, you find some level of external validation that you’re a good mom or dad – and that you’re a good person, all at the same time.

One of the phrases from the serenity prayer is “Taking this world as it is, not as I would have it.” That is the heart of living life on life’s terms. We can’t change the circumstances of our world. We can’t prevent the fact that we’ll all fail – and yet not be failures. We cannot deny the essential realities of life without diminishing our lives. We must live life on life’s terms – not ours – if we want to be happy.

Failure is Always an Option

When Dr. Glaser wrote Schools Without Failure, he wasn’t saying that no one should fail. He was trying to prevent the systematic disengagement of students through external labeling and a fixed mindset. He wasn’t saying that children couldn’t and shouldn’t fail. He was saying that students shouldn’t be labeled as failures. He was encouraging us to find more delicate ways of allowing children to fail. The end result was the development of grit. (See Grit for more.)

Holding kids accountable is no fun. It’s no fun to have to be the “bad guy” (or girl) and keep the kids from electronics or a game or something else. It’s not fun to apply the consequences that were clearly communicated when they’ve stepped outside of the lines. The Gift of Failure admits that kids don’t always build the closest bonds with parents who are “strict” and hold kids accountable, but at the same time acknowledges that some of the best parents are those who find a way to be strict and loving at the same time.

In The Gifts of Imperfection, Brené Brown says, “I believe that understanding the connection between boundaries, accountability, acceptance, and compassion has made me a kinder person.” She goes on to say that her mind was blown when she realized that the most boundary-conscious people that she met were the most compassionate. In short, the way to cultivate compassion is to recognize where the boundaries are. The better parents understand how to hold their children accountable while maintaining acceptance of them. (See How to Be an Adult in Relationships for more on acceptance.)

Heading out on a journey to find failure may seem like a bad plan. After all, failure will find you. However, setting your course towards failure means that you’re striving, trying, working, challenging yourself, and ultimately developing intrinsic motivation. By setting your course towards failure, you can ensure that you won’t ignore it, minimize it, or give it more credence that it’s worth. Failure is truly a gift, because it allows you to grow, so long as you don’t believe that you’re a failure because you have failed. If you’re still looking for a way to walk through the nuance of failing without being a failure, perhaps you need The Gift of Failure.