Blog
You are here: Home1 / Blog2 / Personal3 / How 3D Printing is Changing My World 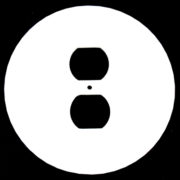 At the risk of being redundant, 3D printing is transforming the world. Note that I expressed this in the present tense. It is changing the world today – not tomorrow, and not some day in the future, today. It’s changing how people solve problems in what may seem like small ways – but in ways that are profound. Coupled with free modeling software like Blender, I want to tell you a story of how, in literally less than one hour and having purchased no equipment, I got exactly what I needed.

Even though in many ways we all have the same things, we still have custom needs. Maybe 80% of our needs are the same, and the industrial revolution did a great job of solving those needs. (In a supermarket, this amounts to about 150 items, according to The Organized Mind.) However, there are still many unmet needs that take a large degree of time and effort to address. Around here, I’ve had plenty of these “needs” that I’ve solved. From custom stair noses to airlock doggy doors to the solar powered mini-barn, I’ve created solutions by hand to more than a few unique problems. I’ve gotten used to these solutions being crazy and expensive. However, 3D printing is changing that.

I recently removed some fluorescent lights from my video studio. Some of the challenge was aesthetic, but mostly I wanted to address challenges with reliability as the lights were starting to fail. I opted for drop-lighting like you’d see outside. That meant converting the power supplies for the fluorescent lights to outlets that I could plug the strings of light into. The problem was that the drywall around these boxes weren’t finished well, because the drywaller knew they would be hidden behind lights – or, at least, they were.

I can certainly pay to have the drywall finished right up to the boxes, but that’s a labor-intensive process that becomes expensive. A larger than normal duplex plate would more than cover the gap, but finding what I needed proved to be an impossible task. So I decided to do something radical: print them.

I quickly went to the internet, found some duplex wall covers to get the basic shape of the outlets and ratios. I dropped that into Adobe Illustrator. A few minutes later, with the help of image trace, I had a basic shape. To that I added a circle at 143mm in diameter. The printer I had access to had a maximum Y dimension of 145mm, so I sized the cover to 143mm around. I had what I needed in a vector-based image file in black and white for the part I needed.

It took a minute or two to merge paths and output a SVG (Scalable Vector Graphics) file that I could import into the free Blender 3D modeling software. Unlike Illustrator, I had never used Blender. I watched a few videos at 2x speed and did a few searches and discovered the ability to extrude my 2D graphics. This would add depth. I settled on 1/8″ because it would be thick enough to stand up to long-term placement.

A few more minutes later, I had a 3D model that I could share with my public library.

I live in Carmel, IN and we have an amazing library. One of their recent additions is a digital media lab that, among other things, has two 3D printers. They charge a usage fee of $3-7 per part you print based on how much 3D filament you use. There wasn’t a way to email a part, so I drove the 3 miles to the lab and handed the librarian my model and answered a few questions.

Total time invested from the point I decided to create the parts myself to dropping them off at the library – less than one hour. I easily would have spent this trying to locate the exact part I wanted (assuming I could find it) and would have spent many more hours trying to adapt whatever I found to match what I need.

Sure, I didn’t have the part right that second, but a few days later – and one revision due to an error I made – and I’ve got exactly what I need. I would have waited for a few days to get something had I ordered it from out of town – so ultimately I got my solution in about the same time.

So what’s the point? Well, we’re moving to a time when anyone who can design something in 3D can have it made flawlessly by computers. We can already buy (or download for free) stock photography and print our own artwork for our walls. Print a picture on canvas and apply a brush stroke and who will be able to tell that it wasn’t painted?

As I was walking through a gift store recently, I realized that most of their wall hangings were either engraved sayings – which were public domain – or they were words over stock photography. What happens when it’s cheaper to have a piece of artwork custom printed for you and delivered to your door than it is to buy artwork from a gallery?

In the 3D space, why keep small parts? If you can keep a 3D model of the part, and if the printing material (PLA or ABS) is strong enough, why not just keep a printer and the models around?

I had the pleasure of working for a rapid prototyping company in the mid-1990s. We had SLA (Stereolithography) , SLS (Selective laser sintering), and a few more obscure prototyping systems available to us. The idea of 3D printing of a part isn’t new. What’s new are two things. First, the price point for a printer is $1,000 – or less – for something that used to cost hundreds of thousands of dollars. $1,000 isn’t a consumer purchase, but the smaller $200 units are. Oh, and they’re faster than the old machines, so you can get more throughput.

Second, the materials are more rigid. The materials that SLA and SLS used were notoriously fragile. PLA and particularly ABS plastic is sufficiently rigid to be the final product. With SLA and SLS, we were making casts of the prototypes to make copies, and then casting them into harder materials.

Having the materials that you can use directly, that can be produced more quickly, and at a price point that’s “consumable” – suddenly you have the door to mass customization shoved wide open.