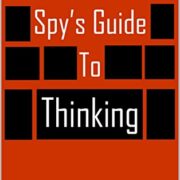 I never wanted to be a spy. Astronaut, yes. Spy, no. I’m not sure why. Spies are glamorized in the movies (unless it is Spies Like Us), but it wasn’t my thing. When the short book A Spy’s Guide to Thinking came across my path, I thought it was worth looking into. It’s a short book, a quick read, and more of an interesting aside than it is hard-hitting details about how spies think. Still, there are some interesting things from the book to consider.

In my head, being a spy means being at least a little bit paranoid. You’ve got to be on guard for people discovering who you really are and your mission. While this wasn’t an acknowledged component, the book centered around one encounter on a subway – which had nothing to do with being a spy, but could provide insight to how a spy thinks. Generally, the word would be “paranoid.”

The entire encounter kept asking the question about whether the other person knew he was a spy was. Great. He’d rule out that the other person was a spy catcher and then retest that observation over and over again. I suppose that is what makes a good spy. They’re paranoid.

Throughout the book, our spy did a loop: observe (data), orient (analysis), decision, and finally, action. The origin of this loop is John Boyd. He talked about how the most successful pilots can run the loop quicker than their peers. It’s not smarter that matters, it’s quicker through the loops.

Whether you use the word “observe” or “data,” “orient” or “analysis,” the result is the same. You observe the situation, assess or orient to the data you have, and then make a decision and act upon it. The loop – the slightly paranoid loop – was running frighteningly fast.

It’s interesting to view life through the lens of a spy, always wondering who knows what. A Spy’s Guide to Thinking really does get you thinking – about whether you could be a spy or not.