Blog
You are here: Home1 / Blog2 / Professional3 / Leadership4 / Book Review-What Got You Here Won’t Get You There: How Successful... 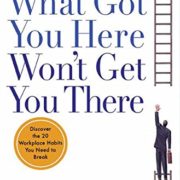 When multiple arrows point to the same place, you’ve got to go there. What Got You Here Won’t Get You There is one of those places. The book Who: The A Method for Hiring and The Power of the Other both refer to Marshall Goldsmith’s work. It’s a powerful reminder that you need to continue to grow and improve no matter how successful we are – that is, if we want to continue the upward spiral of success.

Goldsmith believes in the strong character of successful people. While not every successful person could be described as having an “unerring sense of direction,” most successful people know where they’re going – at least most of the time. They have a set of beliefs that carry them forward. The four beliefs are summarized as:

At some level, these beliefs are true, but they are also delusions. For all of us there have been failures as well as successes. Some challenges are more than they’re capable of – at the moment. (See Peak and The Rise of Superman for self-improvement.) Some situations are unwinnable. Finally, willpower has its limits. (See Willpower, Grit and The Happiness Hypothesis for limits of willpower.)

Kurt Lewin said that behavior is a function of both person and environment. (See Helping Children Succeed for more.) The Halo Effect reminds us that we live in a probabilistic world, not one of certainty. We can’t say that we will succeed. There is no certainty in the world we live in, particularly as we consider complex goals and objectives.

The “internal locus of control” that successful people believe in may be a fallacy, but it is helpful. (You don’t want to recommend that they read Mastering Logical Fallacies too deeply.) The belief system gives them the strength to keep on with the climb. (See Grit: How to Keep Going When You Want to Give Up and Grit: The Power of Passion and Perseverance for more on what it takes to keep going.)

Beyond the limitations of the beliefs that successful people hold, there are things that they do to hold themselves back. These are the brakes being applied while they’re trying to stomp on the gas. As you get into greater leadership and management roles, your technical skills matter less, and the skills that you have as a leader and manager can either make people more effective – or you can minimize people. (See Multipliers for more on maximizing people’s output.) The top 20 of Goldsmith’s 21 appear below (quoted):

The 21st brake on success isn’t always a bad thing. The problem is when it’s out of balance. A little bit of healthy goal obsession is necessary – like the mistaken beliefs about success – to be able to sustain the fight against the onslaught of storms. Goal obsession can cause people the problem of forgetting the ultimate vision for the sake of a minor point that doesn’t matter.

Goal obsession is getting the blinders on and forgetting that one small goal is nearly always a means to the end vision that you want. Sometimes making something work isn’t the right answer, because the cost is too high.

Looking back on Goldsmith’s list, he calls out that half of the items are based on managing the balance of sharing information and withholding information. Too far on one side and you share too much. You don’t allow space for other people to share. Too far on the other side and you withhold too much. You don’t support others in ways that you can. This is Goldsmith’s assessment, not mine.

I’ve certainly seen the effects of withholding in very personal ways. In Intimacy Anorexia, we found that withholding is the primary weapon of the intimacy anorexic. I’ve also been repulsed by people who suck all the oxygen out of the room with their incessant talking about me, me, me. However, I would say that his list is more about being comfortable with oneself than it is with something as simple as the degree to which you communicate. After all, the intimacy anorexic is withholding communication, because they don’t want people to know who they are.

Comfortable in Your Own Skin

Learning to be yourself should be easy. It should be natural. However, for many people, they’re not clear about who they want to be and how they will define themselves. As a result, it’s hard to be themselves. You can’t behave in a consistent way if you don’t know the ways that you want to behave any more than you can hit a target that you’re not aiming at.

Clarity on the kind of person that we want to be and making our wants and desires subservient to the goal of the person we want to be is difficult. It’s a challenge to stay focused on the end goal, on the character that we want to develop in ourselves, but it’s also the most rewarding.

Books like The Anatomy of Peace speak of the boxes that we get in where we are threatened or wounded, and how it causes us to behave in ways that are counter to the ways we want to behave. Folks like the Dalai Lama and Paul Ekman have conversations about eastern and western philosophies about Emotional Awareness. Tools like the Enneagram are designed to reveal our tendencies while also exposing the awareness that we can be more or less functional within our natural tendencies. (See Personality Types: Using the Enneagram for Self-Discovery for more on the Enneagram.)

Becoming the best you that you can be – being comfortable in your own skin – is a lifelong goal and its own reward. There’s a peace about knowing yourself and appreciating yourself for both the good and the bad.

Understanding that you are both good and bad is important. (For more on the good/bad dichotomy see The Lucifer Effect – Normal Evil.) More important than recognizing the good and the bad within yourself is the need to accept that this is one person, not two. You are both the good and the bad. In ancient Egypt, they used to believe that when you died, your heart would be weighed against a feather. Only those whose heart was as light as a feather would pass into the afterlife.

For the Egyptians, it wasn’t about the good or the bad that you did. It was how heavy your heart was that prevented the move into eternity. Unfortunately, too many people carry a heavy heart, which is burdened by the conflict between seeing themselves as either all good or all bad. (See Rising Strong for more on having an integrated self-image.)

Have you ever been in a public place where smoking was prohibited, and yet someone was smoking nearby? Have you ever gently reminded the person that their smoking was a violation of the rules (or the law) – only to be rebuffed as if you were the one doing something wrong? That’s misplaced blame. You’re pointing out that someone is not behaving according to socially-acceptable norms, and suddenly their focus is on you.

We’ve all experienced some degree of this in our relationships. Psychologists call it “projection” or “misdirection.” (See Changes that Heal for some of the mechanisms that people use to protect themselves.) The problem with misplaced blame is that we’re not taking responsibility for ourselves – and that limits our ability to succeed. We can’t resolve our issues if we’re unable to accept or see them.

Feedback is perhaps the most effective way for us to see what our limitations and challenges are. Feedback can be positive – allowing us to extend further in a direction – or negative – encouraging us to change our course. Feedback isn’t something that we – generally – want to hear, and it’s not something that other people want to do either.

Providing feedback is risky. It’s natural for people to view someone giving negative feedback more negatively than they might without any feedback. Even good leaders struggle to not hold negative feedback against someone. That’s one of the reasons why so much effort is put into creating safe, 360 evaluations for leaders. The people providing feedback need to know that they’ll be protected through commitment of the organization or through anonymity to be able to provide honest and forthright feedback.

One of the things that too few people are good at is apologies. Goldsmith advises to get in and get out with apologies, as the more one talks when making an apology, the more the temptation is to justify, defend, or support the action that one is apologizing for.

I tend to separate one aspect that troubles most people. I can be sorry for the impact on someone without necessarily accepting that I could have easily or possibly foreseen the outcome. That is, I don’t necessarily accept responsibility with my apology. I simply connect with the other person and acknowledge their pain or loss.

On the other hand, there are times when an apology that means more than “I’m sorry” is necessary. Sometimes it’s necessary to specifically outline the steps that you are going to perform to prevent further recurrences of the situation. This is particularly necessary when you’re responsible but also when the same problem tends to happen repeatedly.

Masters of relationships have another way of developing and maintaining their relationships. They have the gift of making the person that they’re speaking with feel singularly special. When you’re talking to them, their grocery lists, unresolved business issues, and distractions melt away, and their entire focus is on you. Bill Clinton is described as having this gift – that when you’re talking with him, it’s like nothing else matters. Whether you are, at that moment, singularly special and whether you like his politics or not is immaterial. There’s something special about being the complete focus of another human being.

Peter Drucker said, “The leader of the future will be a person who knows how to ask.” His statement is supported by research – though he couldn’t have known that at the time he made the comment. The efficacy of techniques like Motivational Interviewing is based on the knowledge of knowing how to ask questions in a way that helps people become more open. Have you ever been asked a question, and the instant you heard it you realized that the question was insightful enough to propel the conversation forward to a better understanding? That’s the art of learning how to ask the right questions.

How to Handle Me

What if people came with instruction manuals? What if everyone had a set of care instructions attached to their ears instead of earrings? What would it be like to know where they’re likely to be sensitive? While I doubt that we’ll start wearing care instructions on our ears, masters of relationships have learned to help others understand how they can bring out the best in the master.

Masters are self-aware enough to know where they’re going to struggle, and that, by coaching their peers and their subordinates on how they can best handle them, they’ll be better off as a team. In my relationship with our office manager, I had to share that I struggle when I feel like we’re not making progress. As a result, she adapted to a communication style that helps me see where we’re making progress – and highlighting where we’re not and why.

Not everyone is someone that you can form a healthy and productive relationship with. Some people just can’t be in a relationship (personal or professional) with another person in a healthy way. (See Intimacy Anorexia for more.) However, even when dealing with people like this, you may benefit from What Got You Here Won’t Get You There.