Book Review-Soul Keeping: Caring for the Most Important Part of You

Home Book Review Personal Book Review-Soul Keeping: Caring for the Most Important Part of You 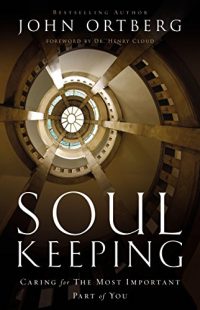 Book Review-Soul Keeping: Caring for the Most Important Part of You

In Soul Keeping: Caring for the Most Important Part of You, John Ortberg encourages us to think about what our soul is and how to care for it. For the most part, people don’t speak about our souls. Jewel sings, “Who will save your soul?” but most folks don’t know what it is. It’s sort of like the word “trust,” which most people believe they know the definition of – before they’re asked for the definition. (See Building Trust for more.)

Ancient writers believed that the soul was such a deep part of a man that they wrote about it in the third person. It was somehow disconnected, separate, and set apart from the body and mind. But describing it as deep, separating it into its own bucket, and addressing it with reverence doesn’t explain what it is. Nor does explaining that, when lives are lost on a ship or plane, they’re described as “souls on board.” Souls are of the highest value, but what are they?

Our souls are our essence. They’re the central part of our being and who we are really. If you strip away the trappings of our society, if you ignore the changes in our bodies over time and even look past the changes of our minds, you’ll find something core, something special, and, unfortunately, something that needs cared for.

The Curse of Busyness

Despite our progress over the past few decades in technology, medicine, and dozens of other areas, we’ve fallen short in one critical area. We’ve become more depressed. Each decade has greater rates of depression than the previous. Our generation is three times as likely to experience depression than the one before. To what can we attribute this rapid increase in depression?

One likely cause is the pace of the world today. Despite having more “caloric surplus” – that is, our ability to feed ourselves – we work more than we did a generation ago. Instead of being connected to the natural rhythms of life, we’re always in a constant hurry. We’ve been caught up in the curse of busyness.

Our soul was not designed for such a frantic pace. We’re not giving our souls a chance to keep up with the fast-paced life that we’re living.

Still, some find ways to avoid the busy and focus their energy on how to project good into the lives of others. It’s this projection of good that we call a blessing. It’s one human reaching into the life of another to improve it in some way. It’s one soul reaching out to another to help it on its journey of becoming.

What you amount to in this life isn’t the number of trophies (real and figurative) that you accumulate. It is not the bank accounts or the cars or the houses. The soul is what you take with you even when you have nothing else you can take. The soul is in the becoming.

“Becoming” means constant tending, like a garden, removing the weeds that threaten to choke out the fruits of the soul. Becoming is sacrificing the today for reasons of the eternal peace that can come when a soul is tended for the long term.

There’s no magic answers in Soul Keeping. There’s no one nugget of insight that will advance your career, save your marriage, or help you invest better. However, you just might find a way to tend to the most important part of you. John Ortberg’s journey always led him back to Dallas Willard and his ability to help calm John’s soul. Perhaps you can calm and rejuvenate your soul by reading Soul Keeping.

PrevPreviousAnnouncing the Implementing Information Management on SharePoint and Office 365 Course
NextBook Review-Wired for Story: The Writer’s Guide to Using Brain Science to Hook Readers from the Very First SentenceNext