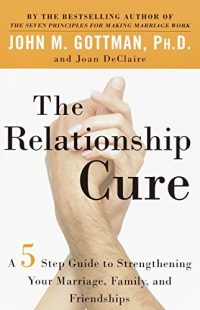 The Need to be Connected

Before we can get to how to make relationships better, we must first acknowledge that we need them. Not that relationships are nice, they make us feel better, or that it’s a good idea. We need to accept that relationships have helped us survive (See The Righteous Mind), that they reduce our illness (see Why Zebras Don’t Get Ulcers), and that they increase the span of our lives. (See Change or Die.)

In short, we need to get over ourselves and start getting close to others. This isn’t small. This is meaning of life stuff.

Auctioning Off Our Love

Gottman’s language for people’s desire to connect is a “bid.” (See The Science of Trust for more discussion on this.) We bid for connection with other people by asking a question, giving them a look, snuggling up with them, and in a multitude of ways. How others respond to our bids – and how we respond to their bids – is the basic transaction set in a relationship.

Interest happens on our emotional bank accounts driving us to ever higher levels of satisfaction – or ever escalating conflict. (See Choice Theory as a starting point for a discussion on confirmation bias.) When our balance is high we can accept or avoid service fees. Our positive affinity for the other person carries us through small withdraws.

The challenge in relationships is recognizing the bids – and having the capacity to respond in a meaningful way.

“Did you lock the door?” can be a simple transactional question or a question saturated with meaning. It can be a simple check to see if I need to go lock the door or whether it’s already done. It can be an accusatory question that contains in its sub-context, “You never do anything around here to help keep us safe!” It can also be an offer to go lock the door, so the other party doesn’t have to. One question with three – or many more – meanings. How can we, as humans, know which question is really being asked and whether there’s an embedded bid in it? In short, we don’t know. We must guess or try our hand at mind-reading (see Mindreading).

Where’s the embedded bid in the preceding question? The answer lies in the basic need for safety. The bid may be a desire for you to reflect your concern through demonstrating a desire to keep the other person safe. We often get to see these bids through knowing the other person and recognizing where and how they’ll make these bids.

It’s one thing to know that someone is asking for a connection with you – remember that’s what a bid is – and quite another thing to have the capacity to respond appropriately. No one can respond positively to every single bid that is laid out in front of them. That would be exhausting and enabling. However, safe, healthy people need to have the relational capacity to respond positively to some bids. (See Safe People and How to Be an Adult in Relationships.)

The true problem with relational capacity is that very rarely does someone retry a bid once it’s rejected. Gottman’s research suggests that, even in very good relationships, the retry rate is only 20%. That’s problematic, because it means that, even if someone is only rejecting one percent of the bids they receive, over time, there will be a substantial number of pathways for emotional connection that will be closed off.

Gottman refers to the work of Jaak Panksepp in his work at identifying seven emotional command systems. These are like the different personalities of the elephant in Jonathan Haitdt’s Rider-Elephant-Path model (see The Happiness Hypothesis). They’re the different ways that people are activated.

All except the jester systems map interestingly to Reiss’ 16 motivators (see Who Am I?):

It’s important to note that Jaak Panksepp doesn’t refer to these command systems with the labels that Gottman applied; however, instead he uses a model of seeking, rage, fear, lust, care, grief, and play. I’ll be digging into some of his more recent work soon to see if his research diverges with Gottman’s assessment – or not.

Most couples would admit that their fights aren’t about important topics – or at least they don’t seem to start out that way. Whether it’s a pass-the-milk kind of conversation or how to raise the children, the hidden messages are the important ones. Learning how to see the bids that aren’t made is an art form, and it takes willingness. There are tools and techniques (like those used in Motivational Interviewing) that can help you discover what the conversation is really about instead of just the context of the conversation.

To get a better relationship, we should be clearer about the bids we make, so we understand them and can make them clearer. Additionally, we should be more attentive when looking for the hidden bids. In a sense, we need to look past what we see to the feeling, power, and meaning of the conversation. (See Dialogue for more.) The topics that we use to discover the needs and desires of those we interact with are only tools for gaining a better relationship – or barriers in our way.

Will the Real Men Step Up?

One of the interesting bits of Gottman’s research is that women tend to turn towards their partner at about the same rate whether they’re in a good relationship or not. It’s the men that change their bid responsiveness to the environment – or to create the environment they want to communicate. From this, Gottman concludes that it’s men’s ability to turn towards during bids that has a substantial impact on the overall health of the relationship.

The impact of relational health in a family system extends beyond the spouses and impacts the children. Research shows that couples that have less conflict have more emotionally-adjusted children. However, there’s more to it than that. Gottman believes that families’ emotional philosophy falls into four general categories:

Obviously, the best approach is coaching. That’s giving children tools that they can use to manage their emotions. After all, all emotions are acceptable, but not all behaviors are.

Gottman quotes Ekman’s research on microexpressions (see Telling Lies and Cracking the Code for more on Ekman’s work). He also speaks about reading people’s body language to peer into how they’re feeling. Basically, The Relationship Cure is teaching basic Emotional Intelligence for social monitoring. A better source for this is Trust Me: Four Steps to Authenticity and Charisma.

Most people believe that, if there is a happy couple, they don’t have any conflict they can’t get through. However, Gottman’s research indicates that this isn’t the case. Every couple finds irresolvable issues, but they choose to deal with them differently. A healthy couple will acknowledge the disagreement and accept their spouse’s position, even if they don’t agree with it. They lean on their respect, love, and appreciation of the other person to allow the conflict to remain without causing harm.

The trick to a good relationship isn’t necessarily resolving every single conflict in a relationship – it’s learning how to more completely accept the conflicts that do arise.

One of the tent poles that effective relationships hang on are positive rituals. These rituals become a welcome reminder of the other person’s love and concern for you. For Terri and I, we sit on the bedroom floor of a morning while we’re getting ready. We call this “puppy love,” because we invite the dogs over to be loved. This is our ritual for every day that we’re both home. We follow this up with me making Terri a cup of coffee. It’s a simple thing, but it’s done so consistently that it is a daily tangible reminder that we love each other and that we’re “for” each other.

I don’t know that anything in the book individually will save a broken relationship. However, I know that many of the things – including rituals – will make a relationship better, even if it’s not The Relationship Cure.