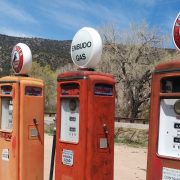 Creativity and innovation are taunting large corporate CEOs today. You’ve undoubtedly heard dozens of stories of large corporations getting ripped apart due to market forces created by tiny startups because of their creativity and innovation. Everyone lusts after that new idea that will make the business easier and bring in profit by the truckload. The desire to create an organization or even just a department that has the magic elixir of creativity that can unlock the innovation inside the organization.

The answer to the great elixir of creative corporate life may not be found in the rigid, rule-bound approaches that most organizations leverage for operational excellence. Instead of having a clear path of causal events from start to finish, creativity flows from random connections and half-baked ideas that slam into each other and create something unexpected.

Instead of looking for the cause of creativity that can be plugged into an organization like a gear in a complex machine, creativity comes from a set of conditions from which it can emerge. We’re not used to creating conditions and waiting for something to start. In business, there should be defined activities and predictable results, except that’s not what happens.

The model for creativity is much more like the growth of a tree from a seed. (You can find more in my review of Dialogue.) We can’t control the growth of the tree – or whether one will grow or not. We can create the conditions from which a tree can emerge from the seed by providing it soil, water, and light. Creativity needs a set of conditions to enable the possibility of growth. For creativity, there’s a master condition from which the other conditions flow.

The One Condition to Rule Them All: Safety

The crazy, silly, outrageous ideas are the ones we want. The ideas that have no boundaries, no boxes, no constraints, and no predecessors are the ones that can change the world. The only way to say something that may make you look stupid among your peers is to feel safe to look stupid. This perceived safety unlocks and enables the possibility for creativity and innovation.

Safety isn’t true safety any more than getting in a car and driving across the continent is safe. Safety is a perception. It’s a belief that you can venture out and expand. It’s the belief that, no matter what, you’ll be OK.

When safety is low in my adult children, we play a modified version of “worst-case-scenario.” In this version of the game, there’s no room for scenarios where the earth is crushed by an asteroid – because we can’t do anything about that anyway. In this version of the game, we play what’s the worst thing that you think could happen – and then we talk about the fact that they’ll still be OK. We take away the fear by ensuring that, if something bad happens, we’ll know what to do.

Safety in this case is internally generated. In a corporate environment, who are the most creative people? Can you find that one distinguishing mark that will allow you to locate them in a crowd? What if I told you that the most likely condition is the condition that they didn’t need to be there? Maybe their father died and left them a small fortune, or maybe they’ve amassed enough money that when they get tired of the job, they’ll just quit. Whatever the cause, the people who are the most creative tend to be those who believe that they have the least to lose. Consequently, these same people tend to be the hardest to manage – and all too often are encouraged out of the organization.

There’s little that can be done to foster this kind of internal safety – though making a conscientious effort to retain those that exhibit internal safety can help. For most organizations, generating safety means creating scenarios where it’s ok to fail. It’s ok to look bad. It’s ok to be different.

When you attack the stupid idea, you stomp on the wings of creativity. When you make it clear that the only ones who are promoted are those that think like you, you bind up innovation. When people don’t feel like they’re a part of the group any longer, they’re neurologically wired to play it safe.

The irony is that playing it safe isn’t playing at all. Playing is a necessarily risky business and one that evolution protected because of its inherent value. The value of playing is that it expands our very being. We learn and grow because we’re taking calculated risks to try something new. Doesn’t it sound like play is exactly the thing that we want with creativity and innovation?

We want creativity, so we can explore new things. We want to become, as an organization, something we’ve never been before. It’s no wonder why the most creative and innovative companies have playful cultures. They are very committed to getting things done – and at the same time, they play with doing it.

In most corporate cultures that I’ve visited over the last 20 years, there’s a lot of seriousness and analytics – and not much fun. They’re making progress, but much of that progress feels like a death march. (See my review of Play for more on how play is valuable.)

Simon Sinek has a favorite question inspired by a small child. The master question is “why?” Why do we do what we do? What is our purpose, and why is that? Why do we want to change the world? He explains that “what” without “why” is meaningless – and I agree. Too many people (and organizations) are plodding along in their lives (and industries) without a clear sense of why they’re doing what they’re doing. (See Start with Why for more on Sinek’s views on the ever important question.)

People will say that they’re working for a paycheck. How boring is that? Wouldn’t it be better to work for something you’re passionate about and for the company to pay you for that passion? Isn’t pay better when it’s the second (or third or fourth) consideration rather than the first? Even jobs that are seemingly not connected can be positions of importance.

Consider the sanitation worker at a Disney park. They’re sweeping up garbage and at the same time helping guests have their memorable vacation. The brick layer can either be toiling away in the sun or building a cathedral. One is working for money. The other is working for a purpose.

Creative and innovative teams have a passion for doing something important. They have a unifying purpose that drives them toward challenging the status quo and trying to make a difference. That passion makes them believe that the risks are worth it – lowering their need for safety.

Passion is often seen as the fuel behind innovation – and it is. However, fuel doesn’t always lead to the right results. Gasoline in an internal combustion engine creates thousands of micro-explosions per minute. The same fuel used in an uncontrolled way just creates an explosion. By ensuring that everyone in your organization can feel safe, you allow for the controlled and constructive release of their passion.

Passion may be the innovation fuel, but the real trick is allowing it to accomplish something useful in your organization.

Kin-to-Kid Connection: How Do You See God?