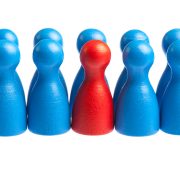 Organizations have missions and strategies. They differ but there’s one way that every organization is the same. Organizations are designed by humans for humans to work in. They are organized around the principles that the leaders believe will move the organization to its goals. However, more importantly, no organization can exist without humans. Despite this relatively straightforward observation, too many organizations don’t want humans to show up. They only want the happy pictures of tireless workers who never have their own issues that the organization should support them through.

Some organizations view employees as a simple exchange. It’s money for services. It’s transactional, and the organization can and should be less involved in the lives of its employees. During the mergers and acquisitions of the 1990s, the illusion of employment for life was shattered. Though we never fully held this belief in the US, we deluded ourselves into believing that, if we were loyal to the company, the company would be loyal to us. However, this was shattered, as tens of thousands of employees were displaced during mergers. (See America’s Generations for how our views have changed over time.)

With this implicit promise irretrievably broken, employees began to be seen as raw materials, like energy. They were to be used up during the production of the organizational goals. On one side of the chemical reaction was two raw materials, and on the other side was the desired product and the used-up capacity of one of the raw materials – the employee. Certainly, not every organization holds the extreme view of employees as a commodity or as disposable, but the view is still held in some organizations.

It’s a totally different perspective to see used-up employees as byproducts of the process, one which realizes that the organization’s goal is the furtherment of humans. Organizations may serve one, few, or many humans, but they’re always serving someone. In this service, they can expand the capacity of humans on the planet or transfer the wealth of one group of people to another group of people.

When organizations change their view from being all about money and shift it to understanding that being financially successful is integrated with the need to help move the human race forward, we’re left with an organization that sees every customer and employee as fully human. Sadly, this is all too rare.

Dehumanization of anyone makes us less as well. By dehumanizing others, we steal from our own humanity and from the broader group of souls who coinhabit this world. (See The Anatomy of Peace.) The more we can dehumanize others, the greater we understand that we, too, can be dehumanized. Our personal safety erodes as we seek to build ourselves up relative to others.

If you ask most executives what they want from employees, you’ll hear things like productivity, innovation, dedication, work ethic, etc. Rarely do you hear an executive say what they want most is that employees bring themselves fully to the organizations. Sure, they want collaboration as long as it’s quick and painless. Collaboration serves the master of productivity, so it’s a good fit – if it isn’t too hard.

Real humans and true teams are messy things. They don’t fit into boxes, and their issues don’t always align well to corporate priorities. Real people have weaknesses and faults. It’s easier to think of people as cogs in the machinery of the organization than it is to realize that everyone is broken but also valuable.

It’s easier to only see the Hollywood smile of an employee on a cardboard cutout of themselves. It’s easier to not have to worry about the faults and foibles that lay beneath the surface of every employee.

In the volatile, uncertain, complex, and ambiguous (VUCA) world that we live in, we need employees to bring their whole selves. We need people who aren’t afraid that their weaknesses will be the reason why they’re in the unemployment line next week. Their creativity depends upon their sense of safety. (See Drive and Creative Confidence for the impact of stress and fear on our ability to be creative.)

If your organization wants to be successful as an organization today, it needs to accept change and encourage the messiness of innovation and creativity through the recognition that employees are whole humans, and as such they need to be developed into their best possible selves, not just harvested for their capacities today.