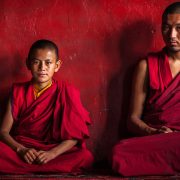 “Bless her heart.” The words seem to conjure up an image of a Southern belle speaking about a poor unfortunate soul that she pities. It’s a recognition of the suffering of another person without a connection, a desire to relieve their suffering, or a willingness to go out on a limb to help them.

Buddhism in particular calls us to be compassionate for our fellow man, but this thread runs through most major religions as well. Even evolutionary biologists admit that, as a species, we survived due to our willingness to help one another and alleviate others of our group’s pains and struggles. However, in the realities of every day life, how far should we go? Should we live the altruistic life so that we can be remembered as a hero, or should we play it safe and just pity the pour souls that cross our path?

Pity is such a toxic emotion. The person being pitied feels shame that they are the subject of someone else’s sympathy. (See Brené Brown’s Rising Strong for more on shame.) They feel disconnected and distant, because inside of pity is no connection. There’s only the unspoken message that you aren’t good enough. You didn’t make the cut.

Unlike the other ways that you can approach someone that indicates your understanding of their situation and the desire to help, sympathy or pity isolates them and actually lowers the person that you’re pitying. You believe that they’re less than or lower than you – and they often pick up this impression

While sympathy and empathy differ only slightly in their word construction, the difference in meaning is profound. Empathy means “I understand this about you.” Inherent in empathy is a connection. The connection may not be strong, but it’s present. As humans, we need connections. It’s a part of the way that we survived, so it’s encoded deeply into our DNA.

Empathy recognizes the suffering of other people and how that suffering may be affecting them. However, empathy stops in the world of thoughts and feelings. Empathy says nothing about how a person will behave. As a result, empathy helps someone feel connected and thereby may lift their feelings a bit. However, empathy doesn’t lead to change.

Compassion expands on empathy and connection with people, but it does so inside of the context of a strong desire to alleviate suffering. In Emotional Awareness, the Dalai Lama argues convincingly that, unlike sympathy or empathy, compassion isn’t an emotion, because it must be cultivated, it is an enduring characteristic, it doesn’t distort our thinking (as feelings do), and it is restricted to the relief of suffering.

Compassion is an amazing place to be with our fellow humans. Professions, like nursing, are built on the foundation of compassion. Professionally, there are discussions about topics like compassion fatigue, where the nurse expends their capacity for compassion at work and has trouble expressing it in the rest of their life. There are techniques to cultivate greater compassion for others, but often the challenge isn’t the need to increase the capacity for compassion, but to manage the disconnect between the way that folks feel they should be seen and the actual compassion that they’ve cultivated.

Compassion, true compassion, is hard to fake. By attempting to project a false image, we expend energy and build resentment within ourselves. (See How to Be Yourself for more on projecting a false image.) In professions – again, like nursing – there are times when you must protect yourself from feeling others’ pain too intensely so you can complete your work. Unfortunately, in needing to blunt some degree of your awareness and empathy for others’ pain, you can unintentionally stunt your cultivation of compassion.

It’s one thing to be compelled to alleviate the pain of another human, and it’s quite another to feel that so powerfully that you’re willing to risk harm to yourself. The fireman – or good Samaritan – who charges into a burning building to save a child demonstrates this level of commitment. They’ve moved beyond compassion into altruism – it’s the place of heroes and myths.

Heroes are known for their selfless sacrifice and their willingness to put themselves in harm’s way to alleviate the suffering of others. In the legends, myths, and movies, the hero ends without any harm, despite the risks. In the idealized world, the sufferer is saved, and the hero is victorious. However, this is the stuff of stories.

In real life, people get hurt – sometimes critically – as they attempt to save others through their altruistic acts. This is an unfortunate reality that we must accept. It’s also why altruistic acts need to be carefully considered and executed.

For most situations, altruism goes too far. Altruism creates the risk that you will not be able to be there to have compassion for the next person.

Too often, compassion explicitly or implicitly bleeds into altruism. Sometimes the choice is conscious, as a decision is made that this cause or this person is simply too important to give up on. Other times, we exceed our current capacity for compassion, and we continue anyway. This causes what’s seen as compassion fatigue and can cause real damage to our capacity to recultivate our compassion.

For the most part, we must avoid the toxicity of sympathy, move towards empathy and connecting with others, and through to developing compassion for their suffering and the willingness to help them change it. At the same time, we must learn to stop short of altruism, except in the very rare conditions when the personal risk is well justified based on our personal convictions and our possibility of transforming a situation with our willingness to accept personal risk.

Cultivating compassion in every interaction while acting in a way that is consistent with our capacity should be everyone’s goal.

PowerApps Forms: Bad and Too Many Updates