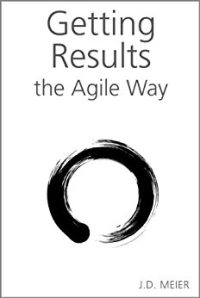 JD Meier and I know and have worked with the same people. We had exchanged a few emails and were casually acquainted. Over a year ago, I was trying to start a series of articles on developer productivity, and I reached out to him for sage advice. I discovered that he had written a book about personal productivity – Getting Results the Agile Way – and so I wanted to see what he would say about how to be productive in life. True to form, he didn’t disappoint.

Despite this, my review of Getting Results the Agile Way has been stuck for over a year.

Just because you respect someone doesn’t mean that you process information the way that they do. I think that is why this review has been on pause for so long. Everything for JD is a list. For me, I make lists up on the fly and then change them as needed. The frameworks that I build are more like willow trees, bending and changing shape to let the wind move past them. JD’s approaches are mechanical and consistent.

I’ve encountered other books that are very checklist oriented – like Michael Hyatt’s Platform. For me, it was hollow. I could see that when I read it. However, with Getting Results the Agile Way there was something more. JD really understands the concepts and perspectives behind the agile movement and at the same time distills them into practical steps that can be used by anyone – whether or not they comprehend the core tenets.

In the end, what caused me to be able to finish this review was the twin awareness of our differences in thinking and recognizing that his audience wasn’t me. His audience is the millions of folks who are trying to get more productive, more enjoyment, and more joy out of their lives, and they want to do it with a recipe book – rather than learning chemistry and physiology – so they can understand how to make a good meal. You can get good at cooking if you understand chemistry and how our bodies respond to food, but it’s the long way around if you just want to cook some good meals.

Both JD and I grew up as developers. In our quest to become better at our craft, we stumbled across and embraced agile methodologies for software development, but JD recognized the applicability to some of the core concepts to other areas of your life. In fact, he identifies the following areas of life, which he calls “hot spots”:

He takes the agile lens and applies it to these areas of his life. (The ONE Thing has a similar set of areas that are areas of focus.) One of the traps that many people struggle with is that life is so complicated that it’s difficult to get your hands on how to move it forward. (And, as Extreme Productivity explains, sometimes even your best made plans aren’t where you’ll end up.) Getting Results the Agile Way is effective at breaking the problem down into different dimensions so that you can make small but measurable progress in one area of your life, then turn your focus to the next area of your life. By processing in sequence, you don’t get overwhelmed, and, over time, you can make progress.

Imagine that you’re back in the late 1800s, and you hear about two competing groups that are trying to build the first powered flying machine. The first is a well-funded and respected professor out of Chicago named Langley. The second is a pair of brothers who run a bicycle shop in Dayton, OH. They have no background. They have no research support. However, somehow the Wright brothers manage to fly before Langley. How is that?

Much has been made of the publicity surrounding Langley and the fact that he couldn’t fail – but then again, they would say similar things about the Titanic a little more than a decade later. The difference was that the Wright brothers failed over and over again, learning from each attempt. They built wind tunnels and tried to solve what would now be called “engineering problems” even when they couldn’t test full-scale machines. We now know that the Wright brothers were successful – but the reasons why they were successful have as much to do with agile thinking as Langley’s approach was like waterfall development.

When the Agile Manifesto was first introduced, it was a radical departure in software development. Waterfall meant long planning cycles and monolithic projects that did one big delivery and were, for the most part, done. While this was never the intention of the waterfall software development lifecycle, bringing in project managers who were only experienced with developing projects in the physical world necessarily made it difficult to iterate. Agile software development didn’t just turn over the idea of a single release towards a model of continuous release, it challenged several other ideas as well.

Trying became a first-class citizen. Failure wasn’t just an option; it was a certainty. Instead of denying that failure was real, it was embraced and accepted. Failure was recognized as a step in learning, growing, and becoming better. Agile approaches do view problems differently while acknowledging that a more accurate view of reality is important.

JD summarizes the differences as:

Throughout the book, he summarizes key points and makes lists for you to return to when you’re struggling to see the world in a helpful way.

Long ago I learned a skill that’s been with me. I learned it from project management and think of it as managing my risks; but in JD’s language, it’s doing the worst things first. That is, whatever is risky or dangerous or might not work gets done first, as do the things that you don’t want to do.

This is frustrating from a startup perspective, because it means that you’re slaying all the dragons and you’re not getting to experience the thrill of the countryside. However, in my experience, lives and projects go off track when you wait until the very end to try to do the hardest parts. By then, interest and energy wane, and sometimes it’s not enough to get things done.

JD’s right on target as he speaks about the challenges of energy management. Recognizing when you’re the most powerful and have the most energy is an important first step. Recognizing what things bring you energy and help build you up is a solid second step. Time is the one commodity that we have a fixed amount of. Energy can be cultivated, and it’s the energy to get things done that makes time valuable.

Agile resets the energy clock at each cycle. Each day, week, month, year makes a new cycle of energy available to you – if you know to look for it. Constantly seeking energy and learning how to cultivate it in yourself and can give you what you need to get results.

The Wright brothers celebrated each of their small successes, recognizing they’d have another the next day – but at the same time, they had one less problem to solve.

One of the secrets to getting results is staying motivated long enough to get them. It’s one part productivity and efficiency and another part persistence – keeping your shoulder to the work until it’s done. (See Willpower for more on the components of willpower.) Maintaining motivation requires an understanding that everyone can expand themselves through work. We aren’t born with a skill, and if we try and fail, we’ll never be able to do something. (See Mindset for more on our ability to grow and expand ourselves.) The truth is that we live in a probabilistic world, where the ability to do something relies on more than the situation and our capabilities. There’s a certain amount of randomness to life that we have to accept. (See The Halo Effect for more on our probabilistic world.)

The Rule of Three

One of the rules that I struggle with most is the rule of three. That is, I should only have three things that I’m working on in any given period. That isn’t to say that you can only do three things a day. Rather, it’s that you shouldn’t have more than three areas of focus. Here I feel challenged for the same reasons I mentioned while reviewing The ONE Thing – there are more than three areas. How can I focus on only three areas when there are so many areas to focus on?

The answer seems to be that there are things you’re just keeping going, and there are things you’re actively developing. We’ve got projects around here that we occasionally put a bit of energy into. They are not, however, areas of focus. The goal of the rule of three isn’t to limit you. It’s to allow you to focus enough energy into a single direction so that you can see progress. (See Predictably Irrational for more on our aversion to letting things go and focusing.)

One of the things that I learned in the development of books and educational materials is that they’re never perfect. There’s always the ability to get another review, do some fixups on the content, or do something that would make the content better. The challenge that the lean philosophy addresses is not making investments that the customer doesn’t find value in. Lean relentlessly removes waste and parts of the system that don’t add value. In the book development process, the number of editors has been steadily scaled back over the last 20 years. We used to have half a dozen people crawling over content to make it better. Now, that number is probably half that.

The tricky part is knowing when the effort is important and necessary. Having friends in the publishing industry, I know that there are books that absolutely took more to produce because they required precise layout, color prints, etc. But these books also stood out from the crowd because of their quality, and thus they sold well. The quandary is how much energy and time should you put into a book – or any project – to make it right?

By fixing time you can dodge the question. You can say that, while scope may be hard to figure out, you can time box and deliver what you have when the timer expires. This is at the heart of agile thinking. When the sprint ends, whatever you can add to the delivery is what you have. Whether it’s enough for the customer or not is for them to decide.

In the physical world, when you’re finished with something, it’s often hard to modify. However, in relationships and in other ethereal contexts, sometimes you just must define how much time you can invest in the project.

In the end, whatever you do is only measured by the results that you get. JD provides a useful structure for evaluating results:

JD offers up dozens of other tips, lists, keys, and ways to convert the relatively loose framework of agile thinking into something that you can use to improve not just your software development but your life as well. To do that, you’ll have to read Getting Results the Agile Way.