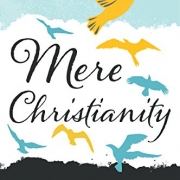 Most folks don’t describe Christianity with the adjective “mere.” However, C.S. Lewis isn’t most folks – rather, he’s a common man with an uncommon view. Mere Christianity is the written record of what started as a series of BBC broadcasts to help explain what Christians believed. He didn’t speak as an authoritative source who had dedicated his life to the scholarly study and application of ancient texts in Christianity. He came as a man who could see to the heart of Christianity and who could speak so eloquently that anyone could understand what he saw in it.

The One Denomination to Rule Them All

Lewis quickly dispensed with the internal conflict that pits Christian against Christian and divides the one brotherhood into many different factions. He describes a great hall off of which each of the denominations has a room. He invites us to stand in the hall, accepting the rules of the house – the rules all Christians believe – but also to move into a room where we can be comfortable and fed.

To Lewis, it seems, all of Christianity receives the benefits of the house, no matter which room you’re in. He has no quarrel with someone who believes in Christ but believes slightly differently about things that matter little.

Finding our individual paths isn’t easy. There are times when we’ll end up off track. Lewis has a way of conveying the fundamental truths about finding your path that is both practical and direct. Whether it’s reminding us that going farther in the wrong direction doesn’t bring us closer to our goal or that progress isn’t just changing, it’s changing for the better, Lewis is gently reminding us that, in whatever journey we’re on, we must keep the end in mind.

With understanding Christianity, our goal is to understand how to behave more like Christ would behave. Before this, however, we must think through how we have come to believe this goal. We must move through the theological and ideological challenges that have been laid at the feet of Christianity and be able to explain them to ourselves with reasonable satisfaction.

It’s only then that we can start on the path forward to find where walking in Christ’s footsteps will lead us.

It’s not like Christianity is the only game in town when it comes to religion. However, there are some distinct differences. Christianity is the only religion where your sins have already been paid for – you’ve been redeemed. Sometimes, however, other religions are more appealing. They provide the same comfort of believing in a benevolent power greater than yourselves with none of the guilt.

Still, Lewis remains open to Christians to considering other religions and believing that they may have some hint of truth. After all, when you’re dealing with an omnipotent, omniscient, omnipresent being that created the universe, it’s possible that we may not be able to fully comprehend him.

Injecting common sense into a difficult argument, Lewis points out that free will opens the door to evil in the world. However, at the same time, the only way to truly express love, goodness, or joy is to do it freely. Free will is an expensive tool that makes it possible to see into the hearts of men and illuminate meaning and intent in ways that perfunctory words could not.

The God of the Material

The Christian (and therefore Jewish and Muslim as well) God is said to be a jealous God. We’re to make no god before him. However, what does that mean? Certainly, the Bible is clear about making golden calves, but few people would do that today. It doesn’t need to be taken in the completely literal sense. Having a god before God can be anything that takes the place of importance.

Book Review-Leadership for the Twenty-First Century

Book Review-The Hope Circuit: A Psychologist’s Journey from Helplessness to...
Scroll to top
%d bloggers like this: