Book Review-Top Five Regrets of the Dying: A Life Transformed by the Dearly Departing 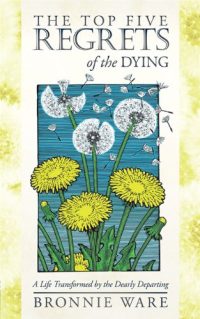 Book Review-Top Five Regrets of the Dying: A Life Transformed by the Dearly Departing

In our modern cultures, death is hidden, both physically and emotionally. If we acknowledge death as a part of life, then we must confront our own mortality, and that is something few are willing and able to do. However, some professions come face to face with death every day. Whether it’s emergency responders, health care workers, or palliative care, death is an inescapable reality. It’s from this experience that Top Five Regrets of the Dying: A Life Transformed by the Dearly Departing comes. Bronnie Ware worked as a palliative care giver in Australia, and she recorded the things that she learned from her patients to share with all of us, so that we can learn the lessons before the end of our lives.

The list doesn’t match what you might reasonably expect to find. If you look at the values we have as a society, you might expect that the dying would have wanted that one last deal. Perhaps you would have expected to see something like having purchased that special car. Instead, what you find are deeply connected and deeply personal topics:

The general theme is not one of personal achievement but rather one of personal courage. The courage to be yourself, to accept happiness, and to stay connected with others. It turns out the things that we think are so important as we go through our daily lives aren’t so important in the end.

There are two types of surrender: surrender accept and surrender defeat. When we speak of surrender, most people see the white flag, and they consider what it’s like to surrender in defeat. They think of what happened when the Confederates had to accept that the Union had won. However, this is not the most powerful and healthy kind of surrender; that’s surrender acceptance.

To some degree, the difference is one of perspective – and timing. Surrender defeat often leaves no choices. Surrender accept is full of choices. It’s a conscious decision to not fight the situation around you and to accept whatever the world has to offer.

Surrender acceptance is a courageous and difficult act. We let go of the illusion of our control and instead focus on how we can get the most out of life without fighting it. It’s a courageous act to accept our lack of control, because this puts us at higher perceived risk.

However, what you get back by not expending energy in the vain attempt to control situations can be immensely liberating. You have so much more to offer when you’re not wasting energy on a pointless fight.

To Thine Own Self Be True

It’s frightening to be yourself. What if people don’t like you? What if they reject or criticize you? If you’re projecting an image and someone doesn’t like it, you just change the image you’re projecting. No big deal. However, if it’s the real you, those rejections, corrections, and challenging conversations can be difficult and painful.

It looks easy on the surface. You just project an image that others will like, and, if they do, you get to feel good that they like you. There’s a catch though. The catch is that they really don’t like you. They like the image you project. As a result, you don’t ever get to know if someone really likes you – you don’t get to have a real connection with another human being. And as a result, you may end up feeling disconnected and alone. Loneliness – being isolated and alone – is one of our deepest fears (see Loneliness).

What would it be like to accept that some people do not like you and other people do? How would it feel for some people to reject you – but others embrace you with open arms? This is what those who contemplated their lives were looking for, that connection to other people that somehow validates they were real, important, and valuable.

As humans, we’re machines for predicting the behaviors of others (see Mindreading and The Blank Slate). We know that other people generate predictions for our behaviors. They’ve got their own set of values and beliefs that drive how they think other people ought to behave. Our parents, our families, our colleagues, and our friends all have expectations of us. For the most part, our fear of being rejected causes us to try to live up to those expectations.

We sometimes get so wrapped up in being the person that other people believe we should be that we sometimes forget to be ourselves. That’s the first regret. That we didn’t live a life true to ourselves – not to others’ expectations of us.

Stepping out of their expectations takes courage. It takes willingness to be real and authentic. You can’t get that authenticity just through working a job. You must work at life to be authentic all (or most of) the time.

No one is knocking hard work. Peak tells us that working purposefully towards a goal can make us the best of the best. Mindset teaches us that it’s not what we’re born with that matters. It’s what we’re willing to do to grow. It’s not that hard work is bad. However, in the end analysis, we too often get wrapped up in work and forget to have relationships.

Sometimes it’s the certainty of the rewards. If we work, we’ll create something, and we’ll be praised or financially rewarded. Work is a convenient way to reminding ourselves of our value. One more project done. Another award to put on our resume. Work is often a place where folks can see tangible and nearly immediate rewards for their work.

Sometimes, it’s just life. We get so caught up in the treadmill of making enough money to live that we forget to have a life. We become obsessed with making money, so we can survive. Sometimes, that survival isn’t really at risk. We decide that we need the new car, and that takes money, and so does the new house or the private school for the kids or something else. When you add these things up, they start to take more and more financial resources, and eventually you must work hard just to pay for your things.

The regret of hard work is less about accomplishing things and more about the addiction to work that keeps people from the hard work of relationships.

Feelings, Nothing More Than Feelings

If there’s one irrational fear that can stand in the shadows and condemn people, it’s the belief that their feelings aren’t “right,” acceptable, or justifiable. Somewhere in the deep recesses of our mind, feelings emerge, and we fear that they may not be the right feelings. We don’t know how they come to be or what to do if they’re not right.

As a result, we often disconnect ourselves from others by ignoring or hiding our feelings. We don’t have to accept others’ ridicule of our feelings if we don’t share them – and if we don’t acknowledge them ourselves. The result is that we somehow end up as half a person. We end up denying part of our very existence – and for what?

The reality is that all (that means every) feeling is acceptable. It’s the feeling that you have, and it comes from somewhere deep inside of you. Something about your experiences and your beliefs leads you to it, and it’s always acceptable. It’s important to note that not all behaviors – the responses to a feeling – are OK, but the feeling itself is. Said more concretely, it’s ok to feel angry but not to punch someone in the face.

It’s difficult to speak to the fear in the corners of our mind and quiet it when we feel like we’re unlovable. Our feelings are taking control of us – and being irrational isn’t acceptable. Except that it is. Our feelings are designed to help us survive. In fact, they’re the basic wiring that helps us survive. To deny our feelings is to deny a part of ourselves. That is what far too many people regret having done. Too much denial of who we are and the validity of our feelings over the course of a life.

With a Little Help from My Friends

We live in an age where it is easier to stay in touch with – and reconnect with – friends than ever before. We can keep connected via LinkedIn or Facebook. We virtually follow friends as they move, take new jobs, go on vacation, and so on. We have internet search tools and companies willing to help us find lost contacts. The tools that are at our disposal are like ones that couldn’t have been dreamt about a generation ago.

Despite this, more and more people report having fewer close friends. (See Alone Together for more.) We’ve become more connected and disconnected all at the same time. Instead of staying in closer touch with those we care about, we tend to connect less. There is some good news, as reported in When: older people have fewer friends, but because they’re actively pruning relationships to only those that are emotionally meaningful. In other words, older people are starting to focus their energies on those who matter most. That may allow them to be happier.

The final regret is the failure to find ways to bring more happiness into their lives. While happiness is an elusive prospect, as we’ve seen in Stumbling on Happiness, The Happiness Hypothesis, Hardwiring Happiness, Flourish, and The Hope Circuit (to name a few), it’s a good goal to seek more happiness in our lives. Sometimes our happiness is blocked by a hurt that we just can’t let go of. Maybe it’s a loss that we can’t get past. It might be a betrayal that cut too deeply.

Sometimes we believe we don’t deserve happiness. Maybe we did something bad (guilt). Maybe we feel like we are bad (shame). Whatever the root cause, we feel like happiness isn’t something that we can or should aspire too. It’s too much to ask.

Blocked happiness appeared too often in Bronnie Ware’s care of people. It occurs too often in life. Maybe if you read The Top Five Regrets of the Dying, you’ll be better able to live the life you’re given fully and completely. Maybe you’ll find your way to death without any regrets.

PrevPreviousBook Review-Fried: Why You Burn Out and How to Revive
NextBook Review-The Ethnographic InterviewNext